Khmer Rouge genocide in the minds of Cambodian youth | Asia | An in-depth look at news from across the continent | DW | 20.07.2018

Khmer Rouge genocide in the minds of Cambodian youth

A tradition of silence surrounds the horrific atrocities committed in Cambodia under the Khmer Rouge regime during the 1970s. How do the nation's youths view that difficult part of their history? 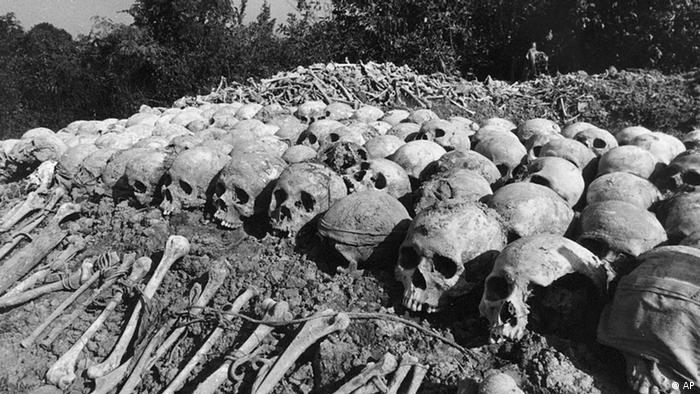 It is estimated that between 1.7 and 2 million Cambodians died at the hands of the Khmer Rouge regime during its nearly four-year reign of terror, from 1975 to 1979, with little outcry from the international community.

The Khmer Rouge, formally the Communist Party of Kampuchea, was headed by a communist revolutionary, Pol Pot, and took control of the Cambodian government in 1975.

Their goal was to turn the nation into a communist agrarian utopia. In reality, however, during the regime's three years, eight months and 20 days in power, millions of people were forced into labor camps where they were starved and abused.

The Pol Pot's government emptied the cities and enslaved the population in rural gulags, where people worked to death and were executed for minor infractions. It not only targeted intellectuals and educated professionals like doctors, teachers and journalists, but also executed old and infirm people, among others.

Nearly four decades after the collapse of the brutal regime, the atrocities committed during this era still scar the collective consciousness of Cambodians. But many in the country are still not comfortable talking about the Khmer Rouge and their experiences.

Rithy Odom, a student at the Royal University of Phnom Penh, said that his parents do not talk about it very often. "Only if I ask them, they would tell me how they managed to survive during the regime; how they migrated and what they ate during that period," the 20-year-old student told DW.

Odom added that it's important to be well aware of one's history, as it helps people to avoid repeating the mistakes made in the past. "Sometimes, I can't help but think about all the unimaginable horrors that can happen to people. It is so painful just to think about it."

When asked about his view on the Khmer Rouge regime, Odom said, "their leaders were overpowered by their own ego and ambition; they were big fans of extreme socialism which eventually led them to their own demise."

Unlike Odom, not everyone is open to talk about the Khmer Rouge. Sin Sovannleakhena, a multimedia design student in Phnom Penh, says she isn't interested in the topic.

"I am aware of our tragic and painful history, the conditions that people had to face back then. No matter how much we speak about it now, nothing will change anyway," she said.

As it struggles to leave its past behind, Cambodia appears to be facing a generational gap when it comes societal awareness about the Khmer Rouge.

A survey of 1,000 Cambodians aged 18 and above, conducted in 2011 by the University of California, Berkeley School of Law, concluded that many young Cambodians were not sufficiently aware of the brutal crimes committed by the regime.

It revealed that a third of the respondents who did not live under the Khmer Rouge lack knowledge about the war crimes court that was subsequently set up to investigate the atrocities and bring the perpetrators to justice. The court is known formally as the Extraordinary Chambers in the Courts of Cambodia (ECCC).

Youk Chhang, director of the Documentation Center of Cambodia (DC-Cam), an NGO, says young Cambodians know little about the history of the Khmer Rouge.

To raise awareness, DC-Cam, with support from the education ministry, is implementing a book project, which aims to ensure that students all over the country gain knowledge and understanding of this regime. "There are over 1,700 high schools in Cambodia. We have managed to send the textbooks to all the schools, roughly about half a million copies," Chhang said.

Royal University student Odom said, "I think youth must be informed about the history in order to avoid taking the wrong path that our seniors took. We are the only hope Cambodia has."

Khieu Samphan, a former Khmer Rouge leader, denied accusations that his former government was involved in the mass genocide in Cambodia. He and another senior cadre, Noun Chea, already received life sentences. (23.06.2017)

An Angelina Jolie-directed movie about the Khmer Rouge, recalling the atrocities and agony suffered under the regime, is going to be launched this weekend at the fabled Angkor Wat temple complex. Ate Hoekstra reports. (17.02.2017)

A UN-backed war crimes tribunal has dismissed charges against a former Khmer Rouge cadre. In 10 years of work, the court has jailed three people responsible for the horrors of the Khmer Rouge regime. (22.02.2017)