A drastic shift in EU agriculture policy to ensure survival of family farms and ecologically grown foodstuffs has been urged by protesters in Koblenz. The city is hosting EU farm ministers until Tuesday. 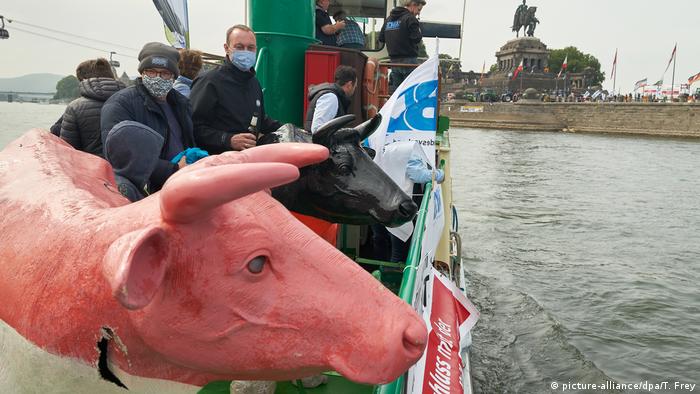 Police said 350 protesters, some on tractors and in animal costumes, headed towards the venue, a riverside palace, while a cross-European alliance, including bio farmers, environmentalists and slow-food advocates, put its turnout at 1,300 persons.

Koblenz lies at the junction of the (larger) Rhine and Moselle rivers in Germany's state of Rhineland-Palatinate.

The alliance of 400 European civil society groups, calling itself in Germany "We are fed up with the Agra industry" (Wir haben Agraindustrie satt!) and "Good Food, Good Farming, Europe, urged ministers to make "radical" changes to the EU's Common Agricultural Policy (CAP).

At €55 billion ($65 billion) a year — roughly a third of the bloc's budget — CAP's allocation of flat-rate subsidies for land areas farmed was clearly out-of-date and should be oriented instead toward the new European Commission's Green Deal plan, said the alliance.

"The Green Deal sets the course that the post-CAP must follow," it said, and ministers must "ensure" sustainable food sovereignty for future generations and rebuild ecosystems, soils and resilience in rural livelihoods.

Current EU policy of fetching cheap, unsustainable imports also degraded land in developing countries, said the alliance, echoing a German finding in June that Germany's "footprint" through imported foodstuffs was three times heavier abroad than on its own soil.

Germany, which currently holds the EU's rotating presidency, had an "immense" responsibility to bring a CAP reform into line with climate and biodiversity goals, the alliance insisted, directing its remarks at German Minister Klöckner, who hails from Rhineland-Palatinate.

Klöckner, who has floated a European animal welfare label and an EU "farm-to-fork" campaign to reduce usage of herbicides, fertilizers and antibiotics, drew a caution Sunday from Joachim Rukwied.

The farming federation president — for German growers,  and Europe's association Copa — said extra costs should not be imposed on farmers, who instead should get supplements to their incomes for environment protection and animal welfare tasks.

The alliance of civil society groups said EU policy of recent decades of rewarding large landowners had "fueled" a massive concentration in farm and land ownership.

Across the EU, between 2005 and 2016, more than four million farms — often family-run livelihoods — had been forced to shut down due to economic pressures.