Grazing wasteland in the heart of Bristol, Street Goat is bringing community together around sustainable milk and meat, and conserving local biodiversity. 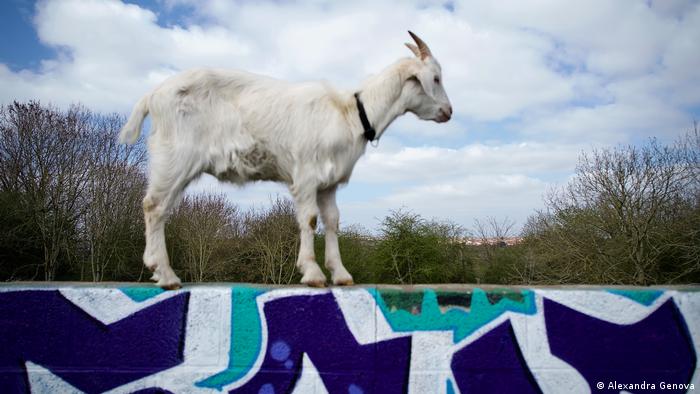 Street kid: A goat takes in the view on Bristol's Purdown Hill

The BT Tower, one of Bristol's iconic landmarks, rises up from Purdown Hill in an area of inner-city parkland, where twin goats lounge in the sun against the remains of World War II gun batteries. These dystopian concrete relics — now covered in the city's fabled graffiti — have played host to a lot of "anti-social" activity over the years.

But since the goats moved in, Purdown Hill has transformed, says urban farmer Mary Dobbing. "People living alone come for a reason to get out and families bring their children every day to look at the animals," Dobbing says. She's keen to stress, though, that this isn't a petting zoo. "People can be shocked that the goats are not pets and will be eaten one day, but we have to maintain that this is a working farm."

Street Goat isn't your average farm. It operates over two grazing sites — five in winter — and three micro-dairies in and around Bristol. Members like Dobbing pay an annual contribution of £70 (€81, $97) and work a minimum of one milking shift a week. 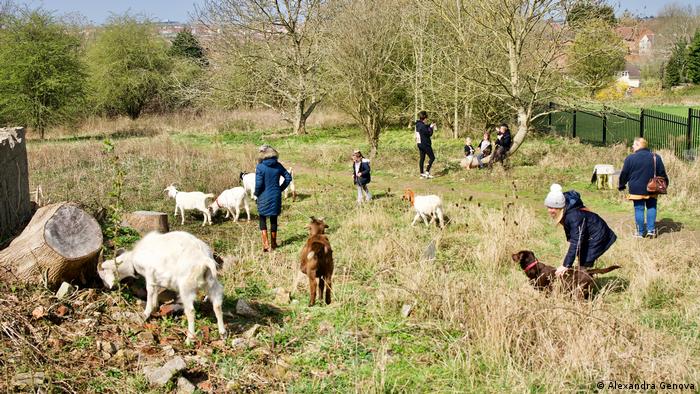 Mary Dobbing joined Street Goat after getting involved in permaculture in Bristol. Despite her affection for the animals, she's unsentimental about the fact that they are livestock destined for the dinner table

None of the dairies are licensed — for that they would need to meet very strict commercial standards — but since the members effectively own the goats, the dairy produce is for personal use. The meat, however, can be sold since the animals are slaughtered at a local abattoir in Langford. And there's always a waiting list when they are.

'The best of both worlds'

Street Goat's first site when it began in 2016 was at an allotment ground next to the Troopers Hill nature reserve in east Bristol. One of its two dairies is still nestled among the veg plots. The goats sometimes escape and trample neighboring crops, but manure buys the gardeners' forbearance.

Today, longtime member Guru Thiru is showing trainee Ellie Kenyon the ropes of the 7:30 a.m. milking shift. Kenyon is getting her hand in with Lily, a white-haired 10-year-old Saanen goat who is extremely tolerant of accidental tugging.

Once Lily and Bronwyn — a Golden Guernsey who was bought from a local farm — have been milked, Kenyon and Thiru tend the grazing site and bottle up the product to take home. Kenyon uses her milk to make cheese, a simple process of heating and adding lemon. Thiru pools his with his two flatmates, both Street Goat members, to make labneh, a Middle Eastern-style yogurt. 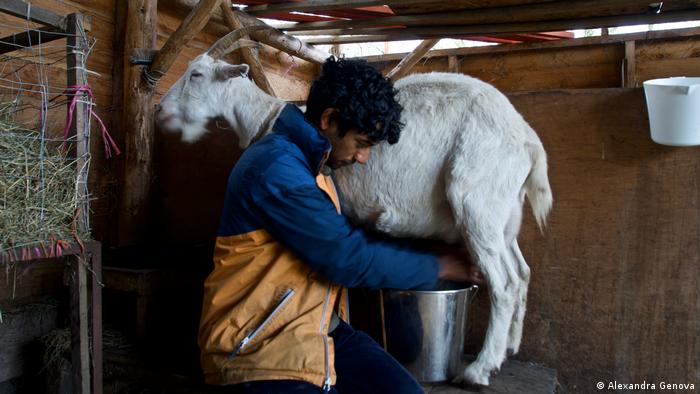 Guru Thiru on his milking shift. For him, Street Goat brings the best of rural life into the city Guru Thiru and Ellie Kenyon at the Troopers Hill Dairy

Thiru came to UK from Sri Lanka when he was 5 due to the civil war. Seven years later, the family made a return trip and Thiru's mother and aunt gave him a goat called Lakshmi with whom he bonded over a summer spent in the county of his birth; so began his love affair with the animals.

Working with Street Goat is rewarding in ways that his day job as a user experience designer often isn't. Thiru is passionate about working with livestock and engaging in food production on a community level. But as a queer person of color, he says rural life could be isolating. "So, I find myself trying to find a balance between urban and rural life, between access to land and the people I crave to be around," Thiru says. "Street Goat captures the best of both worlds."

Street Goat is part of a growing number of community supported agriculture (CSA) farms across the UK that allow people to take part in sustainable farming and regenerative land management and take home the produce. Some CSAs are producer-led, others owned by the community.

What they have in common is that they grow from grassroots initiatives that address food and farming problems specific to their area. For Patrick Holden, dairy farmer and founder of the Sustainable Food Trust, CSAs like this are a welcome response to the global ecological crisis.

"What is the solution when we have devoured the planet's resources through unsustainable farming methods?" Holden asks. "People want to be part of the solution, which is the relocalization of food systems: Consuming food with a known story from farms near where you live."

Even if where you live is a long way from green rolling hills. At the Purdown Hill site, the goats are actually helping conserve their urban environment.

The historic gun batteries had become overwhelmed with bramble, ash saplings and ivy over the years, causing degradation of the concrete. "That's exactly what goats love to eat, so we brought them here with permission from the council, saving them a lot of money," Dobbing explains.

"It's about encouraging biodiversity," says Carol Laslett, who joined Street Goat at its inception back in 2016 and oversees grazing. "Over at the Bristol Parkway site, for example, we have a rare small butterfly that only lays eggs on kidney vetch, so the goats work to keep the scrub down to allow that to flourish." 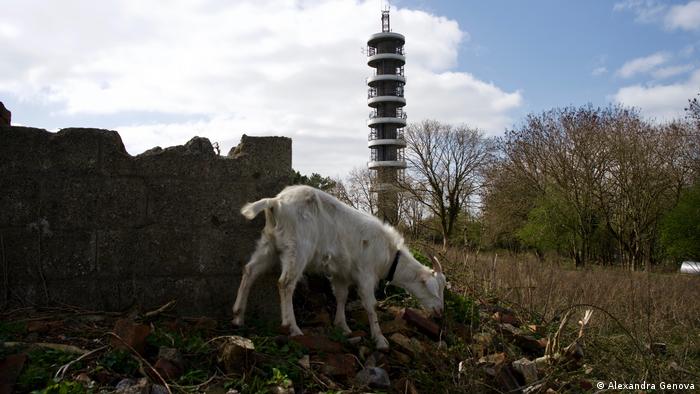 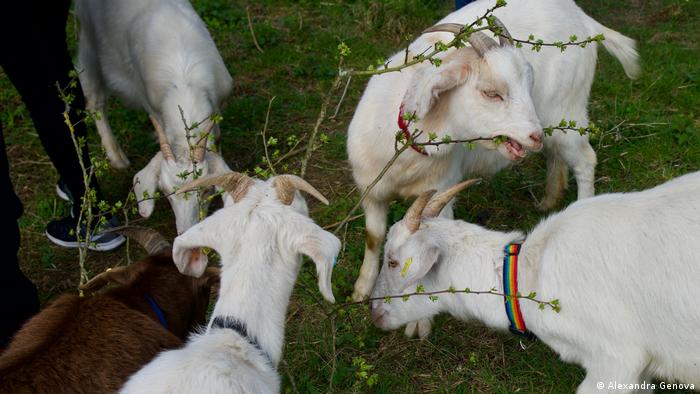 Goats tucking in to an urban snack

Laslett is, as she puts it, "always on the scrounge for land" around Bristol for temporary grazing, and has just established Street Goat's newest dairy at Bridge Farm, an eco-community housed in an 18th century farm that now sits in the shadow of the roaring M32 motorway.

"Street Goat is a great example of how different community and conservation projects can work together," says Matt Cracknell, a project manager at AWT.

Some members join Street Goat with years of farming experience behind them, some with none at all. And the project evolves organically with them, as new people bring ideas and skills that shape and shift what the collective is about.

"Some of the founding members came from a squatting background and the core aim was to make use of wasteland while providing food products and being independent of big commercial systems," Laslett explains. "But as time has gone on, it's what it does for the community that seems to be ever-more important — especially since COVID."

When Street Goat put a call out for volunteer herders last year, 30 people responded, up from six the previous year. And there has been interest from other cities around the UK.

"We've had messages from people in Stroud and Glasgow and elsewhere wanting to mimic Street Goat," says Phoebe Hunter-Mcilveen, a milking member who also runs her own organic cotton business. "It just makes sense! More and more, people are thinking, 'If I consume these dairy products, I want to be part of the production and understand where it comes from.' That's what it's all about."

Correction 28/04/2021: An earlier version of this article mistakenly referenced the M25 instead of the M32.