The director of the CIA says Donald Trump should tweet less and focus on his new job more. Later on the same TV program, the incoming US vice president sought to reassure Americans concerned by Trump's ties to Russia. 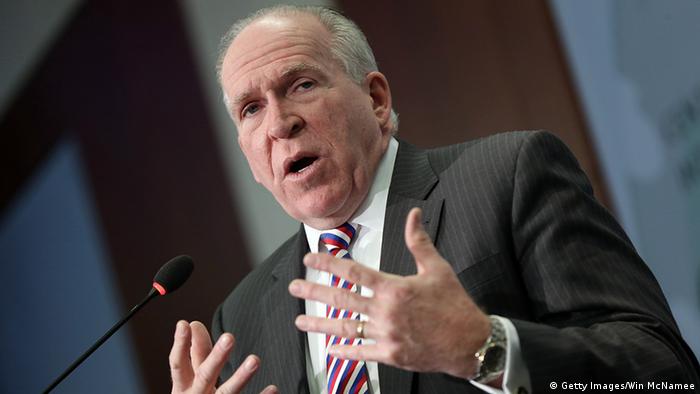 CIA Director John Brennan told "Fox News Sunday" that the national security questions Donald Trump will face could pose a challenge to a man who successfully placed personality over policy in his 2016 election campaign. Brennan said the president-elect would need to understand that "he's going to have an opportunity to do something for our national security as opposed to talking and tweeting."

"Spontaneity is not something that protects national security interests, and so therefore, when he speaks or when he reacts, just make sure he understands that the implications and impact on the United States could be profound," Brennan told the weekly talk show as he ends his run at the Central Intelligence Agency.

Trump has accused intelligence officials of leaking an unsubstantiated report alleging that Russian spies recorded him at a deeply compromising moment. For their part, Russian officials have denied compiling any information on the president-elect's private affairs. Last week, Trump took to Twitter, of course, to lash out at intelligence agencies, accusing them of operating like Nazi spies.

"What I do find outrageous is equating the intelligence community with Nazi Germany," Brennan said on Sunday. "I do take great umbrage at that."

Trump hopes to replace Brennan with Mike Pompeo, a congressman from Kansas and fellow Republican who has called for the death of the whistleblower Edward Snowden.

On the same episode of "Fox News Sunday," Trump's incoming vice president faced questions about whether the campaign had had contact with Russian officials during last year's bitter campaign against the Democrat Hillary Clinton. "Of course not," Mike Pence replied, implying that questions of that sort played into efforts to cast doubts on an already deeply unpopular president ahead of Friday's inauguration.

Intelligence agencies allege that Russia attempted to interfere in the US election by hacking and other means. For months, Trump had publicly doubted statements by US intelligence agencies that Russia had conducted cyberattacks on Democratic political groups, but he changed his tune last Wednesday, saying he now thinks that the Kremlin had a hand in the hacking. The agencies did not speculate as to whether Russia had won the election for Trump, who lost the nationwide tally by a margin of nearly 3 million votes but will assume the presidency owing to winning the vote in the Electoral College, an institution set up in the 18th century that many consider outdated.

Pence denied that the anti-Islam advocate Michael Flynn, Trump's likely national security adviser, had spoken with Russian officials about sanctions imposed by the US as retribution for the Kremlin's alleged hacking during the election. The future vice president said he talked to Flynn on Saturday and learned that the retired general had spoken with Russia's ambassador about issues that "were not in any way related" to sanctions. Flynn reportedly spoke with Russian officials by telephone at least five times on the day the retaliatory measures were announced.