Meryl Streep's anti-Trump speech at the Golden Globes didn't stay uncommented by the president-elect. The fact that he simply needs to react to any criticism has sparked a series of reactions from other fellow stars. 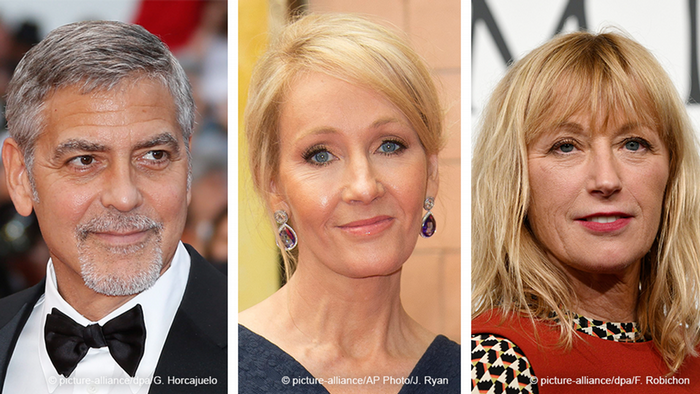 At the Golden Globes ceremony on Sunday evening, Meryl Streep criticized Donald Trump and his infamous campaign speech, during which he did a derogatory impression of disabled reporter Serge Kovaleski. "When the powerful use their position to bully others, we all lose," she said.

Her denunciation of his behavior didn't go uncommented by the President-elect.Trump denied mocking the man and reacted to Streep's speech on Twitter, writing that the actress was "overrated" and a "flunky" of Hillary Clinton's:

"Aren't you supposed to be running the country?" said actor George Clooney, as reported "The Guardian."

Clooney added at a London reception that, although he didn't support Trump during the presidential contest, he hoped "that he can do a decent job, because when the president of the United States fails, really terrible things happen."

Late-night show hosts in the US and their guests also backed Streep's stance against Trump.

"Mr. Trump, you can refuse to release your taxes, you can call to ban an entire religion, you can play footsie with a dictator, but calling Meryl Streep overrated? No, No! Too far!" Stephen Colbert ironically said on "The Late Show" on Monday.

An amused Ben Affleck mocked Donald Trump on Jimmy Kimmel's show: "If there's one thing truly in the world that we know is not true, it's that Meryl Streep is overrated. It's like [saying] Gandhi: terrible leader!," he quipped.

As long as he tweets about artists…

The author Aaron Gillies suggested on Twitter that all stars should keep Trump "peacefully" busy by criticizing him throughout his upcoming term:

Harry Potter author J. K. Rowling added an extra push to the idea by retweeting him:

Trump is largely unpopular among musicians and actors. His team has been struggling to find high-profile singers willing to perform for his presidential inauguration. Among the major artists to have publicly declined are Elton John, Andrea Bocelli, Ice T, Celine Dion and Kiss.

Even the vegan animal-rights activist, singer and DJ Moby was asked to perform, too. He expressed his surprise on Instagram: "Hahahahaha, I was just asked by a booking agent if I would consider djing at one of the inaugural balls for #trump... Hahahahaha, wait, Hahahaha, really?," he wrote, adding that he might consider the gig if Trump released his tax returns.

A group of artists and art critics are calling for an art strike on January 20, the day of Trump's presidential inauguration.

The strike aims "to be one tactic among others to combat the normalization of Trumpism - a toxic mix of white supremacy, misogyny, xenophobia, militarism, and oligarchic rule," says the call signed by over 130 artists and cultural institutions. Among them are the photography artist Cindy Sherman, sculptor Richard Serra, photographer Louise Lawler and performance artist Joan Jonas.

It is still unclear if major cultural institutions and art schools will follow the call. According to the "New York Times," the Museum of Modern Art in New York as well as the Los Angeles County Museum of Art plan to open their doors as usual on January 20. Many universities and art schools are still closed on that day because of winter break.

Trump secretly eased sanctions against Israeli billionaire on way out 26.01.2021

Mining magnate Dan Gertler was sanctioned in 2017 for corrupt deals with the Democratic Republic of Congo. Rights groups are calling on the Biden administration to reinstate full sanctions.