Xi Jinping raised a glass to his signature foreign policy project at a Belt and Road conference in Beijing. While some countries fear that China is using the initiative for strategic gain, others are flocking to join it. 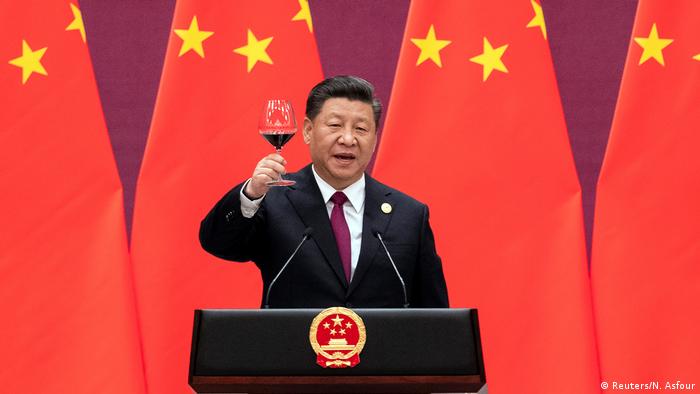 Chinese President Xi Jinping said on Saturday that $64 billion (€57 billion) in infrastructure deals were signed at this week's Belt and Road Forum in Beijing.

Xi, who did not elaborate on the agreements in his closing remarks, said the Belt and Road Initiative (BRI) would "enjoy higher quality and brighter prospects" as "more and more friends and partners" joined the China-led project.

BRI projects to build roads, bridges, pipelines and ports would focus on "open, clean and green development" and be based on market principles, he added.

China has been trying to reinvigorate BRI after a slump in the number of new projects last year. The initiative, also known as the New Silk Road, aims to boost trade between China and the rest of Asia, Africa, Europe and South America.

The total value of all BRI projects worldwide currently stands at $3.67 trillion, according to data from Refinitiv, a financial markets data provider.

The United States and some of its allies have warned that BRI increases China's global influence over low-income countries by offering them construction project loans they cannot repay. Sri Lanka handed over Hambantota port to China on a 99-year lease in 2017 after it failed to repay its debts.

The controversy has failed to stop new countries from joining the initiative. China said the number of countries that pledged to support BRI has increased from 65 to 115.

Italy shocked its European Union partners in March when it became the first member of the Group of Seven (G7), a group of rich countries, to sign on to the initiative. Switzerland has also showed interest in joining.

"I have noted on many occasions that while the BRI was launched by China, its opportunities and outcomes are shared by the world," he said.