China: Xi visits Tibet for the first time as president

The Chinese president visited the city that served as the Dalai Lama's home before the spiritual leader was sent into exile in 1959. 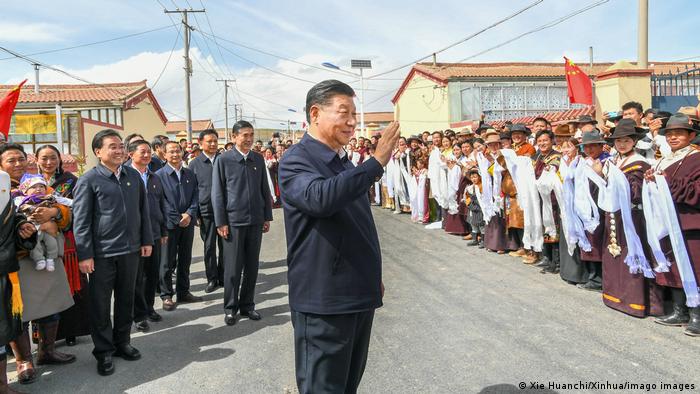 This was Xi's first recorded visit to the country since 2011 and the first as leader of the country.

Xi visited Tibet just twice before. Once in 2011, when he served as China's vice-president. Before that, in 1998, when he was Fujian province's party chief.

What did Xi do there?

Xi flew into the city of Nyingchi on Wednesday. Footage released by local media showed Xi being greeted by a crowd waving Chinese flags as he left the plane. The Chinese leader received a "warm welcome" in Tibet by "masses of all ethnic groups," according to the Chinese media.

He was also accompanied by the vice chairman of China's Central Military Commission and a senior general in the People's Liberation Army, according to news agency Reuters.

The most notable stop on the president's itinerary was Lhasa, the Tibetan city that was once home of the Dalai Lama.

Xi visited the public square in front of the Potala Palace, the traditional seat of the Dalai Lama's power. Tibet's religious leader has been living in exile since 1959 following a failed uprising against the Chinese rule. While in Lhasa, Xi visited a monastery and "inspected ethnic religion" and Tibetan cultural heritage protection, according to Xinhua.

The Chinese leader also reportedly inspected various development projects in the area, including an unfinished railway set to link the mountainous border region with the Chinese southwestern province of Sichuan.

China has poured investment into Tibet in a bid to win hearts and minds of the locals, many of whom resent the influx of Chinese settlers and foreign tourists. The funding has made Tibet one of China's fastest-growing regions economically.

Why is his visit a big deal?

China has held claims on the Himalayan region for centuries and sent the army in 1950 to reinforce its territorial sovereignty over Tibet.

Some areas then became the Tibetan Autonomous Region and others were incorporated into China. Although the Dalai Lama has stayed in exile since 1959 and is currently based in India, Beijing still considers him a dangerous separatist leader.

In 2008, the decades-old issue burst into the spotlight after anti-government protests became violent in Tibet. Tibetans gathered support from the international community as Beijing was the host city of the Olympics that year.

Tibet, on China's border with India, is also seen as having strategic importance for Beijing. Last year, Chinese and Indian troops saw one of the most tense standoffs in decades along their disputed border, with soldiers killed on both sides.

US calls out human rights abuses in China

While talking to Beijing, top US diplomat Antony Blinken pressed for accountability on human rights abuses in Xinjiang, Tibet and Hong Kong.