Beijing had threatened to retaliate after Britain extended residency rights for millions of Hong Kongers eligible for the British National Overseas passport. 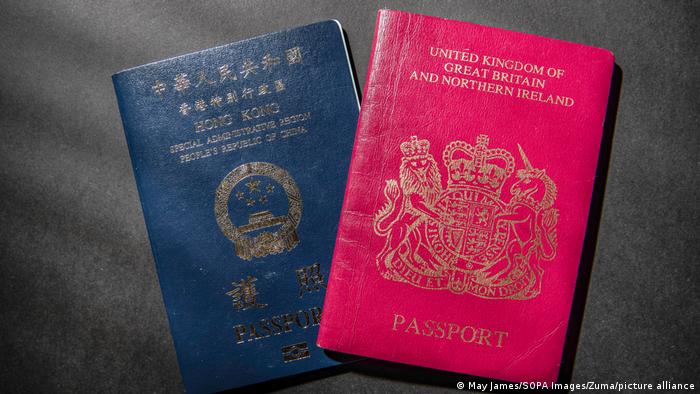 China said Friday that it would not recognize the British National Overseas (BNO) passport as a valid travel document or for proof of identity as of January 31.

The announcement came as Britain prepares to open its doors to millions of residents from Hong Kong following China's security crackdown in the former colony.

"From January 31, China will no longer recognize the so-called BNO passport as a travel document and ID document, and reserves the right to take further actions," Foreign Ministry spokesman Zhao Lijian told reporters.

Beijing's decision to impose a national security law in June prompted the UK government to last year offer refuge to Hong Kongers eligible for the BNO passport from January 31.

How do Hong Kongers get UK citizenship?

Under the policy, those with BNO status who want to leave the territory can apply from Sunday to live and work in the UK for up to five years, and eventually seek citizenship.

"I am immensely proud that we have brought in this new route for Hong Kong BNOs to live, work and make their home in our country,'' British Prime Minister Boris Johnson said in a statement.

"In doing so we have honored our profound ties of history and friendship with the people of Hong Kong, and we have stood up for freedom and autonomy — values both the UK and Hong Kong hold dear.''

Why are Hong Kong residents going to the UK?

Under previous rules — in place as Britain handed its colony Hong Kong over to Chinese rule in 1997 — BNO passport holders could only visit the UK for six months and had no right to work or settle there. But China's crackdown on political life in the territory led to growing pressure for BNO privileges to be expanded.

The passport issue has angered China, which accuses Britain of meddling in its internal affairs.

"The UK is trying to turn large numbers of Hong Kong residents into second-class UK citizens ... and has already completely changed the nature of the BNO," Zhao said.

China had already warned last year that it might stop recognizing BNO passports. At the time, officials said it would mean BNO holders would be barred from traveling to the Chinese mainland.

Hong Kong's government said the change meant the BNO passport now "cannot be used for immigration clearance and will not be recognized as any form of proof of identity in Hong Kong."

Beijing's decision not to recognize the travel document is largely symbolic as Hong Kong residents do not need to use their BNO passports to go to the mainland. Someone with a BNO passport in Hong Kong could still use their Hong Kong passport or identity card to travel there.