China has said that even if the US fails to meet its climate change commitments, Beijing will push on. President Donald Trump's new executive order drew swift criticism from around the world. 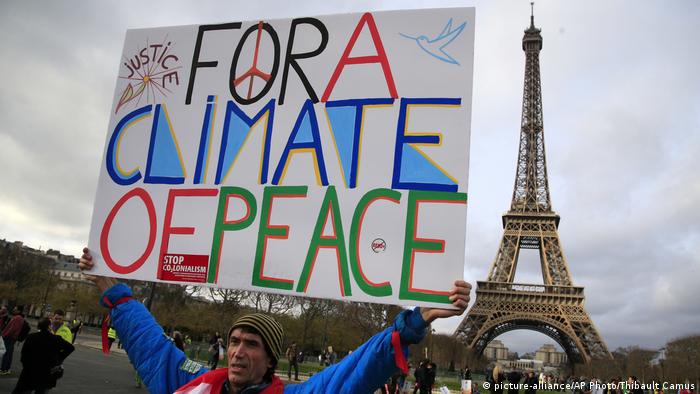 US President Barack Obama has unveiled a landmark decision to tackle climate change. Republicans were quick to criticize it, with some saying it would have "devastating consequences" for the US economy. (03.08.2015)

China will still uphold the Paris climate change accord despite US President Donald Trump's move to overturn regulations aimed at preventing the worst of climate change, the Chinese Foreign Ministry announced on Wednesday.

Trump signed an executive order on Tuesday to end Obama's Clean Power Plan, which required states to slash carbon emissions from power plants and was vital to meeting commitments under the climate change accord reached by nearly 200 countries in Paris.

Chinese Foreign Ministry spokesman Lu Kang said climate change was a common challenge for everyone and the Paris agreement was a landmark deal that arose from the hard work of the international community, including China and the United States.

"We still uphold that all sides should move with the times, grasp the opportunities, fulfill their promises and earnestly take proactive steps to jointly push the enforcement of this agreement," Lu told a daily news briefing.

Trump had called global warming a "hoax" invented by the Chinese during his campaign and said he would kill Obama's climate plans and bring back coal jobs. His executive order rolls back several key climate change initiatives. Germany's Federal Environment Minister Barbara Hendricks sharply criticised the order, saying Trump couldn't stop the world's progression towards climate protection. "Anyone who tries to reverse the race will only harm themselves in the international world."

"The initial decisions from the new US president's administration concerning the battle against global warming constitute a very serious step backwards," Fabius said in a statement.

The Dutch Environment Secretary Sharon Dijksma on Wednesday sharply criticized the abolition of key climate key provisions by Trump saying she was "very concerned" that the US wanted to make itself dependent on fossil fuels.

NGOs gear up for legal battles

Environmental groups said they were prepared to go to court to fight the sweeping executive order but would first try to mobilize public backlash against the moves.

"The president doesn't get to simply rewrite safeguards; they have to ... prove the changes are in line with the law and science," Natural Resources Defense Council director David Goldston said.  "I think that's going to be a high hurdle for them."

“President Trump’s reprehensible move to dismantle US progress in fighting climate change is yet another signal that this administration could not care less about the millions of vulnerable people around the world who live on the front lines of a climate crisis they did not create,” said Oxfam America’s Climate Change Manager, Heather Coleman. "These actions cater to the fossil fuel industry and corporate elites, while leaving the most vulnerable high and dry."

Jeremy Symons, associate vice president at the Environmental Defense Fund, said advocates would work to build support among lawmakers along with the public.

"In terms of the big picture, our strategy is simple: Shine a spotlight on what is going on and mobilize the public against these rollbacks that threaten our children's health" and the climate, he said.

The US Chamber of Commerce welcomed the executive order saying it would create jobs.

"These executive actions are a welcome departure from the previous administration's strategy of making energy more expensive through costly, job-killing regulations that choked our economy," said its President Thomas J. Donohue said.

But energy giant Exxon Mobil asked the Trump administration not to scrap Paris climate commitments, "to ensure a level playing field so that global energy markets remain as free and competitive as possible."

States vow to push on

California, one of the most progressive states on fighting climate change, said it would push on with its commitments regardless.

"Gutting #CPP is a colossal mistake and defies science itself," California Governor Jerry Brown said in a tweet.

"Erasing climate change may take place in Donald Trump's mind, but nowhere else," he added.

Los Angeles Mayor Eric Garcetti joined Brown in saying on Tuesday that Trump would meet with fierce resistance over his new directive.

"No matter what happens in Washington, we will work to meet our Sustainable City Plan goal to reduce greenhouse gas emissions 80 percent by 2050, move toward zero emissions transportation, and pursue our vision of a 100 percent clean energy future," the mayor said.