China lifts ban on US poultry

A market worth over $500 million to US poultry farmers had been closed for five years following an avian flu outbreak. But now China has lifted the ban in order to fill a pork-shaped gap left by swine fever. 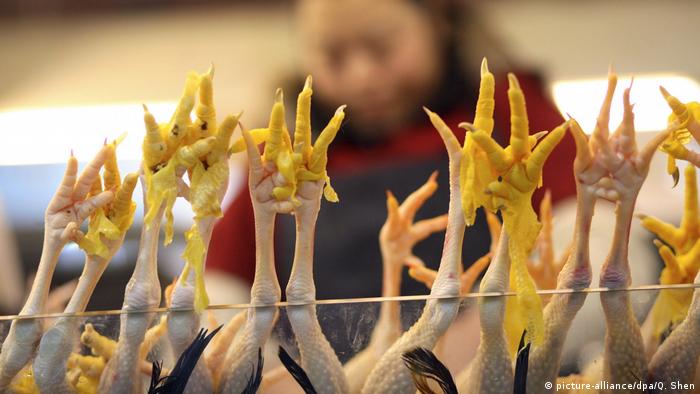 China formally reopened its market to US poultry on Thursday, ending a long-standing import ban.

"After being shut out of the market for years, US poultry producers and exporters welcome the reopening of China's market to their products" said Sonny Purdue, US secretary of agriculture.

"It's critical they be able to sell their bounty to consumers in other parts of the world," he added in a tweet.

China is likely to import all types of chicken, turkey and duck, as well as parts of poultry that are not usually consumed in the US such as chicken feet.

US Trade Representative Robert Lighthizer welcomed the lifting of the "unwarranted" ban.

"China is an important export market for America’s poultry farmers, and we estimate they will now be able to export more than $1 billion (€0.9 billion), worth of poultry and poultry products each year to China," he said.

The US Food Safety and Inspection Service last week lifted its restrictions on the import of poultry slaughtered in China. It is another step in normalizing relations between the two countries as they attempt to resolve a damaging tariff war.

From avian flu to swine fever

The Chinese government banned all US poultry following an outbreak of avian flu in the US in December 2014.

The ban had remained in place ever since, despite the US being cleared from the outbreak in 2017.

Prior to the ban, the US market for poultry imports into China had been worth over $500 million, according to the Office of the United States Trade Representative.

China is struggling to fulfill its population's demand for meat during an ongoing swine fever epidemic that has nearly doubled the price of pork over the past year.

China jails Fentanyl smugglers after joint probe with US

Tensions between the US and China have been running high as a result of the ongoing trade war. Could a rare collaboration to bring down an international opiate smuggling gang be a sign of peace between the two powers? (07.11.2019)