Nearly 9,000 geese to be culled as bird flu spreads in Germany

Authorities in the northern German state of Schleswig-Holstein are planning to kill 8,800 geese on two farms after some were found infected with avian flu. Cases have recently been registered throughout the country. 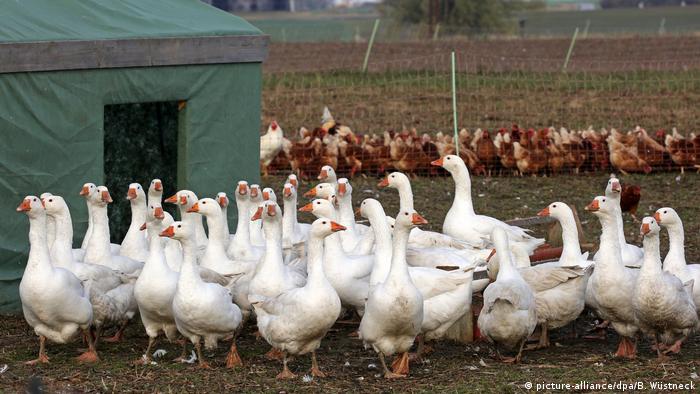 The ministry for agriculture in the northern German state of Schleswig-Holstein has ordered 8,800 geese on two poultry farms to be killed after some of the animals were found to be infected with avian flu.

On its website, the ministry said that so far only a low pathogenic strain of H5 avian influenza virus had been detected at one location holding 1,800 geese. It said analyses were being carried out to determine whether the high pathogenic strain H5N8 was also present.

At the other farm, with 7,000 geese, a laboratory also found the H5 virus subtype and is undertaking further tests to identify the exact strain.

The culling is to begin as early as Tuesday, a local government spokesman said.

Under German law, poultry must be killed even if they have a low pathogenic form of avian flu, as less dangerous H5 or H7 strains can mutate spontaneously into high pathogenic ones.

The ministry said that the high pathogenic H5N8 had also been detected in a seagull in the region. Last week, 30,000 chickens were destroyed in the state after this strain was found in their enclosure.

The H5N8 virus has been found in wild birds in 10 German states since a first case was registered on November 8. Cases have also been reported in several other European countries and Israel.

Although H5N8 is not believed to endanger humans, it is highly contagious among domestic poultry.

Farmers in several German states and elsewhere have  been ordered to keep their poultry flocks inside to prevent them being infected by wild birds.

On Wednesday, German authorites said a number of countries had placed import restrictions on German poultry following the bird flu outbreaks. This comes at a bad time for poultry farmers, who generally expect a rise in sales as Christmas approaches.

The restrictions have been imposed despite the fact that bird flu cannot be transmitted through food.

Essential measures to contain the highly contagious H5N8 strain of bird flu are set to be adopted by the European Commission. The virus has been detected on a Dutch poultry farm and a British duck breeding facility. (17.11.2014)