It once only circulated in Asia - now it's arrived in Europe: the avian flu virus strain H5N8. There's no immediate danger for humans, but experts are advising caution over the new bird flu outbreak. 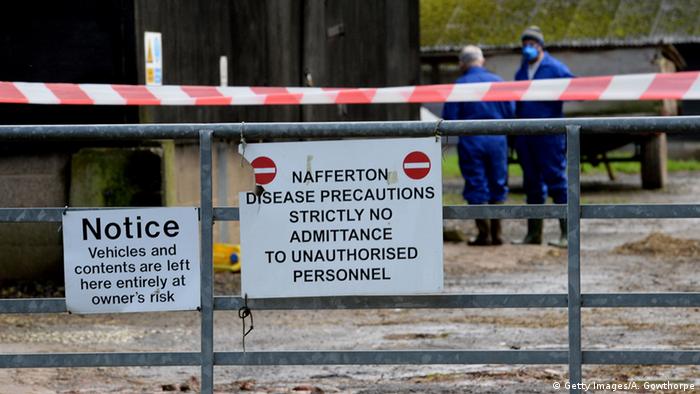 Whenever an influenza virus shows up on a farm, anywhere, people get scared - the fear of a possible flu pandemic is all too real in people's minds.

Dutch authorities said on Sunday they had found the avian flu virus strain H5N8 at a poultry farm in the central Netherlands and set about destroying 150,000 chickens.

Earlier this month, an influenza virus of the same subtype was discovered on a turkey farm in Mecklenburg-Western Pomerania in Germany.

And on Monday (17.11.2014), British officials said they were investigating a case of bird flu in northern England which may be linked to the cases in the Netherlands. An estimated 6,000 ducks on the farm in Yorkshire will be culled.

A threat for birds

"The virus strain found in Germany and the Netherlands is highly pathogenic for birds," Hafez Mohamed Hafez, head of the institute of poultry diseases at Free University of Berlin says.

Professor Hafez says most of the animals infected with this strain will die, and adds that this is not necessarily the case for all H5N8 virus strains - but it is true for the particular case found in Germany and the Netherlands.

In the past, there have been many cases in which H5N8 infected birds remained relatively healthy.

Scientists say the virus seems to have mutated and is now more aggressive.

Hafez says there is good reason for killing the [infected] animals - we have to prevent the virus from spreading from one farm to another. 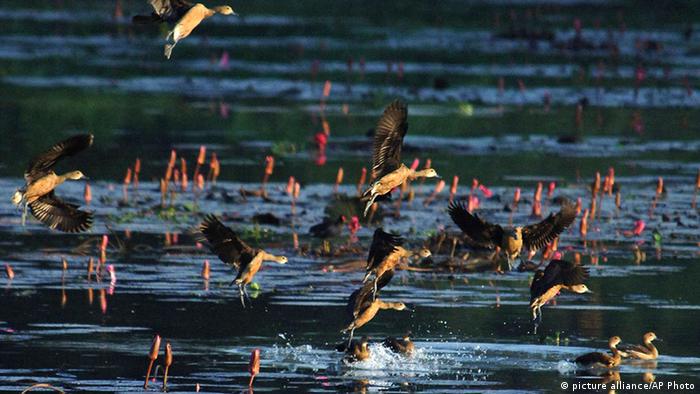 Influenza A is a family of viruses which cause respiratory diseases.

The virus subtypes differ in the kind of proteins the viruses carry on their surfaces. These proteins enable them to enter cells of different hosts.

The strain H1N1 infects humans and also caused the 1918 flu pandemic during which 50 to 100 million people died.

When most people talk about bird flu, they usually mean the virus subtype H5N1. It can cause illness in humans and many animal species. One H5N1 strain is especially adapted to birds.

According to the World Health Organization, 20 people got infected with avian influenza H5N1 in 2013 worldwide. More than half of the cases were in Cambodia. Fifteen people died of the virus.

Another subtype of the influenza A virus, H7N9, circulates among birds but may also infect humans.

H5N8, however, affects only birds.

No danger for humans - yet

Even though they may belong to different subtypes, influenza viruses can be quite similar.

"In principle they can cross species barriers," says Ludwig Hölzle, head of the Institute of Environmental and Animal Hygiene and Veterinary Medicine at University of Hohenheim.

H5N1 is one popular example.

Gundula Jäger, a virologist at the University of Munich says, so far, there have been no documented cases showing humans infected with the virus subtype H5N8.

When avian flu is detected on a farm, measures are taken to kill all the birds

"From what we know of this virus, there is no danger for humans," Jäger says.

Even if the virus were to infect one human - more or less by accident - that wouldn't necessarily mean he or she could automatically pass the virus on to other humans, Jäger says. The virus would have to adapt itself first to be able to enter human cells.

That hasn't happened yet, say scientists.

But what makes the situation with flu viruses so sensitive is that they can change very fast and adapt to new situations, says Hölzle.

And what makes matters worse is that the structure of their genome allows them to interchange genetic material quite easily.

This may happen if one cell is simultaneously infected with two different viruses - H5N8 and H1N1, for example.

Due to such an exchange of genetic material, a previously non-contagious strain may then be able to pass between humans.

"Even if that happens, it is not automatically the end of the world," Hölzle says. "But we need to be careful."

So, better safe than sorry.

Japan has ordered the killing of more than 100,000 chickens after officials confirmed bird flu infections at a poultry farm in the south. It is the first confirmed outbreak in the country since 2011. (13.04.2014)