'China is going to run up against the EU'

President Xi Jinping's visit to Brussels is a sign of intensifying economic relations between the EU and China, believes China expert Fraser Cameron. But Europeans have to keep raising political issues, he told DW. 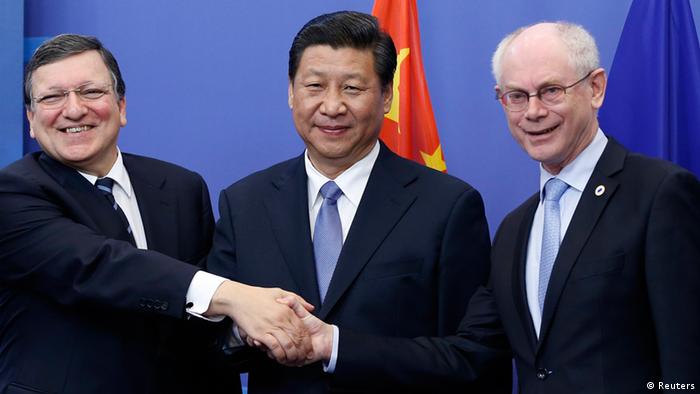 Deutsche Welle: This is the first visit of a Chinese president to the EU institutions. In your eyes, what significance does it have?

Fraser Cameron: I think it's very significant that the Chinese president comes to Europe because this will give him a first-hand impression - not only of EU institutions and leaders. He has also been able to arrange a number of visits to member states, including Germany, France, the Netherlands, and Belgium. This will also give him an idea of the interplay between member states and European institutions.

The focus of this visit to the EU and its member states is, as always, on economic relations. Will the talks go significantly beyond that?

Human rights are often mentioned because that's expected. But I get the impression that the Chinese side listens, they know it's coming, they nod. That's it.

But that's followed up at a lower level with consultations on human rights, both at the EU level and the level of member states. Germany for example has been having a particularly intense dialogue on human rights with China. I think gradually, it's making some impact. And it's important to remind the Chinese that the EU attaches importance to human rights.

But what can be done apart from telling them they have to improve their human rights record? What is being done to promote that in concrete terms? 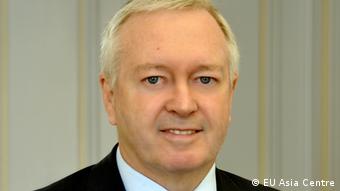 Fraser Cameron is the Director of the Brussels-based think tank EU-Asia Centre.

Many things. Business schools have been set up with EU support, which involve facing issues head-on, like corruption, the rule of law, media freedom. These are all important for human rights as well. Preaching is not really going to get anywhere. Yet, it's important to try and do everything possible to make sure that liberal reforms go on, because the economic and the political side are so interrelated.

In what other fields do you see potential for closer relations?

Urbanization is already doing quite well; innovation will be a key issue. There's a lot of EU expertise available to help China move towards a green economy. There was a lot of talk on Africa. As China expands its global footprint, it's going to run up against the EU more and more. So it's important that the two sides talk and share views on issues like Sudan, and development in Africa.

Do you have the impression that China takes the EU as a joint political bloc seriously, or is it more interested in bilateral relations with the member states?

Both. But like any major power, including Russia and the United States, it's seeking opportunities to divide and conquer. It's quite natural, and of course it's up to the EU to provide a united front in response. So while I think there's some obvious competition within the EU for trade and investment, I think they do recognize the importance of speaking with one voice against countries like China and Russia.

Would you say there's been a visible change in China's foreign policy - especially toward the EU - since the new government took office?

I think there's recognition that the EU is their number-one trading partner, that the EU is going to overcome its difficulties it had regarding sovereign debt, that growth prospects are good, that this is going to be a really important area for the Chinese - moving forward both in terms of helping them with their own economic development, but also as a political partner.

Would you say that's happening because President Xi Jinping is taking a different approach, or would it also have happened under his predecessor Hu Jintao? 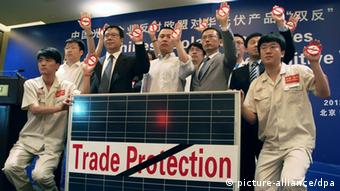 In one trade conflict, Chinese producers protested an import duty the EU imposed on solar cells

His predecessor didn't take such a hands-on approach as President Xi. But the relationship previously had been put onto a higher level through [former] Prime Minister Wen Jiabao. I think the team now of President Xi and Premier Li both have an interest in Europe, for a mixture of economic and political reasons. But above all, it's important as the largest market in the world. And China needs that market to ensure continued high employment at home.

So you would say that the focus will remain on the economic aspect of the relationship?

This will be the prime driver of the relationship for the foreseeable future. I think it's important to understand that the investment agreement currently being negotiated will have a very important role in opening up the Chinese market, tackling issues like protection of intellectual property and market access. This will then be the precursor to a potential free-trade area negotiation between the EU and China.

What are the Chinese most worried about when they look at the EU and developments here?

I think they were worried before whether the EU would continue to exist - this was the discourse in 2009 and 2010. They now understand the EU is here to stay, and that it's a very stable environment. They want to increase their investment in Europe. And they also understand the importance and growing role the EU plays in international affairs.

Speaking of international affairs: In the United Nations Security Council, China abstained from condemning Russia's moves to annex Crimea. Many people have interpreted this as China isolating Russia, or moving away from Russia. Would you see it the same way?

No. They are playing both sides. They don't want to upset the Russians, but they have an equally great fear of anything that upsets their core principles of territorial integrity and sovereignty. Of course they have great concerns about demands for a referendum - which might take place in Tibet, Taiwan, or Xinjiang Province. So they're being very careful here trying to not antagonize either side, nor to come down 100 percent in favor of one or the other side.

Fraser Cameron is director of the Brussels-based think tank EU-Asia Centre. He has lived and worked in Belgium for 20 years. A former British diplomat and EU official, he is also a visiting professor at several universities in Asia.