Experts say an unusual resolution passed by the Communist Party will strengthen the president's power and rewrite party history. The move, they say, offers Xi a status similar to that of Mao Zedong. 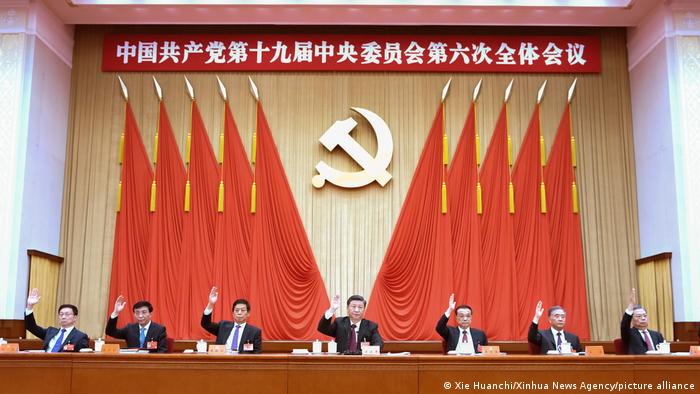 Party officials described Xi as "the helmsman" of Chinese policy

The Chinese Communist Party (CCP) on Thursday approved a resolution that is set to consolidate President Xi Jinping's authority and cement his status as one of the most important leaders in Chinese history .

The resolution can also pave the way to a likely third presidential term next year.

Experts believe that the resolution indicates a turning point for the CCP, giving Xi greater control over the narrative of its history.

It also puts Xi on a pedestal similar to CCP heroes like Mao Zedong and Deng Xiaoping, the only other two leaders who have convened a resolution on the party's history.

On Friday, the CCP held a press conference to further elaborate on the details of the resolution, following four days of closed-door talks.

'The helmsman' of rejuvenation

Party officials described Xi as "the helmsman" of Chinese rejuvenation and emphasized that the third resolution puts more emphasis on achievements and historical experiences.

The press conference, however, didn't mention Xi's predecessors, and instead focused on what it deemed significant achievements of "socialism with Chinese characteristics" under his leadership.

Jiang also responded to a question about democracy, claiming that the CCP was pursuing a "whole-process people's democracy," a term that Xi first used in 2019.

Jiang argued that the democracy that Western countries boast of is "a democracy of the rich, not a true democracy."

Chang Wu-Ueh, a professor at Tamkang University's Graduate Institute of China Studies, told DW that, unlike the first two historical resolutions, which focused on handling internal disputes, this third resolution focuses exclusively on outlining the goals and achievements of the CCP.

"China has passed the stage of learning from foreign countries. It believes that it has successfully developed a unique development model that compares favorably with the West," Chang said.

"Now the top Chinese officials really believe they are successful," he added.

A resolution to strengthen leadership

Some experts see the resolution as a means to strengthen Xi's leadership.

"It emphasizes that, for the next century, 'Xi is indispensable,'" Chang said.

"It will also reinforce the legitimacy, propriety and necessity of Xi Jinping's long-term rule during next year's party congress and in the foreseeable future," he added.

Hsin-Hsien Wang, a professor at the Graduate Institute of East Asian Studies at Taiwan's National Chengchi University, told DW that Xi was also focused on "establishing a 'correct perspective' on party history," referring to his promotion of the concept of "Xi Jinping Thought on Socialism with Chinese Characteristics for a New Era."

"The resolution will put Xi at the same level as Mao Zedong and Deng Xiaoping," Wang said.

Policies to 'ruthlessly silence' other narratives

Anne-Marie Brady, an expert on Chinese politics at the University of Canterbury in New Zealand, said there was opposition in China, both within the CCP and without, to Xi's placing himself on the pantheon of CCP leadership and putting himself in power indefinitely.

"Xi's repressive policies over the last 10 years have ruthlessly silenced any voicing of alternative perspectives," she said.

Apart from emphasizing Xi's core position in the party, CCP officials also mentioned the term "socialism with Chinese characteristics" on several occasions during the press conference.

Wang said the CCP wanted to show that China has developed a "socialist path with Chinese characteristics" to prove the superiority of its system.

"I think Xi has the intention that the CCP will be the true successor of Marxism's socialist practice over the past two to three centuries," he said.

Party officials also elaborated on Xi's new political mantra of "common prosperity," and stressed that the party needs to keep narrowing the gap between urban and rural areas while "common prosperity" will be a long-term goal that can promote a fair income system.

Chang believes that Xi and the CCP will tackle wealth distribution as their next issue, after establishing that they have built a "moderately prosperous society."

The CCP understands that, after solving poverty, equal distribution must become the priority, Chang said.

Wang predicts that the concept of common prosperity, which Xi has been discussing for the past two years, will become one of the main focuses of the 2022 party congress.

After he talked about the concept again in August, officials implemented several new regulations, Wang said.

Controlling the narrative of history

Joseph Torigian, an assistant professor at American University, said the third resolution gave Xi "his own historical resolution and claim to history."

"It's evidence of classic Xi Jinping: a belief that only a 'core' leader can stabilize the regime, an obsession with history and his place in it, a preoccupation with the importance of ideals and faith in the party's mission, but cautious and flexible in practice," Torigian tweeted.

Brady, meanwhile, emphasized that the CCP's legitimacy to rule China and the justification for its policies are embedded in their official narrative of history.

"Xi Jinping, like other CCP leaders before him, fears the erosion and undermining of the official CCP narrative of China's modern history," she said.

"There was a brief tolerance to a more diverse perspective on party history after 1992," Brady said, "but, from 2002, Hu Jintao reprioritized the political importance of maintaining CCP control over the official narrative, and Xi has continued to do that."