A Chinese company is the leader in patent applications in Europe. And for the first time, China has received more patent filings than the USA, EU, Japan and South Korea combined. What does this all mean? 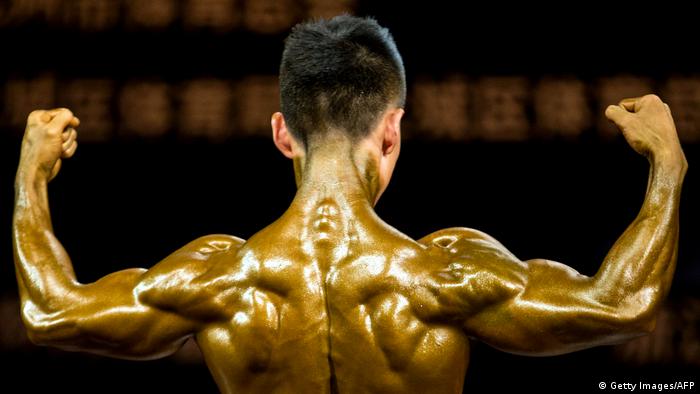 China is catching up in technological innovations. The country did well in the European Patent Office's ranking on Wednesday, with Huawei filing more patents in Europe than any other company, and the country as a whole advancing to fifth place for the first time.

When it comes to total patent applications, China has been the world's number one since 2011, since most patents are filed within the country. Given the country's enormous size and population, that might not be that surprising.

But China recently broke another record: For the first time, it received more patent applications than the USA, the EU, Japan and South Korea combined, according to a report by the World Intellectual Property Organisation (WIPO), a body of the United Nations based in Geneva. WIPO's latest report is based on data from 2016. 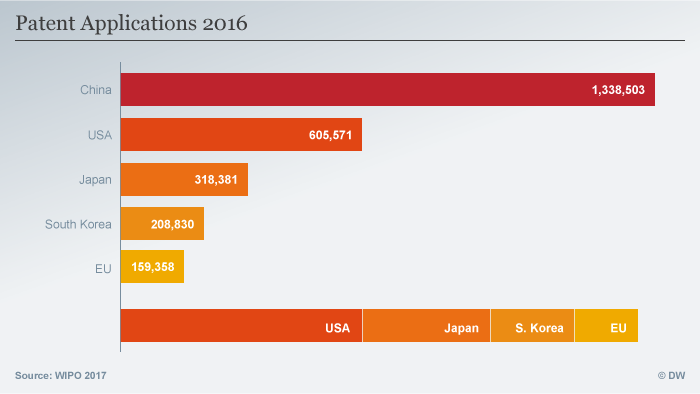 "Of course, not every filed patent is granted, and not every granted patent will be used commercially," Carsten Fink, WIPO's chief economist, told DW. "And some patents are worth more than others. So you have to be careful when looking at these numbers."

Still, for Fink, the numbers carry a clear message. "They show China's growing strength in innovation," Fink says. "This trend can also be seen when looking at research and development spending, publications in scientific journals, or investment in human capital," he adds.

This development is in line with the Chinese government's stated goal of transforming the country's economy from the world's workbench into a technological leader with a stronger focus on its huge domestic market.

Most patents in China are filed by digital communication companies. "Firms like Huawei and ZTE are the leading patent filers in China," Fink says.

Internationally, the field of digital communication is also among the strongest areas for patent applications, ahead of medical technology and pharmaceuticals. More patents are only filed in computer technology, electrical machinery, and measurement technology.

Because of China's sheer size, any statistics with absolute numbers tends to give a distorted picture. That's why other rankings put the patent filings in relation to a county's economic power or population. Here, China is not quite as dominant, but still catching up quickly.

China comes in second, after South Korea, for patent filings per $100 billion of gross domestic product (GDP). With patent filings per million inhabitants, the country ranks sixth, with similar results as Germany, the USA, or Switzerland. 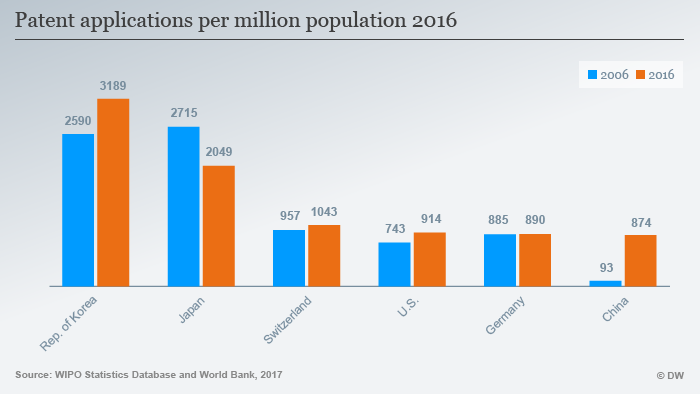 Guy Standing, an economist at SOAS University of London, sees China's growing strength in patents as one reason for the current protectionist tendencies of US President Donald Trump.

In the past, the US has been the driving force to protect intellectual property rights in international trade — by pushing for the Agreement for Trade-Related Aspects of Intellectual Property Rights (TRIPS) in the framework of the World Trade Organization (WTO), and also by including similar passages in free trade agreements.

All this resulted in a system that served the interests of the US economy well for a long time. But it also gives immense power to holders of patents and capital, according to Standing. The leading US tech firms are an example: Facebook, Amazon, Alphabet (Google), Apple, and Microsoft.

"The Top 5 have become superstar-firms," Standing told DW. "In the last 10 years, they have bought up a total of 519 other firms." By doing so, they have not only eliminated competitors, he says, but also acquired a lot of patents, "benefiting enormously from the intellectual property system" that has developed with the passage of TRIPS.

"This has globalized the American patent system, the copyright system and the industrial design system and entrenched the ability of these mega-corporations to earn monopolistic rents," Standing argues.

Who is the King of the Jungle?

But while the biggest tech companies are doing fine, the US economy as a whole has been falling behind. "The irony is that under Trump, the United States is lashing out at China. This reflects the fact that the United States no longer is the dominant extractor of rents," Standing claims.

"Suddenly China is more than an equal competitor and this is I think explains part of the rhetoric and actions of the United States because they are no longer king of the jungle."

We are now witnessing "a fascinating phase of the global transformation," Standing argues. He believes that Trump is desperately trying to claw back some of the advantages, if need be with protectionist measures, to stop China from rising further.

In Standing's view, Trump's chances of success are close to zero. "China is just too big and too dynamic and it's too strategically well placed in the global economy that the United States won't succeed."

The top US trade negotiator has described China's industrial policies as a "very serious problem." US President Donald Trump has accused China of cheating the US economy out of "hundreds of billions of dollars." (19.08.2017)