Zhang Zhan traveled to Wuhan in February last year to report on the chaos at the epicenter of the first coronavirus outbreak. She is on hunger strike after receiving a 4-year jail sentence for "provoking trouble." 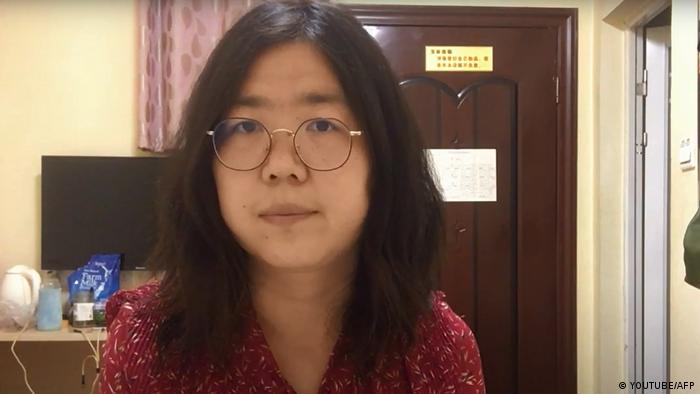 Chinese citizen journalist Zhang Zhan, who was jailed for 4-years over her coverage of the COVID-19 pandemic in Wuhan, is at imminent risk of dying, the International Federation of Human Rights said Friday.

Citing a relative, the IFHR said Zhang — who has been on partial hunger strike since June last year — currently weighs less than 40 kilos (88 pounds), is unable to walk unassisted and cannot raise her head without assistance.

At times, the former lawyer has been force-fed through tubes due to severe malnutrition, according to IFHR, which said it had been updated by the Network of Chinese Human Rights Defenders (CHRD) group.

AFP news agency cited a tweet from her brother Zhang Ju that she "may not live for much longer."

"In her heart, it seems there is only God and her beliefs, with no care for anything else," he added.

Someone close to Zhang, who declined to be named, told AFP the family had asked to meet her more than three weeks ago at the Shanghai women's prison but had not received a response.

IFHR said it was "deeply concerned" about Zhang's condition and urged "the Chinese authorities to immediately and unconditionally release her and grant her immediate access to adequate and comprehensive medical treatment."

Amnesty International campaigner Gwen Lee said in a statement that Zhang's detention was a "shameful attack on human rights."

Why Zhang Zhan was jailed

Zhang traveled to Wuhan in February 2020, the epicenter of the original COVID-19 outbreak in China, to report on the chaos unfolding.

She went missing a day after releasing a video that criticized measures imposed by the government to stop the spread of the coronavirus. She claimed that Chinese authorities were being negligent.

Zhang was detained in May and held in pre-trial detention until December.

She was found guilty of "picking quarrels and provoking trouble" and handed a 4-year jail term.

The charge is routinely used by Chinese authorities to suppress dissent.

In July, she was moved to a hospital for two weeks due to her deteriorating health.

China has reveled in its success in keeping domestic infections down to a trickle of sporadic outbreaks.

The government has put forward a narrative crediting the Communist Party with returning life almost to normal even as death tolls and infections continue to explode in the rest of the world.

But those who threaten the official version by raising questions about the government's early cover-up and handling of the Wuhan outbreak face the party's wrath.

Zhang is among a group of four citizen journalists detained after reporting from Wuhan.

With material from AFP news agency

The Chinese reporter was jailed on Monday after her coverage of the government's handling of the coronavirus pandemic. Her imprisonment comes as the EU is set to ink a major investment deal with Beijing.