Around 250 unaccompanied minors are camped out in freezing temperatures on the northern coast of France. Living on the streets without proper access to food, they have reportedly endured regular attacks by police. 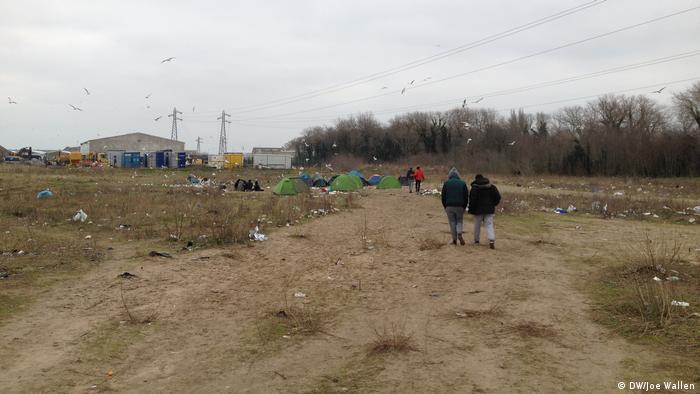 "Come," beckons Siddique*, a jovial 14-year-old Afghan boy wearing a puffer jacket so large it appears to be swallowing him whole. "Come and drink with 'the Bambinos!'" The teenager grabs my arm and drags me to a gathering where four of his young countrymen sit sipping mugs of steaming black tea.

This seemingly innocuous encounter does not, however, take place in a Kabul side street but in a small woodland clearing just a stone's throw from the Central Hospital in Calais, northern France.

This winter the coastal city has a seen a spike in the number of migrants trying to cross the English Channel by boat in order to reach the United Kingdom. France recorded only 12 attempts in 2017, while this figure rose to 71 in 2018, with 539 people being plucked from fragile inflatable dinghies whilst aiming to traverse the world's busiest shipping lane. Eighty percent of the attempts took place in November and December alone.

Siddique says he is originally from Afghanistan's Nangarhar Province and fled his home at the age of 12, when the Taliban murdered his father and brother. After a "completely terrifying" journey across Iran, Turkey, the Balkans and Germany, Siddique has established himself as the leader of a "Lord of the Flies" group of five unaccompanied Afghani minors — which he affectionately calls "the Bambinos."

The United Nations defines an unaccompanied minor as someone under the age of 18 "who has been separated from both parents and other relatives and is not being cared for by an adult."

Siddique and the other boys live in a cluster of tents amidst noxious detritus. Penniless and with no income the children are totally reliant on various aid organizations, headed by Help Refugees. Help Refugees provides the group with tents, blankets, clothing, firewood and three meals a day, all crucial as the temperature hovers around freezing.

The Bambinos existence is far from an anomaly, with Help Refugees documenting at least 250 unaccompanied minors in Calais and Dunkirk alone, out of a wider migrant population of approximately 2,000. The Hauts-de-France regional government is legally obliged to provide emergency housing for unaccompanied minors in Calais, but according to the Refugee Youth Service (RYS), an organization working under the Help Refugees umbrella, facilities are full, and there is a lack of political will to provide more beds.

These precarious day-to-day living conditions are far from the only threat the children face; they are terrified of the French police. And with good reason, according to Help Refugees, which recorded 244 human rights abuses against migrants, including unaccompanied minors, in Calais and Dunkirk in 2018.

Their records detail police subjecting migrants to a "tirade" of physical and psychological abuse. This includes the "almost daily" demolition of migrants' tents and seizure of vital possessions, including bedding, clothing and cooking equipment, violent and seemingly random beating of migrants, attacks by police dogs, spraying of migrants with chemical agents and bleach, and detainment for days on end.

"Minors receive equal levels of discrimination, racial profiling and are subjected to the same rates of police violence as the older communities here in Calais," explains Maddy Allen, field manager for Help Refugees in northern France. "The UN Convention on the Rights of the Child is broken daily, with European governments shirking responsibility for protecting these highly vulnerable children."

Between June and December 2018, refugee aid group Utopia56 and the Refugee Youth Service escorted 53 unaccompanied minors to the emergency room at Calais's Central Hospital or called an ambulance for them. Twenty-eight emergencies were caused by the inhumane conditions in which they live in Calais, including nine suspected cases of tuberculosis. Ten children required immediate medical assistance due to police violence, the groups said.

Like Siddique, Mohammed*, 16, lives with a group of unaccompanied minors, all from Sudan, in the Rue des Garennes settlement. He says he fled his home in Darfur after the Janjaweed, a pro-government militia, torched the neighboring village, murdering its entire male population.

While sleeping in an abandoned building after first arriving in Calais, he was found by the city's police who, he says, proceeded to beat and pepper spray him.

"When minors arrive in Calais, they have already experienced great suffering," says Jeremie Rochas, a former social worker at the RYS. "Almost all of them testify to having been victims of aggression and torture during their migratory journeys, particularly if they travelled through Libya. Then in Calais they face extreme living conditions and a lack of future prospects which leads to despair. Many migrants do alcohol and drugs to cope as a result."

Doctors have diagnosed a high number of unaccompanied minors as suffering from a range of psychological conditions, including PTSD, with some ending up strapped to beds, NGO groups say.

"Their environment leaves children devoid of basic rights such as access to sanitation, health care, freedom from abuse, or dignity," says Hayley Willis, assistant manager for the RYS in northern France. "Their right to protection is further violated as often it is violence from the police — often leading them to require medical intervention — that they are most fearful of. There is an epidemic of vulnerable and traumatized children who are largely kept invisible or criminalized that we must as a society fight to make sure become seen."

*Names have been changed to protect the boys' identities.

Integration at stake for Italy's villages

Violence against refugee children at the EU's external borders is on the rise, says a new report from Save the Children. The organization's Meike Riebau spoke to DW about what minors experience at the bloc's frontiers. (24.12.2018)