Child marriages spike in Philippines violence-marred Marawi city | Asia | An in-depth look at news from across the continent | DW | 12.07.2019

A siege by extremists in the Philippines' Muslim-majority Marawi city displaced over 400,000 people in 2017. People are returning to their homes, but with a sense of insecurity. This is making them take drastic measures. 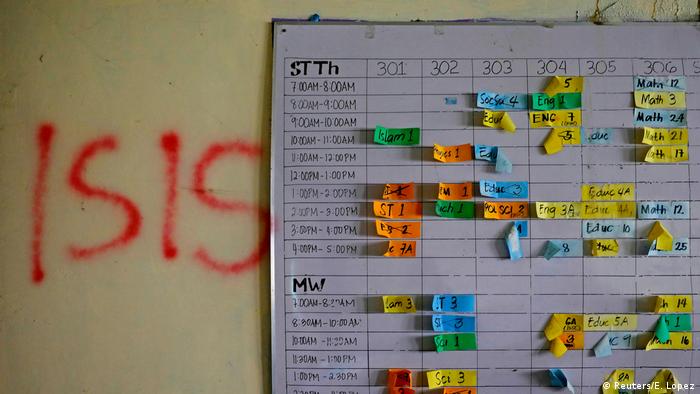 As the Philippine government undertakes the rebuilding process of Marawi city more than two years after it was overrun by Islamic militants, an issue regarding underage marriages in the communities has reared its ugly head.

Khuzy Maranda, a volunteer at the Marawi evacuation camps, told DW that she witnessed several cases of marriages among adolescent couples, especially during the siege.

"Many people in Marawi lost everything during the siege. They lost their homes, their livelihood and security. Therefore, parents started marrying off their young daughters due to economic constraints or because they could no longer take care of them," said Maranda.

The Philippines' security forces officially ended their combat operations in Marawi at the end of 2017. The five-month battle between the army and the "Islamic State"-linked Maute militant group was one of the deadliest in the Southeast Asian country since World War II.

Read more: The Philippines - In the Sights of IS

The violence and chaos in Marawi also posed a challenge to the Muslim tradition of male-female segregation. As people took refuge in gymnasiums, madrassas or classrooms, the segregation of young boys and girls could no longer be exercised. So parents thought it would be better to marry off their children to preserve the "family honor."

According to the Muslim Personal Law in the Philippines, boys who have reached the age of 15 and girls who have had their first menstruation are allowed to tie the knot.

"Child marriage is not a norm in the Southeast Asian country, but the conflict in Marawi crippled the economy and devastated families. The need for survival became more important than anything else," Samira Gutoc, a former legislator and resident of Marawi, told DW.

"Child marriage existed in Bangsamoro [officially the Bangsamoro Autonomous Region in Muslim Mindanao] even before the start of the Marawi conflict, but the Islamist siege exacerbated the problem," Andrew Morris, head of the United Nations Children Fund (UNICEF) Mindanao Field Office, told DW.

Official data on early marriages in Mindanao is scarce, but a 2010 survey with some 600 respondents in the province's predominantly Muslim regions showed that 83% of residents aged between 15 and 17 got married in the areas, whereas 17% were between 9-14 years of age.

More than 400,000 people in Marawi and neighboring areas have been displaced due to the 2017 conflict. Rights groups say that the government's reconstruction and rehabilitation process has been fraught with mismanagement and corruption.

Humanitarian relief agencies estimate that around 66,000 people are still unable to return to their homes. Some are living with host families, while over 20% continue to stay in evacuation centers and temporary shelters.

Around 80% of the Filipino Muslim community are based in southern Philippines. Several areas of the Mindanao region have been the epicenter of skirmishes between government forces and insurgency groups, including the jihadist Abu Sayyaf organization.

Muslim feminist groups say the issue of early marriages in Mindanao should be compared with other conflict-ridden regions, as it is not exclusive to Marawi.

"Many conflict-marred areas in the country have a high percentage of underage marriages," Fatima Allian, program manager for the Nisa Ul-Haqq Fi Bangsamoro (Women for Justice in the Bangsamoro) non-government organization, told DW.

"The post-conflict phase is even more troublesome for the displaced people because although they no longer hear gunshots, they still do not have a sense of security," she added.

Nisa Ul-Haqq, along with other child rights groups, has been working with local Islamic leaders to update the age provisions stipulated in the 1974 Code of Muslim Personal Laws. Some progress was made in 2015 when Muslim clerics issued a fatwa (a religious edict) that Muslim youth should get married "when the necessary conditions are met."

In January, a plebiscite ratified the creation of the Bangsamoro Autonomous Region in Muslim Mindanao, giving the region increased executive, legislative and fiscal powers. The three-year transition period entails a reevaluation of existing laws, which Allian hopes will alter the age limit for marriage.

"We need to talk about these 'tabooed' issues, including child marriage. To end the practice, we need to have a realistic discourse about why it happens and what can be achieved," she added.