Battle for Marawi takes huge toll on public health in Philippines | Asia | An in-depth look at news from across the continent | DW | 10.07.2017

The fighting between government troops and Islamist gunmen for control of Marawi, in southern Philippines, penalizes evacuees by exacting a heavy toll on their mental and physical health. Ana P. Santos reports. 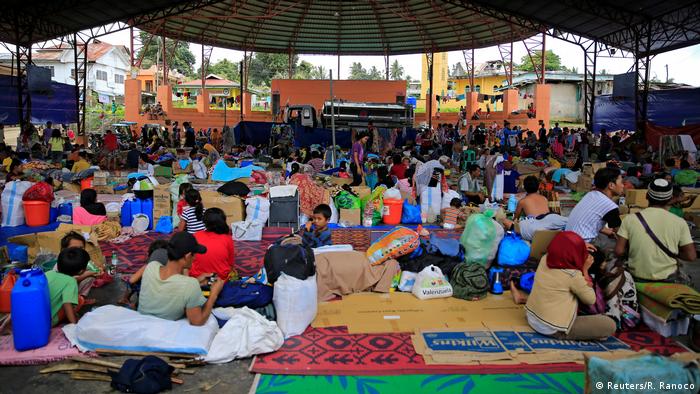 Weeks in cramped evacuation centers are exposing civilians displaced by the fighting between government forces and Islamist militants in the southern city of Marawi to increased health risks.

"What we are seeing is a pattern of disease outbreak," said Dr. Alinader Minalang, a health officer in Lanao del Sur, the province where Marawi is located.

According to local Department of Health (DOH), there have been more than 3,000 reported cases of upper respiratory infection, diarrhea, hypertension and fever in the different health facilities. Thirty-one deaths have been reported, which include infants dying from dehydration.

Health and rescue workers feel this number may have been underreported. "This is only partial data from 80 evacuation centers. We have not included evacuees staying with family," said Samira Gutoc, focal person for the Ranao Rescue Team, an inter-agency group that is monitoring the health condition of evacuees. 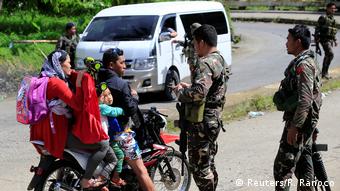 It's estimated that over 350,000 people were displaced when fighting broke out in May between government troops and the Maute terror group

The Ranao Rescue Team is working with the government to look for ways to increase the number of health officials and volunteers to do closer monitoring on the health of the evacuees. The additional manpower will also help in putting together mobile health clinics that do the rounds in different evacuation centers.

"Deaths due to diarrhea and dehydration are preventable. Infant and maternal deaths can also be prevented with prior monitoring and timely health intervention," Gutoc told DW.

The Philippine Department of Social Welfare and Development (DSWD) estimates that more than 350,000 people were displaced when fighting broke out in May between government troops and the Maute terror group, which is aligned with the so-called "Islamic State" (IS) terror outfit.

In a pep talk to soldiers, Duterte jokingly told them they were free to rape up to three women each. The soldiers are enforcing martial law in the southern third of the Philippines in response to Islamist attacks. (28.05.2017)

Rodrigo Duterte is likely to extend the recently declared martial law to areas other than Mindanao following violent clashes between police and the militants linked with "Islamic State." Ana P Santos reports from Manila. (24.05.2017)

Most of the displaced residents have sought refuge in the homes of relatives, but close to 20,000 remain crammed in evacuation centers where limited access to water and poor sanitation are making them prone to health risks.

"The displaced are living in public gymnasiums and classrooms. These are not places equipped to function as evacuation centers or temporary shelters. There are no appropriate sanitation facilities and access to clean water is limited," Zia Alonto Adiong, spokesperson for the Joint Task Force Marawi, told DW.

Without adequate space to cook or store food, the diet of evacuees has been mostly limited to canned food and instant noodles. "We are seeing a chain reaction. The evacuees are not getting the proper nutrition intake so their immune systems are weakened and they are getting sick. Some are dying," added Adiong.

More worrying for officials is the rising number of mental health problems among evacuees. Psychosocial evaluations conducted among evacuees showed low to high levels of stress, fear and phobia. Some are showing early signs of schizophrenia.

"Some evacuees have lost loved ones. Some have loved ones who are still trapped in the war zone. Some report being awakened by memories of bombing and gunfire. Many worry about their loss of livelihood and are afraid that they will have nothing to go back to after the war. The high level of stress and anxiety is really affecting their mental state," explained Minalang.

"Even before the war broke out, there was a lack of mental health specialists. The nearest one was in Cagayan de Oro," said Minalang. Cagayan de Oro is more than 100 kilometers away from Marawi.

Stigma surrounding mental illness is another challenge health authorities face as many families would opt to quietly hide a relative suffering from mental sickness rather than having them diagnosed and treated.

"We are really unprepared to handle a disaster of this magnitude," said Minalang.

The ongoing conflict has been the biggest crisis faced by the tough-talking Philippine President Rodrigo Duterte since he assumed office in July last year.

Duterte declared martial law in the whole of Mindanao shortly after fighting erupted and it became evident that the military was caught unaware by the strength of the Maute and their weapons capability.

"The unprecedented violence in Marawi has caused tens of thousands of families to flee, leaving everything behind. This has triggered a sharp increase in humanitarian needs as many of the displaced people are currently deprived of fundamental means to sustain their day-to-day lives," Pedro-Luis Rojo, head of the East, Southeast Asia and Pacific Regional office for the European Civil Protection and Humanitarian Aid Operations (ECHO), said in a statement.