Chancellor Angela Merkel has visited Sweden ahead of an EU summit later this week in Malta. The focus of the talks was on refugees but Merkel also spoke strongly on finance and trade in response to comments from the US. 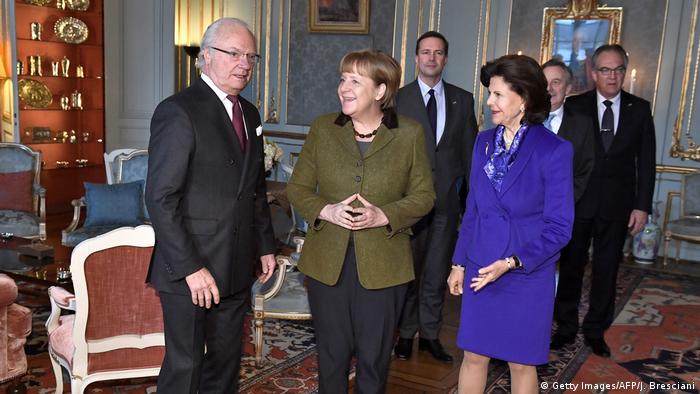 EU leaders want clarification from the Trump administration on what the newly imposed travel ban will mean for dual nationals, asylum seekers and trans-Atlantic ties. They also question its value in fighting terrorism. (30.01.2017)

A German native, Queen Silvia of Sweden regularly visits her home country. This time, she and her husband King Carl XVI Gustaf are meeting Chancellor Merkel and President Gauck - and seeing a refugee project in Berlin. (05.10.2016)

In a new documentary by Swedish broadcaster SVT, Queen Silvia of Sweden has said Drottningholm Palace - the royal palace where she resides - is haunted. The "ghosts" are all "very friendly," she said. (03.01.2017)

Sweden has reported a decent rise in car sales over the past 12 months. But for the first time in more than half a century, the best-selling vehicle in the Scandinavian country was not its iconic Volvo, but VW's Golf. (03.01.2017)

Chancellor Angela Merkel was met Tuesday morning by Mikael Damberg, Sweden's minister for enterprise and innovation, on her arrival at Stockholm's Arlanda airport.

The German Chancellor's first official stop was the royal palace, where she met with King Carl XVI Gustaf and German-born Queen Silvia.

Merkel later held talks with Swedish Prime Minister Stefan Lofven. Afterwards she responded to a question in relation to a comment from one of US President Donald Trump's advisers. Peter Navarro, the head of the White House National Trade Council, had claimed that Germany was bolstering its exports with what he called a "grossly undervalued" euro.

"We won’t exercise any influence over the European Central Bank, so I can’t and I don’t want to change the situation as it is now," Merkel said. "Beyond that, we strive to trade on the global market with competitive products in fair trade with all others."

Merkel said the independence of monetary policy was a central pillar of its approach.

"As far as the euro and its valuation goes, Germany is a country that has always called for the European Central Bank to do its work independently, just as the Bundesbank did when there was no euro," Merkel said.

On another issue, Lofven and Merkel described the US decision to ban travel for citizens of certain countries, and to block refugees entering the US as "regrettable." They expressed concern that it could be "counterproductive."

"The fight against terrorism does not justify singling out a certain population group," Merkel said after the talks in Stockholm.

Ahead of the EU summit in Malta on Friday, Merkel underlined that it's not enough to talk. "We must also act," she said.

"We will be determined to carry the work forward as it is not enough to speak, but it must also be followed by deeds," Merkel said.

The Chancellor noted that Malta was engaged in finding solutions for migrants fleeing from Libya to Italy. She said it was necessary to see "how we can contribute to stabilizing the situation in Libya."

"We want to make sure that people don't have to flee their countries in the first place," Lofven said after the meeting with the German chancellor, whose itinerary next takes her on a brief visit to Ankara.