On opening night of the 2021/22 Champions League season, Julian Nagelsmann's Bayern Munich faced Barcelona in one of the most anticipated games of the competition. In the end, it proved a mismatch. 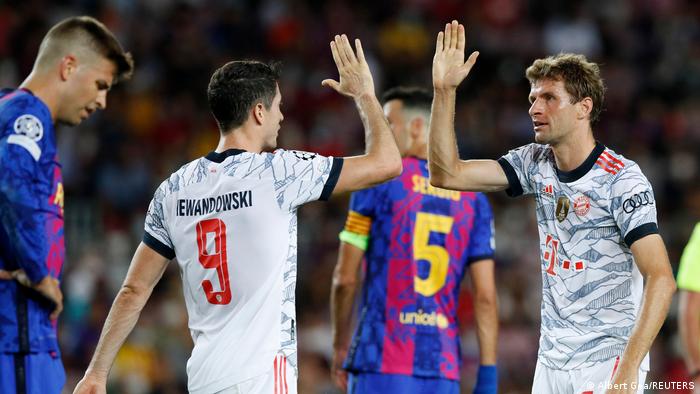 As he did a year ago in Lisbon, Thomas Müller put Bayern ahead. It wasn't as early, and it was a far scruffier goal, but Barcelona must have felt history was repeating itself.

Six of the Barcelona starting lineup were there in Portugal a year ago, but a lot more has changed since that historic night when Bayern scored eight goals to break and belittle Barca.

Bayern Munich has a different head coach now, while Barcelona no longer have Lionel Messi to turn to. And yet the same haunting reality remains for Barcelona. What used to be one of the most prestigious European games is now a mismatch between two clubs moving in opposite directions.

Ahead of this game, Marc Roca told Mundo Deportivo that Julian Nagelsmann was a head coach "committed to modern football." In Barcelona, the result of that commitment was on show as, after an opening 10 minutes in which to find their feet, Bayern dominated the home side. Thomas Müller's deflected goal from outside the area was the least fitting way for Bayern to get the goal they deserved.

Despite Joshua Kimmich getting booked in the fifth minute, Bayern were strong. They manipulated space better than their hosts, controlling the game to a point where Barcelona's steady retreat was alarming. If Hansi Flick's Bayern devoured Barcelona, Julian Nagelsmann's Bayern slowly but surely sucked the life out of them.

Nagelsmann's Bayern is not as gung-ho as Flick's and with that comes balance. The line between risk and reward was no longer blurred because it didn't need to be. Despite the loud, wild antics of Nagelsmann on the sidelines, Bayern looked a steady, active, almost calming presence, lulling their seemingly hopeless hosts into submission.

Were it not for Marc-Andre ter Stegen, that dominance would have been better reflected in the scoreline. The German keeper twice denied Leroy Sané, although could do nothing about Jamal Musiala's thunderous effort off the post or that Robert Lewandowski was the fastest to the rebound.

A raft of changes for the home side reestablished some order but only briefly. Soon Bayern's players were lining up to score and when Serge Gnabry's effort hit the inside of the post it was almost inevitable that Lewandowski would pounce. That the Pole had time to dance around desperate defenders before slotting into the top corner says everything about where both sides are.

Long before then though, Bayern Munich had already taken it down a gear or two. What has become a regular sight in the Bundesliga was suddenly happening with 15 minutes to go against Barcelona.

While that likely says more about the woes of the Spanish side, it is also a reminder to the rest of Europe that Bayern Munich is living through a golden age and it's one they want to prolong.

Re-live Bayern Munich's win in Barcelona in our live blog:

Bayern Munich ease to one of their most comfortable away wins in Europe. That it comes in Barcelona says it all about where the two sides are.

Nagelsmann is all smiles. Gnabry's effort hits the post along the ground but rebounds to Lewandowski. The Pole keeps his calm, dribbles around the defender on the floor and then fires into the top corner. Deserved, and it could have been more.

The game is winding down as Bayern stay in enormous control. Upamecano and Gavi are booked. Sabitzer makes his European debut for Bayern replacing Müller, Coman is on for Sané and Josip Stanisic is on for Süle. What a luxury to make such changes in this game.

Barcelona make a host of subs, much to the displeasure of the home crowd it seems. Ironically, one of those changes is the arrival of Philippe Coutinho, the man who scored two for Bayern in that 8-2 win. Bayern also make changes, with Hernandez replacing Pavard. Then Gnabry comes on for Musiala. 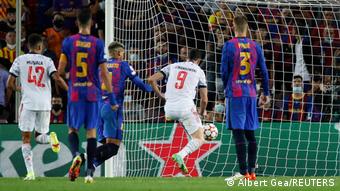 Bayern's dominance continues. After Sané is denied by another great save by ter Stegen, Bayern get their second and it's deserved. Jamal Musiala lets fly from outside the box. That effort hits the post and Lewandowski reacts quickest to the rebound. Game over. Now a question of how many do Bayern want, I think.

We are back underway. Can Barcelona find something?

Bayern dominant and deservedly ahead albeit in ugly fashion. Barcelona have had their moments but they've been rare and the Spanish side look as short of ideas as they did a year ago in Lisbon.

Bayern have the lead! Bayern play it neatly down the left, Müller has space outside the area and he just has a go. He's rewarded too. His effort takes a wicked deflection off Eric Garcia and ter Stegen has no chance.

30' Chances for both sides

The game is getting a little chippy. Goretzka is strong in the tackle but the foul is called. Nagelsmann is shouting loudly on the sidelines, as he usually does. Then a poor pass by Barca opens up a chance for Bayern. Kimmich threads it to Müller who sets up Musiala but it's blocked. The teenager tries to keep it alive but not for long. Barca respond with a header from Araujo but it sails over. 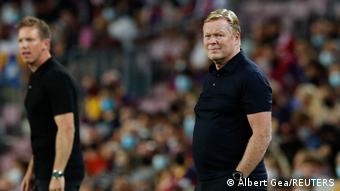 Lots of gas on offer here and Bayern slowly picking their way through it. Sané gets to a deep cross and ter Stegen has to make a smart reflex save to deny him. The first real chance of the game and it's a good one.

Kimmich booked early on for a clear tactical foul on De Jong. That will make him play differently. Sané sends a free kick into the wall. Had the chance to do more with that I think. Both sides finding their feet a bit.

Camp Nou isn't full but it's louder than the crowd was the last time these two met in Lisbon. We're off!

Just over a year ago, Bayern Munich dealt Barcelona one of their worst ever defeats. Since then, Bayern have added quality to an already formidable squad, while Barcelona have lost talisman Lionel Messi and Antoine Griezmann amid salary-cap troubles. Tonight they meet again, and here are the teams.

Serge Gnabry is in the squad but obviously not fully fit and so is replaced by the in-form Jamal Musiala. What a moment for the teenager.

For Barcelona, it's a pretty Dutch affair with two De Jongs and Memphis. Pedri is in as well, of course.

"They've no longer got someone as extravagant as Messi, but they have other players who can make a difference.

"We are prepared for everything. I'm not of the opinion that they are a lot worse off now. In any case, we definitely want three points."

"It's been more than a year and several players suffered a lot in that game [the 8-2 defeat]. We have a unique opportunity.

"We can hurt Bayern and we have a good team. We have to look for our style to hurt the opposition."

Bayern travel to Barcelona with almost a full squad; only Corentin Tolisso is missing due to injury.

Both Robert Lewandowski (adductor) and Serge Gnabry (back) were withdrawn in the recent victory over RB Leipzig, but are expected to recover in time.

Bayern are on a five-game winning streak following a 1-1 draw with Gladbach on the opening day of the season.

Barcelona head into this clash with a number of injury concerns.

Forwards Ansu Fati, Sergio Aguero, Ousmane Dembele, and Martin Braithwaite are all missing, while there are also doubts over the fitness of defenders Jordi Alba and Sergino Dest.

As a result, coach Ronald Koemann may be forced to tinker with his favored 4-3-3 formation. On the plus side, Barcelona's fixture against Sevilla scheduled for the weekend was postponed, giving the Blaugrana extra time to prepare.