Mahamat Said, a former leader of a militia group in the Central African Republic, faces 14 charges at the International Criminal Court of war crimes and crimes against humanity. 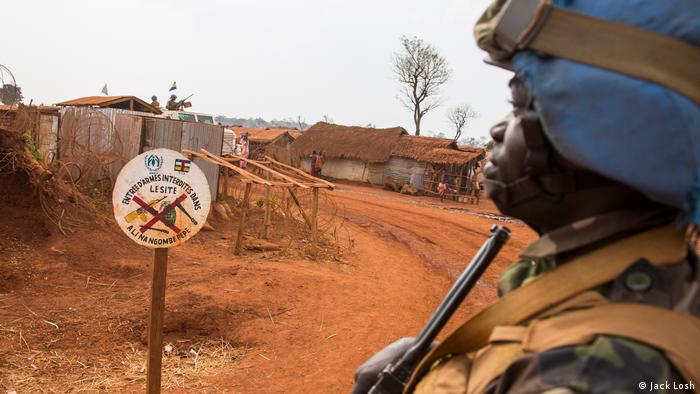 Mahamat Said allegedly encouraged and took part in the beatings and mistreatment in 2013.

Mahamat Said is facing more than a dozen charges at the International Criminal Court (ICC), including torture, persecution, enforced disappearance, and cruel treatment, over his alleged role in war crimes during the Central African Republic's civil war.

Judges will make a decision within the coming weeks on whether or not to confirm the charges against the ex-rebel commander, potentially bringing the case to trial.

What is Mahamat Said accused of?

Prosecutors have accused Said, 51, of overseeing a "catalogue of misery" during the CAR's civil war that escalated in 2013.

Said, 51, appeared before the International Criminal Court for a pre-trial hearing on October 12, known as the confirmation of charges hearing, for his alleged crimes against humanity as well as war crimes.

He faces 14 charges in total.

Said is allegedly a former commander of the Seleka, meaning "alliance" in the Sango language, a rebel coalition made up largely of the CAR's Muslim minority from northern regions. Prosecutors have accused him of running two detention centers where the crimes are alleged to have taken place.

The Seleka's ouster of then-President Francois Bozize in 2013 — and subsequent iron-fist rule — sparked a wave of bloody violence between the group that seized power and vigilante militias known as the anti-Balaka, which is mostly made up of Christians.

The international court issued an arrest warrant against Said in January 2019, but he was only handed over by Central African authorities on 24 January 2021 for his alleged role in the violence, which included torture, enforced disappearance, and persecution.

CAR hopes for justice in first anti-Balaka trial at ICC

During the opening of the confirmation of charges hearing, chief prosecutor Karim Ahmad Khan said the evidence showed that Said encouraged, facilitated and took part in the "beatings and mistreatment."

"People were put in just appalling conditions with no regard for their humanity," said Khan, adding that Said and his group targeted people who they perceived to be supporters of former President Bozize.

The court saw an image of a survivor whose hands were tied together "with ankles and elbows to contort the human body from its natural pose into an extremely painful debilitating form of cruelty."

Referring to a survivor's statement, Khan said: "The pain was so excruciating, he asked his tormentors to put him out of his misery and kill him."

The prosecutor added that the evidence overwhelmingly shows that Said was in the room where it happened.

The court saw another image of an underground cell, dubbed "the hole," which was covered with wooden planks and a desk on top. The cell, which held up to three detainees at one time, was where prisoners faced especially brutal conditions. One survivor described seeing a dead prisoner in the cell.

"Standing above them was Mr. Said — the area above was his office," Khan said.

"Literally standing on their heads, trampling on their dignity, stamping on their rights, he cannot plead ignorance. The smell was awful, the proximity could not have been closer."

Prosecutors say the prisoners were left without a toilet and with little to no food, with some resorting to drinking their own urine.

Khan said there was no evidence that Said was linked to any of the killings or rapes that occurred during the country's civil war — but that the evidence pointed to his involvement in detaining opponents.

Said is the first suspect from the Seleka side of the conflict to face war crimes charges at the ICC.

The judges in the pre-trial hearing are expected to deliver their written decision by December 13.

CAR conflict: Who else faces charges?

Two other men, accused of being key members of the anti-Balaka militias, are currently on trial at the ICC for charges including murder, torture, and the use of child soldiers during the sectarian violence.

Alfred Yekatom, a member of parliament also known as Rambo, is accused of crimes against humanity during his alleged role as a key member of the anti-Balaka. He was handed over to the ICC in 2019.

Former CAR football chief Patrice-Edouard Ngaissona was arrested on an ICC warrant in 2018 that described him as the "most senior leader" of the anti-Balaka militias. He faces additional charges of rape and attempted rape.

Both men have pleaded not guilty to all charges.

The mineral-rich Central African Republic is facing a cycle of violence that has displaced about a fifth of the country's nearly 5 million people. The CAR has also plunged into a humanitarian crisis of poverty, hunger and malnutrition.

The former leader, Bozize, seized power in a 2003 coup before being ousted in 2013 by the Seleka.

The Seleka was initially formed in December 2012 with an agreement between several rebel groups that had previously fought against the government in the capital, Bangui. Their grievances included decades of political and economic persecution and marginalization, impunity of violence, and broken promises from years of fighting and peace deals.

The rebel coalition was dissolved in 2013 after a key leader of the Seleka became the CAR's interim president.

In 2019, a peace deal was reached between the government and various armed rebel groups — but intermittent fighting since then has threatened the agreement.

A rebel insurgency interrupted the first round of voting, but officials are confident stepped-up security measures will prevent further violence.

The trial of Bosco Ntaganda, who is accused of war crimes and crimes against humanity, has now begun in The Hague. He is not the only Congolese warlord to have to answer to the International Criminal Court.