Catholic bishops in Amazon vote for ordination of married men

Amazonian Catholic bishops have voted in favor of the ordination of married men in the region and to reopen the debate into allowing women deacons. The pope will now consider the historic vote. 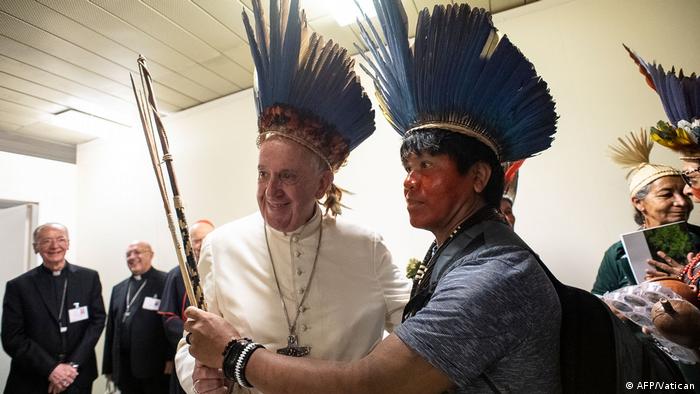 Catholic bishops from across the Amazon called on Saturday for the ordination of married men as priests in remote parts of the region. Pope Francis will now consider the matter.

A majority of the 180 bishops from nine Amazonian countries present at the synod voted in favor of the move, and also to reopen the debate into the ordination of women.

"It is urgent for the church in the Amazon to promote and confer ministries for men and women in an equitable manner," a representative said as the synod concluded.

128 bishops voted in favor of the proposal and 41 against. Many bishops believe that the move would allow more Catholics to attend Mass.

The pontiff said he will consider the issues raised by the synod before the year's end. The synod, a gathering of bishops form the Amazon region, will officially end on Sunday.

Celibacy has been a requirement for Catholic priests for almost a thousand years.

Read more: The Christian church: Dying out or thriving like never before?

Catholic celibacy in the Amazon

Is celibacy a threat to Catholic communities in the Amazon?

The proposal aims to increase the number of priests in rural areas of the Amazon basin, where many Catholics cannot attend Mass owing to a lack of priests.

If Pope Francis green lights the vote, this would allow deacons "of proven virtue" who are married men in the Amazon region to be ordained as priests.

As well as also proposing reopening the discussion around women deacons, the synod also proposed making damage to the environment a sin. So-called "ecological sin" would then be in violation of divine law.

Allowing married men to become priests would require a papal exemption of a Catholic rite, such as the one already in place for married Anglican priests who convert to Catholicism.

US election: Trump, Biden face off in Florida over coronavirus 22m ago

New Zealanders vote to legalize euthanasia but not cannabis 3h ago

Coronavirus: EU at risk of being overwhelmed, says Von der Leyen 6h ago