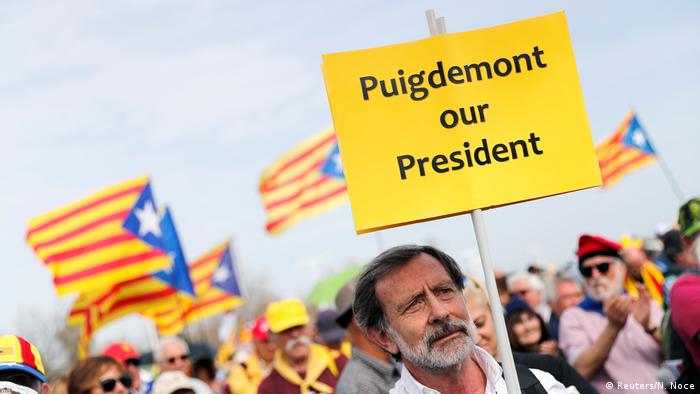 Tens of thousands of Catalan independence supporters held a major rally in Perpignan, southeastern France, on Saturday. The demonstrators gathered to support the exiled former Catalan leader Carles Puigdemont, who called on independence advocates to prepare for a "definitive struggle" for independence.

The rally, which took place 30 kilometers (18 miles) from the Spanish border, was held with the slogan: "The republic at the center of the world," a reference to their desired republic.

"Attaining independence hasn't been easy, and we knew it wouldn't be," Puigdemont told those gathered at the rally. "We know that we won't give up and that they won't stop us."

The movement's political alliance, Together for Catalonia, will be competing for votes with other separatists in an upcoming regional election in Catalonia.

He also called for a "permanent mobilization" against a "monarchical regime which is a direct heir of Francoism," referring to Spain's former dictator Francisco Franco.

Local authorities estimated around 100,000 people turned out, while organizers pegged it at 150,000.

A new chapter for Puigdemont

On Friday night, he also attended a rugby match in Perpignan and was welcomed by the city's mayor, Jean-Marc Pujol. Previously, he had not risked traveling to France, where police and courts work closely with the Spanish government. However, that changed after he was granted immunity as a member of the European parliament.

Friday and Saturday marked the moment in which Puigdemonthas been closest to Spain since he fled the country in October 2017 after calling a failed independence referendum.

Spain's constitution states that the country is indivisible. But like other Spanish regions, Catalonia has financial, administrative and legislative autonomy. Roughly half of the 7.5-million-person population are in favor of independence.

Catalans march for independence ahead of Madrid talks 11.09.2021