The five countries bordering the landlocked Caspian Sea recently struck a deal to resolve their longstanding dispute over its ownership. Experts say the agreement makes Russia the "de facto naval power" in the region. 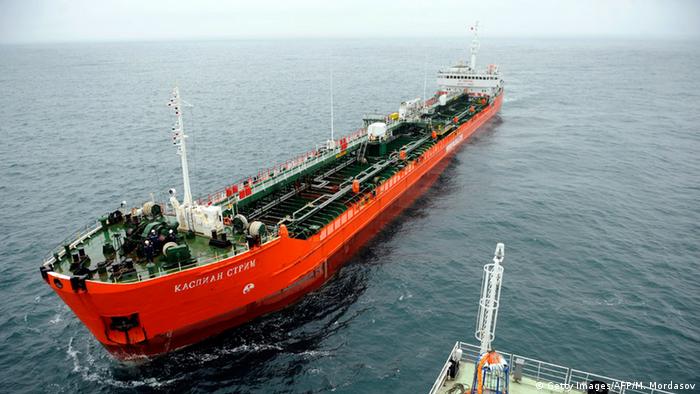 The leaders of the five countries bordering the Caspian Sea signed a landmark convention on Sunday regarding the legal status of the body of water.

The inland sea has been a bone of contention among the five countries since the demise of the Soviet Union in 1991.

The agreement is expected to ease regional tensions, and could accelerate the development of lucrative oil and gas projects.

The Caspian Sea is estimated to hold some 48 billion barrels of oil and 292 trillion cubic feet of natural gas, according to the US Energy Information Administration.

Russian President Vladimir Putin, who pushed for an agreement, said the deal had "epoch-making significance" and called for more military cooperation among the countries bordering the Caspian.

But some observers remain skeptical as to whether the countries managed to put their disagreements to rest.

"This document is hardly a breakthrough, as some of the controversial issues remain unresolved," Arkadij Dubnow, a Russia-based expert on Central Asia, told DW. "But the current geopolitical circumstances have forced the parties to compromise," he added.

"The deal is nothing but a framework that somehow defines the rules of the game, but there is no agreement on the game itself."

One issue among the participants was whether the body of water is a sea or a lake — each of which is subject to different international laws.

The convention refers to the Caspian as a sea but Russia's Deputy Foreign Minister Grigory Karasin told the daily newspaper Kommersant that provisions in the treaty give it "a special legal status."

The convention keeps most of the sea in shared use but nonetheless divides up the seabed and underground resources, according to the Kremlin.

But Dubnow said an agreement on the division of the seabed "will, in my view, take years, not months."

Iran ended up with the smallest share of the sea in accordance with the terms of the deal, and may end up a potential loser in the agreement.

That would explain why Iranian President Hassan Rouhani called the deal "a major document" on Sunday but stressed that it doesn't solve all of the disagreements surrounding the sea.

"Today we have a framework for actions in the Caspian Sea which was not the case before," Rouhani said in comments translated into English. "But there are other issues to deal with in other meetings."

Still, Rouhani hailed a stipulation in the convention that prevents non-Caspian countries from deploying military forces on the sea.

"The Caspian Sea," he said, "only belongs to the Caspian states."

For Iran, stopping US presence in the region is of primary concern, say observers.

"That's why Tehran has, at least formally, given up its insistence on either splitting the sea into five equal parts or jointly developing all of its resources," Dubnow underlined.

"Banning foreign military presence in the Caspian Sea is at the heart of this agreement," Amir Taheri, an Iranian political analyst, told DW. "The fact that Iran agreed to this deal shows Tehran's current weak geopolitical position," the expert added.

He pointed out that US sanctions against Iran, coupled with Tehran's need for Moscow's support on the global arena, ensured that the Iranian government lacked much room for maneuver during the negotiations.

"The deal has prompted a lot of criticism in Iran," said the analyst.

Experts say the agreement allows Russia to strengthen its relations with the Caspian Sea states and prevent the US from establishing any military presence in the region.

"The agreement is extremely beneficial to Russia. It makes Moscow the de facto naval power in the Caspian Sea by granting Russian warships the right to operate unhindered throughout the waterway," Russian expert Dubnow said.