Cases of far-right extremism on the rise in German military

An increase in suspected far-right incidents within the German army, the Bundeswehr, has prompted the opposition Left party to demand that commanders "dry out the brown sump." More than 400 cases are under investigation. 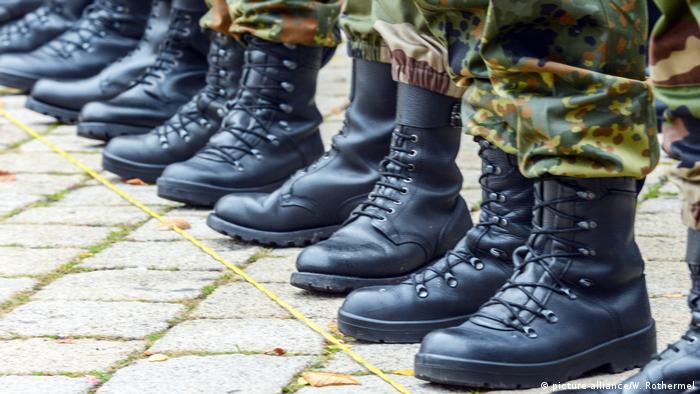 Cases of far-right extremism within the German armed forces have almost doubled, according to a report published Thursday by newspapers belonging to the Funkemedia group, citing a Defense Ministry response to a parliamentary question tabled by the opposition Left party.

The German military's internal intelligence agency, the Militärische Abschirmdienst (MAD), is currently investigating 431 cases, compared with 275 at this point last year. Twenty-three new cases have arisen since the start of 2018 on top of 289 cases from last year, plus older cases predating 2017.

She added, however, that "more and more" soldiers are no longer willing to silently tolerate the "far-right behavior of their comrades" and appealed for support for whistleblowers.

"Instead of closing its eyes, the federal government must at long last take necessary measures, and dry out the brown sump," Jelpka said.

Commanders appear to be overly lenient, Jelpka said: "Those who scribble swastikas must be sacked, and he should not again end up with a weapon in his hands."

The Bundeswehr must exercise zero tolerance in its ranks toward neo-Nazis and Reichsbürger, Jelpka insisted, referring to a movement averse to Germany's democratic order.

Prominent cases, including a soldier named only as Franco Hans A., prompted Defense Minister, Ursula von der Leyen, recently to persuade commanders to adopt a new "tradition directive" and renounce remembrance practices dating back to the Nazi-era Wehrmacht and the former East German People's Army.

One soldier, it said, had described refugees as a scourge requiring "eradication," during a Bundeswehr political education seminar.

Another had told subordinates that on deployment to Mali they would "shoot Africans heads off," according to Bartels report.

It also has 39,000 civilian administrative personnel. Its combined ranks include 21,000 women soldiers.

German federal prosecutors have searched apartments of people suspected of founding a far-right terror group. The so-called Reichsbürger are said to have considered killing people to further their aims. (08.04.2018)