Carles Puigdemont weighs return to Spain amid threat of jail

The fugitive ex-president of Catalonia wants to return to Spain to be re-elected as leader of the autonomous region. But the challenge for him will be doing that without getting arrested. 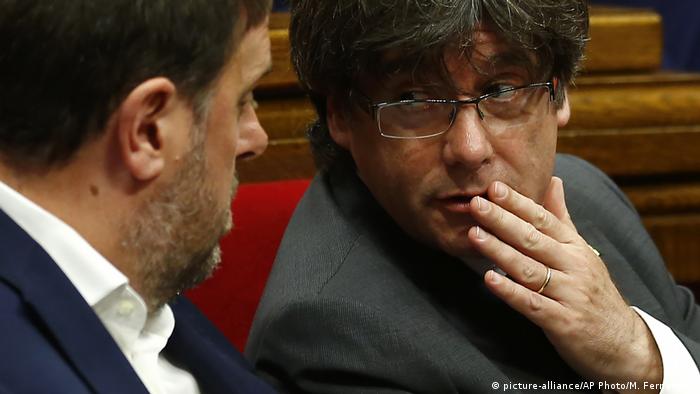 Carles Puigdemont, the fugitive ex-president of Catalonia, wants to attend the next session of the regional parliament on Tuesday but avoid being arrested in the process.

He has sent a letter to the Catalan parliament asking the body to guarantee his right to attend the parliamentary session without being taken into custody. Puigdemont fled to Belgium following an illegal declaration of independence last October.

It's unclear if the chamber even has such authority but a couple of court rulings suggest Puigdemont faces long odds of returning to Spain and getting elected regional president without getting arrested along the way.

Spain's Constitutional Court ruled Saturday that Puigdemont must be present at the parliamentary session in order to get re-elected president. The high court has also ruled that Puigdemont must get the court's permission to attend the session, although he appears to be the only official candidate for regional president.

Puigdemont initially planned to do that but on Monday his lawyer said that was unlikely. His attorney, however, did not rule out Puigdemont's attendance at the meeting. But here, too, the Constitutional Court has ruled that the parliamentary session would be invalid if Puigdemont attends without the court's approval.

Madrid took over governing control of the province three months ago after the Catalan parliament declared independence.

Thousands of companies have relocated their legal headquarters to other parts of Spain due to the uncertain political situation in Catalonia. In the latest election held in December, separatists won a majority of seats — 70 out of 135 — but not a majority of votes , a sign of the political divisions across the region.

Madrid has vowed to extend its rule over Catalonia should the separatists try to install Puigdemont as regional president while he is abroad. Currently, three other Catalan separatists remain in jail, others have been freed on bail and five more are in self-imposed exile to avoid arrest.

The separatists' parliamentary majority gives them incentive to seek some sort of compromise, as a stalemate would eventually lead to new elections, which could threaten their outright majority

Indeed, Roger Torrent, the parliament's new speaker, has struck a more conciliatory tone, beginning with his inaugurations speech where he spoke of the need for unity

Catalonia also lacks an obvious alternative candidate to Puigdemont because ERC (Esquerra Republicana de Catalunya) leader Oriol Junqueras is in jail. For now the Catalan parliament looks to have two months to agree on a presidential candidate for the province.