Protesters all over Catalonia have demonstrated against the detention of Carles Puigdemont in Germany. The rallies are the latest in a string of protests that began after Spain jailed 13 Catalan politicians. 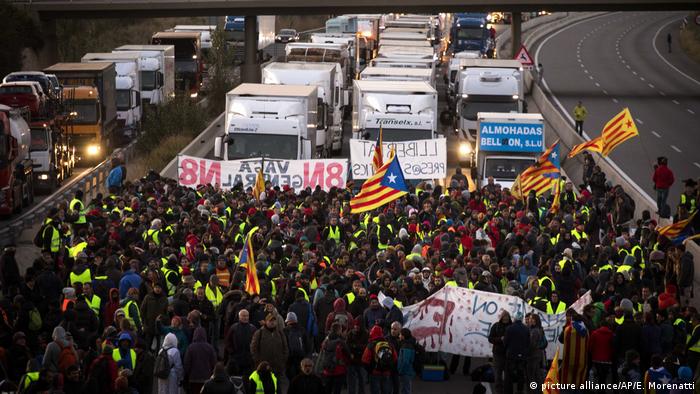 The pro-Catalan independence group Committee for the Defense of the Republic (CDR) urged citizens on Tuesday to block several roads and paralyze traffic to protest the detention of Carles Puigdemont in Germany.

The CDR has also called for a "general strike" in Barcelona, to begin at 16:00 UTC and to close the city's Sants rail station.

Tuesday's demonstrations were the latest in a string of protests that have taken place in Catalonia since tensions were reignited between pro-independence supporters and the Spanish state.

Protesters had planned to occupy motorways and highways for approximately an hour. The AP-7 motorway that links the region with France was one of the highways affected.

Catalonian police forces intervened to remove protesters who were sitting on the Ap-7 in order to stop traffic.

Some 200 demonstrators shut down highway N-340, near the city of Alcanar, for six hours. The motorway, which runs between the cities of Tarragona and Valencia, was eventually cleared of protesters by the regional police.

In Barcelona, demonstrators attempted to close the Diagonal Avenue, one of the main city routes, with banners reading "freedom for political prisoners" and "general strike."

Empresaris de Catalunya, an organization that represents Catalonia's business community, rejected Tuesday's "general strike" and warned about the damage that the recent day of protests would cause. "We cannot allow chaos and instability to be established again in our society," the business association's statement read.

The group stressed that the social tension produced by the efforts from pro-independence forces represented "a risk to the economy and employment in Catalonia." 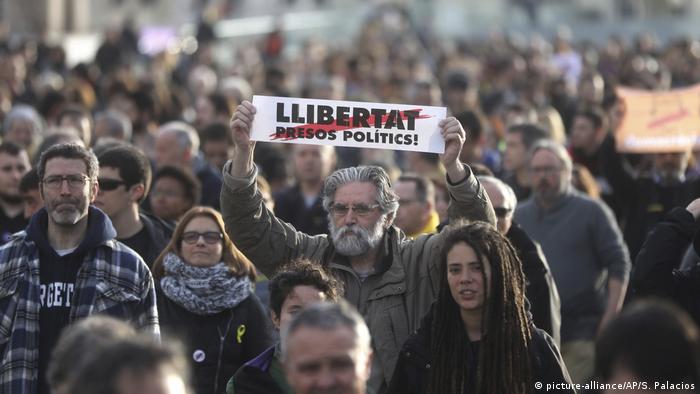 The CDR, a coalition of pro-independence Catalan groups, said in a statement on Monday that the latest actions of the Spanish state and the arrest of Puigdemont in Germany had led to a "point of no return."

The CDR called for the beginning of "the Catalan spring", in reference to the pro-democracy protest movement that swept Middle Eastern and North African countries in 2011. The statement called for protests across the region to reject "Spanish occupation" and for "the effective building of the republic."

The separatists called for a "general strike" on Tuesday in Barcelona, to take place at 6 pm (1600 UTC) in the city's Placa de Joan Peiro, a square in the southern Sants neighborhood. The group is also encouraging its supporters to surround the main Sants train station in Barcelona.

Tensions between Catalonia and Spain boiled over again when a Spanish judge issued a string of arrest warrants last Friday that included 13 Catalan politicians. Among those detained was the newest candidate for the Catalan presidency, Jordi Turull, who was supposed to be elected to the post on Saturday.

Over the weekend, Spain also reactivated the European arrest warrant on Carles Puigdemont, who was in Finland meeting with lawmakers. The ex-Catalan premier was arrested by German police on Sunday as he was on his way to Brussels. He will remain in custody until German courts decide on the extradition. A decision is not expected before Easter.

Carles Puigdemont expressed "his full trust in the German legal system," his attorney Gonzalo Boya said on Tuesday, and vowed to keep fighting on behalf of the cause of Catalan independence.

"He has said we will never surrender and that is his message to the Catalan people and also that they have the right to express their willingness for independence and a republic in Catalonia," attorney Boye said.