Can you have a greener period? Single-use sanitary products lead to a lot of plastic waste. What are the green alternatives?

Filmmaker Sugandhi Gadadhar spends half the month in the remote forests of India documenting wildlife. She used to have a recurring problem: how to dispose of sanitary products. The idea of discarding soiled pads out in the wilderness horrified her. Carrying them around for days until she got back to the city wasn't pleasant either.

All that changed when a colleague suggested switching to a menstrual cup.

"I was hesitant initially. But now, almost a decade later, I can't imagine life without it," says Gadadhar.

Every day around 800 million people menstruate. And according to some estimates based on the average number of period cycles, each person uses between 5,000 and 15,000 products over their lifetime, the majority of which will end up in landfills or the environment as plastic waste.

Overwhelmingly popular products like sanitary pads and tampons contain a lot of plastic. Both often come wrapped in the material and have a plastic layer in the absorbent part of the product. Many tampon brands also contain a plastic applicator and thread at the base, while some sanitary pads are made of up to 90% plastic. 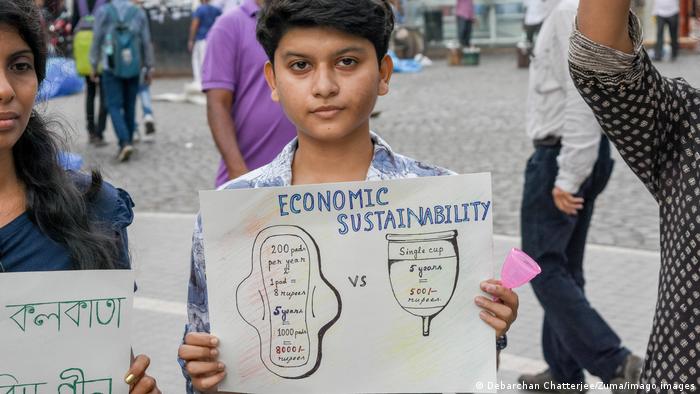 Single-use pads and tampons are made of mixed materials and are difficult to recycle. Reusable items like menstrual cups cut down on waste

As they comprise a mix of materials, sanitary products are difficult to recycle. In Europe, around 87% of pads and tampons end up on the dump. The number stands at around 80% in the United States. Often, the products are incinerated improperly, releasing toxic pollutants into the atmosphere.

In countries with no robust trash collection system, it's harder to quantify how much goes to the trash heap. But sanitary items frequently find their way into rivers, onto beaches and the side of the road, where the chemicals and microplastics they contain leach into the soil and water, threatening human, animal, and environmental health.

Despite the environmental cost, demand for these single-use products, which took off in the West around the time of World War II, continues to grow worldwide.

The sales value of the global tampon market alone was estimated to be worth around $44.45 billion (€40.4 billion) in 2018. And that is projected to grow.

Sanitary napkins and tampons are becoming increasingly popular in the Asia Pacific region, which is predicted to see the biggest growth in this market between 2020 and 2025. That's partly down to government initiatives to combat a lack of access to period products, as well as rapid urbanization, say analysts.

The popularity of these products is understandable given the time before pads "wasn't really great for women," says Supriya Garikipati, a gender economist at the University of Liverpool in the United Kingdom.

"Most people simply used a cloth pad that they would make at home, while poorer women used rags or even hay or mud, or lots of things that are not meant to be used in that area," adds Garikipati.

For those who have access, disposable products are more convenient. As they're discreet, they can be more easily hidden, which is particularly important in places where "period shame" is still an issue, said Garikipati. Estimates show that one in ten girls in Sub-Saharan Africa misses school during their period because of the stigma attached to menstruation.

Still, as the environmental impacts have become more apparent, those with the means have increasingly been turning to reusable menstrual products.

The rise of sustainable alternatives

Menstrual cups, originally patented around a century ago, really took off in the US and Europe around the year 2000. Other products followed suit, with reusable, washable liners and period underwear all gaining popularity. The global period underwear market, for example, is set to grow from $67.2 million (€61.2 million) in 2017 to $279.3 million (€254.4 million) by 2026.

Despite the explosion in options, some 500 million people in low-income and remote areas are affected by period poverty — a lack of access to menstrual products and education.

When they can get their hands on products, they tend to be single-use tampons and pads, which are more readily available and cheaper to buy. For example, in Germany, a three-pack of reusable period underwear costs around €90, while a box of 32 pads costs €5. Taken over a lifetime, reusable items might turn out to be cheaper, but many people cannot stump up that amount of cash in one go.

For those who can afford it, switching to multi-use alternatives seems an easy environmental choice, as they generate much less waste. The menstrual cup can last 10 years. Washable pads can be used up to five years, assuming a rotation of about 10 pads, while each pair of period underwear be reused up to two years.

But sustainability isn't a given with reusable products either.

They have to be washed well with water after each use. Factors like water temperature, detergent used, and drying method can influence the environmental impact of reusable products, like underwear and reusable pads, according to report by the United Nations Environment Programme (UNEP).

The report found that the menstrual cup scored best if cleaned with water heated using a kettle or a closed pot and if water was used efficiently.

There are also some concerns about how safe the reusable items truly area. In 2020, a reporter for the US environmental non-profit Sierra Club's magazine "Sierra" sent her period underwear to a nuclear physicist at Notre Dame University. He found PFAS, nicknamed forever chemicals, in "high levels."

PFAS can accumulate in our bodies. Though little is still known about their impacts, they have been linked to fertility problems and cancer.

Single-use products have been linked to health issues too. Toxic shock syndrome, a sometimes deadly condition caused by bacteria getting into the body, is associated with tampons. Some research by women's health groups found carcinogens like dioxin but other studies say the amounts are trace and not a cause for concern. 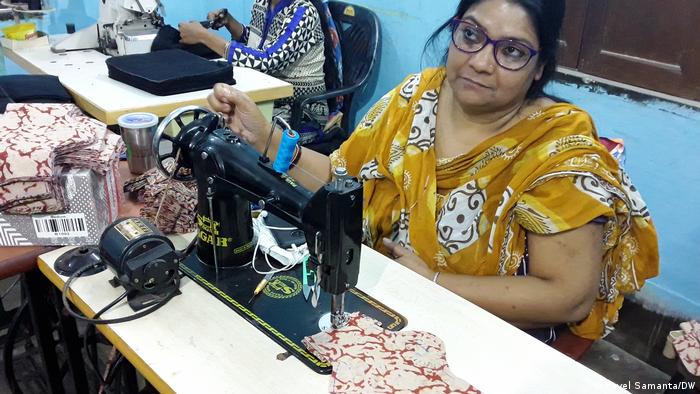 Organizations, including UK-based Women's Environmental Network (WEN), are asking for stricter regulation and legal standards for period products, including making manufacturers list all the ingredients used.

The road to greener periods

Still, despite some of their problems, governments are waking up to the new age of period products. The state government of Kerala in India, for instance experimented with giving out 5,000 free menstrual cups following a monsoon, when pads started floating in subsequent flood waters.

That's an indication to Supriya Garikipati that something has changed.

"Five years back, we faced a lot of resistance to introduce alternatives, so I'm hoping that the slippery slope has started," said Garikipati. "Of course, one mustn't forget the commercially made disposable pads are still making really useful inroads too, but I think these shifts will mean that the future of periods can be sustainable and cheap."

Helen Lynn, a campaigner for WEN, says it's not enough to hand out free products, though that "will make the switch faster." Education is key.

"We must educate women, girls and those who menstruate about how to use and care for them and also why they are a much better alternative for health, equity, wildlife and the environment," said Lynn.

Turkish women protest: 'Sanitary products are not a luxury'

For months, the "Campus Witches" of Turkey have protested against the rising cost of sanitary products, which they say should be free. For many of their compatriots, the subject of menstruation remains taboo.