Can Trump prevent a US recession in election year? | Business | Economy and finance news from a German perspective | DW | 22.08.2019

Donald Trump is pressuring the Fed to stave off a sharp economic downturn as he seeks reelection in 2020. The feelgood effects of his $1.5 billion program of tax cuts are due to run out soon, so what can he do? 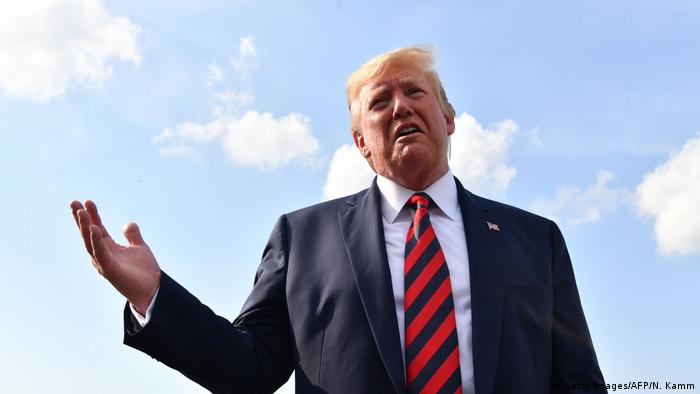 US President Donald Trump has spent several days trying to reassure American voters that the country will not face a recession next year, while at the same time demanding the Federal Reserve cut interest rates by 1% to stimulate growth.

Growing evidence suggests the US economy's longest-ever expansion — 11 consecutive years — may be coming to an end just as Trump seeks reelection next year.

One leading indicator spooked financial markets last week when interest rates on short-term US bonds moved higher than those for longer-term Treasurys. Known as the inverted yield curve, this anomaly has preceded every US recession since 1955.

Slowing manufacturing and freight movements, a drop in business confidence, falling property prices and an enduring US-China trade war have also contributed to concerns of an impending slowdown. The certainty of an eventual slump will weigh on US central bankers as they hold their annual meeting in Jackson Hole, Wyoming, on Friday.

It's clear to see why Trump is so worried. The US president faces the possibility that the effects of the $4.5 trillion stimuli, unleashed in the wake of the 2008/09 financial crisis, come crashing down in the middle of his campaign for a White House second term. He would then be the first president to seek reelection during a recession since Jimmy Carter.

In an attempt to easy monetary policy, the Fed has already cut interest rates once this year — the first time in more than a decade. Financial markets now expect a heftier cut before the end of the year, which Trump has urged as an insurance policy against a sudden downturn. 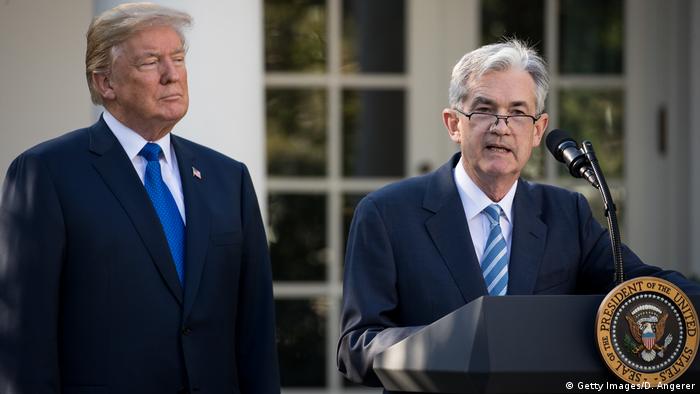 Most economists agree that as interest rates are already extremely low, further cuts will be less effective at stimulating the economy. The Fed, meanwhile, may be keen going forward to demonstrate its independence in the face of Trump's criticism of the agency's chairman, Jerome Powell. After all, the Fed's job is not to get a president reelected but to shore up the world's largest economy.

"We'll probably be in a recession by sometime next year," financial commentator Peter Schiff told DW. "We're going to finish the Great Recession that the Fed interrupted; only it's going to be much, much worse."

Due to the scale of response to the financial crisis, Schiff thinks the Fed will have limited tools to tackle the next downturn and will avoid "inflating an even bigger asset bubble than the one that's deflating right now."

If he's right, the central bank will hold back from releasing more quantitative easing (QE), a program that saw the Fed buy trillions of dollars of government bonds and mortgage-backed securities. QE was widely blamed for exacerbating inequality, by distorting stock and real estate values, which skyrocketed in the past decade.

Schiff also doubts that US policymakers will attempt to introduce negative interest rates, a high-risk strategy trialed by Japan and Europe, which he said would only "kick the can down the road for another decade."

The positive effects of Trump's $1.5 billion (€1.35 billion) program of corporate and income tax cuts, introduced two years ago, could also run out next year, prompting layoffs and a sharp drop in consumer spending just as he promises to "Keep America Great."

"They're not going to do any more tax cuts unless they're just targeted to the lower class," Schiff said, as America's working class benefited least from the last round of cuts.

The financial commentator said the Trump administration might be able to pass a speedy infrastructure spending bill to boost growth, but doubted whether it would have a positive impact: "So I'm not sure there's anything they can do but hope."

While Wall Street has ramped up recession fears, some economists doubt it will hit before the 2020 presidential election. They say record low unemployment, accelerated wage growth and strong consumer spending are unlikely to unwind so quickly and that the downturn will likely arrive a year later.

"The consumer, which makes up more than 70% of the US economy, is actually on pretty solid ground right now and is actually poised to spend at a faster rate over the next year or two," Sean Snaith, director of the Institute for Economic Forecasting (IEF) at the University of Central Florida, told DW.

While Trump's attempts at browbeating the Fed may have limited effect, he said the president could help to lengthen the longest US economic boom by abandoning his hawkish trade rhetoric.

"The biggest thing that would dispel this recession boogeyman would be some resolution in the trade spat with China," Snaith added.

Trump's decision to delay imposing 10% tariffs of $156 billion of Chinese goods is almost certainly an acknowledgment that the trade war is hurting his reelection chances. Cheaper Chinese imports should help boost US consumer spending, especially during the busy winter holiday season.

Europe's auto sector, meanwhile, can probably take heart that Trump is unlikely to impose tariffs on foreign cars before the election, for fear of upsetting those middle-class American drivers planning on buying new wheels. After all, the International Monetary Fund (IMF) estimates that US consumers are already bearing the burden of Trump's existing tariffs.

The IMF has also weighed in on Trump's bid to stave off a recession, warning the president in a blog post that his calls to ease monetary policy to weaken the dollar and improve the US trade balance won't work.

"Monetary policy alone is unlikely to induce the large and persistent devaluations that are needed to bring that result ... especially within a 12-month period," wrote Gita Gopinath, the IMF's chief economist.

The IMF has previously warned of a "precarious" 2020 for the global economy.

Fresh figures suggest that Europe's biggest economy may be heading for a recession, as its growth slowed in the second quarter. Calls for more fiscal stimulus are growing louder, but the government sees no need for it. (14.08.2019)

Trump's tax cuts have little impact on hiring in the US

Business economists from the United States have painted a bright picture for the coming months, but the latest survey of their professional association NABE downplayed the Trump administration's tax and trade policies. (23.04.2018)