Can the National Guard save Ukraine?

Ukraine appears to be preparing for war with Russia. The newly-founded National Guard, planned to include armed militia, is to support the armed forces.

On a grey day in March, a popular café on Khreshchatyk Boulevard near the Maidan in Kyiv is closed to guests. Instead, men wearing green camouflage uniforms and dark red berets come and go. On the street next to the entrance, men in plain clothes have gathered around a plain table and three chairs. The men are listening intently to a young officer: Ukraine's National Guard is recruiting volunteers.

"We've only been here for a few days," says Colonel Myhailo Kardinal, a sturdy man in his mid-forties. "Our task is to inform people and refer those interested to the conscription centers." Kardinal heads the recruitment service for the National Guard, which is affiliated with the Ukrainian Interior Ministry. 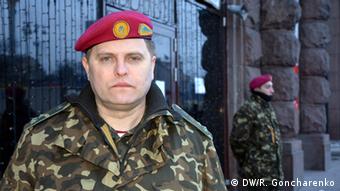 Colonel Kardinal says it's mainly professional soldiers who will sign up

Ukraine's parliament founded the National Guard on March 12. Eventually it should have 60,000 troops whose job will be ensure the country's security, control its borders and defend against terrorism. The government plans to recruit between 10,000 and 15,000 men by the end of March. "Most of them will be professional soldiers who will sign contracts for three or five years," says Kardinal.

The new troops are designed to help keep things under control in the country in times of crisis. The National Guard would back up police and the army in situations like the recent unrest and shootings in eastern Ukraine - or should it come to an open war with Russia, as Kyiv fears. Observers in Kyiv say the assistance is much needed: the police, they say, are demoralized after the recent changes of government, and the Ukrainian army, underfinanced for years, is far inferior to the Russian armed forces in number and technology.

Kardinal hopes that there won't be any financial problems this time. "The government promised to increase military spending tenfold," the officer says. Still, the pay he offers volunteers isn't generous. Regular soldiers in the National Guard make about 214 euros ($297) a month, which amounts to an average Ukrainian income. Officers earn twice as much, Kardinal says.

This isn't Ukraine's first National Guard. That was founded in late 1991, after Ukraine declared independence while the Soviet Union still existed. The National Guard was then directly responsible to the President and well provided for. Among its duties were disaster management and the protection of senior politicians and foreign embassies. The guard was dissolved in 2000, and its units were assigned to the Interior Ministry.

'Russia wants us on our knees' 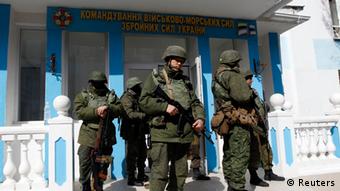 "About 100 men have volunteered today," Kardinal says. Andrij is one of them, a tall slim man with short grey hair. He served with the National Guard before in the mid-1990s, and is now signing up as a volunteer. "For me, Russian troops marching into Crimea was the catalyst," he says softly. "The Russians should stay out of Crimea," he says.

Andrij is 36, works for a transport company and has a daughter. During his first stint with the National Guard, he commanded a unit of armored personnel carriers. Today, he doesn't care where he is deployed. "I simply can't sit around at home any more," says Andrij, who fears there may be a war between Russia and Ukraine.

The government in Kyiv had yet another objective in mind when it created the National Guard: it wanted to disarm the volunteer militias that were formed during the revolutionary events in February. Both the Interior Ministry and the SBU intelligence service have called on Ukrainians to hand in illegal weapons.

The appeal is also directed at the far-right Pravy Sektor (Right Sector) movement that played a key role in the clashes between anti-government demonstrators and police in Kyiv. According to Ukrainian media reports, many members have paramilitary training, and they have refused to hand in their weapons. The movement's leader Dmytro Yarosh has been quoted as dismissing the National Guard's drills as something that looks like an excursion to a military base rather than "real combat training."

After reaching out to Crimea to join Russia, no one's sure what Putin will do next to make his 'divided' country whole. NATO sees a wider regional strategy at play. DW looks at the key areas that could be affected. (20.03.2014)

Out in force: Ukraine's Self-Defense