Can the EU save Poland′s Bialowieza forest? | Environment| All topics from climate change to conservation | DW | 11.09.2017

Can the EU save Poland's Bialowieza forest?

Poland is refusing to comply with a European Union order to stop logging in the Bialowieza forest. It's unprecedented - the EU may now impose hefty fines. It could even withdraw EU funding for Poland. But will it? 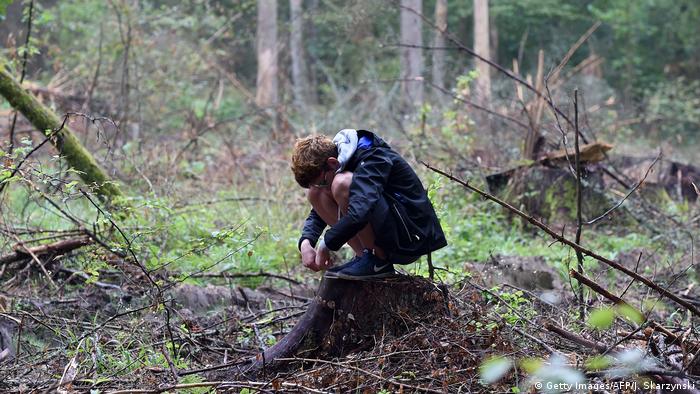 Jan Szyszko, Poland's environment minister, is getting an earful at the European Court of Justice in Luxembourg today.

In July, the EU's high court issued an injunction forbidding the country from continuing to allow logging in Bialowieza, Europe's oldest forest. But in an unprecedented move, Poland's government has ignored the order, and continued to allow logging.

This is the first case that an EU member state has ignored such an injunction, according to environmental law firm Client Earth. It is rare for a minister to appear before the court - but today it falls to Szyszko to explain the government's actions.

The injunction was issued while the court considers whether Poland is violating EU law by allowing large-scale logging, as it stands accused by the European Commission.

The forest is a protected area under EU law, where logging activity is restricted. Poland, for its part, says the logging is necessary to fight an outbreak of bark beetles.

"This is one of the biggest misunderstandings ever seen," he told the court today.

But nongovernmental organizations say this is being used as an excuse to give loggers access to the valuable old-growth wood. 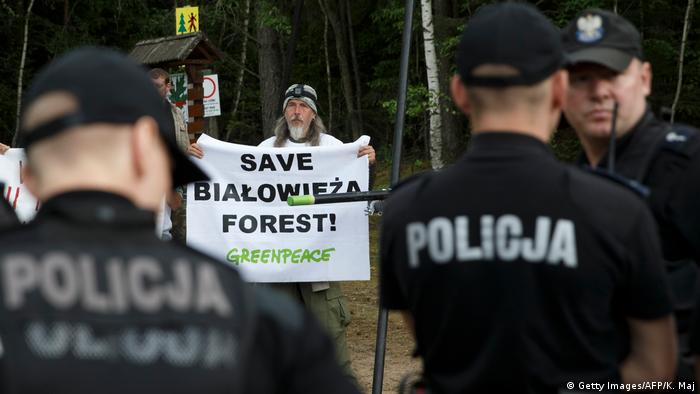 Activists have been protesting logging in Bialowieza forest

Forest fight in the thick of political problems

The logging has attracted sometimes violent protests, with many arrests. Krzysztof Cibor of Greenpeace Poland says that the logging must be urgently stopped in order to save the forest, because a final ruling on whether Poland is violating EU law is not expected until next year.

"Every day of continued logging is destructive for the forest," he told DW. "The forest will recover if they stop logging now."

The issue has become part of a larger confrontation between the European Commission and Poland's right-wing Law and Justice government, which has been consolidating power since it came into office in 2015.

The Commission is also pursuing infringement action against Poland for rule of law violations and interference with the country's judiciary. The Law and Justice regime may be doubling down on the forest issue to show its supporters that it is standing up to Brussels.

The court is expected to rule in the next few days on whether Poland has violated the injunction, and whether the beetle situation and threat to public safety means the injunction should be rescinded. What happens though if the court maintains the injunction, but Poland refuses to stop the logging? 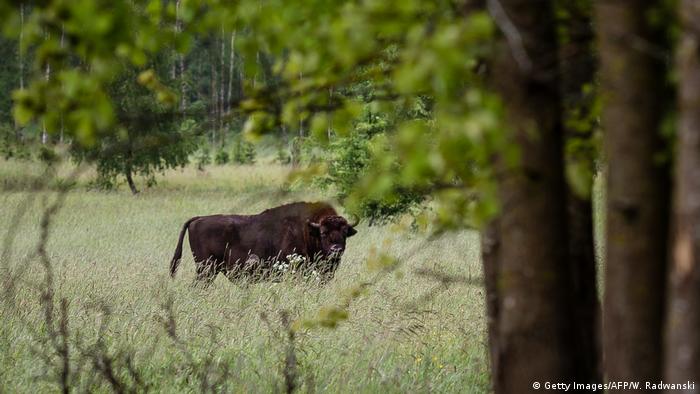 Agata Szafraniuk, a lawyer with ClientEarth, says because the situation of a member country defying a ban is unprecedented, this makes the consequences unclear.

"Poland would be the very first member of the EU to announce that they will defy an order of the court of justice, so it's not clear what will happen next because there are no clear precedents in EU law," she told DW.

The commission has two options: If Poland continues logging, the EU executive can launch a second infringement procedure against the country specifically for violating the injunction.

It could also withhold EU structural funds from Poland - something allowed in EU treaties, but never used before. Poland receives 21 billion euros ($25 million) in EU structural funds each year, much of it for environmental protection. In theory, all of this could be withheld.

Previously, EU member states have always complied with EU infringement rulings. The closest a country ever came to not complying was in 2001, when Greece initially said it would not pay a fine for failing to stop the dumping of toxic waste in a river. 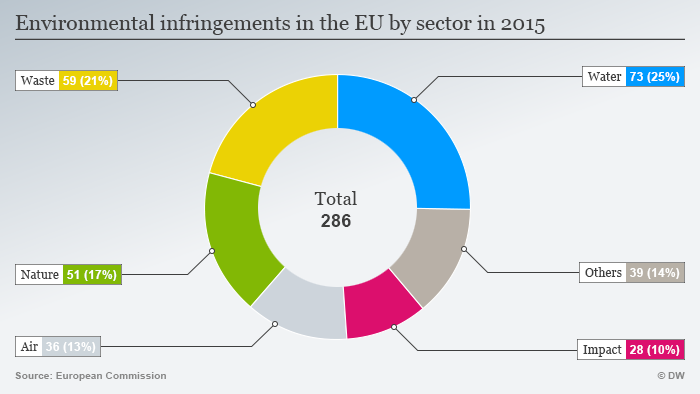 "But as soon as the Commission threatened to withdraw regional aid, the Greek government paid the penalty and closed the toxic waste dump," says Szafraniuk.

The commission sent Poland two warning letters - as it is obliged to do - before referring the case to the high court earlier in 2017. If the court confirms that EU law is being violated, the country has six months to comply. If it doesn't, it can be assessed either a lump sum penalty or a daily fine until the situation is resolved.

Each country has a different minimum fine that it must pay, based on its economic and demographic situation. Poland's minimum lump sum amount is 4.2 million euros. Germany's, by contrast, is 10 million euros.

If Poland were to be found guilty both of violating the law and the injunction, it would be fined at least 8.4 million euros.

The largest fine ever imposed on a member state was 20 million euros to France in 2005, for failing to carry out controls on its fishing activity as required by EU law. 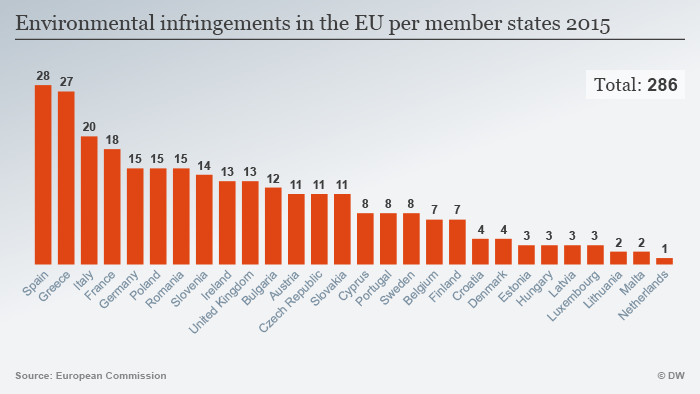 It is rare for a situation to get to the stage of fines. Environmental groups are calling on the commission to be more aggressive with infringement accusations in general.

In the area of environment, most of the violations are related to water and waste law. The longest-running and most notorious environmental infringement is Southern Italy's failure to properly dispose of garbage.

Violations of EU air pollution limits are also a common infringement, and have become a central part of the dieselgate scandal as the German government tries to figure out how to get its cities into compliance without banning diesel vehicles.

Southern Europe has a far-bigger problem with non-compliance than Northern Europe, with Greece, Italy and Spain being the most frequent offenders in the area of environmental law. Despite complaints about EU law in the United Kingdom, the country has actually been quite good about enforcing it.

The most compliant country in the EU in 2015, the last year for which figures are available, was the Netherlands with only one infringement.

Logging in Poland's primeval Bialowieza forest has continued under the pretext of pest control. Yet environmentalists suspect other motives. The EU says the UNESCO world heritage site is under threat. (05.08.2017)

Poland has begun felling sick trees in the ancient, first-growth Bialowieza forest in the country's northeast. Much of this pristine wilderness is a national park and UNESCO heritage site - a rarity in Europe. (25.05.2016)