The European Commission has told Poland that its voting rights in EU-decision making could be revoked in response to far-reaching judicial reforms. Brussels also launched proceedings over a technicality in legislation. 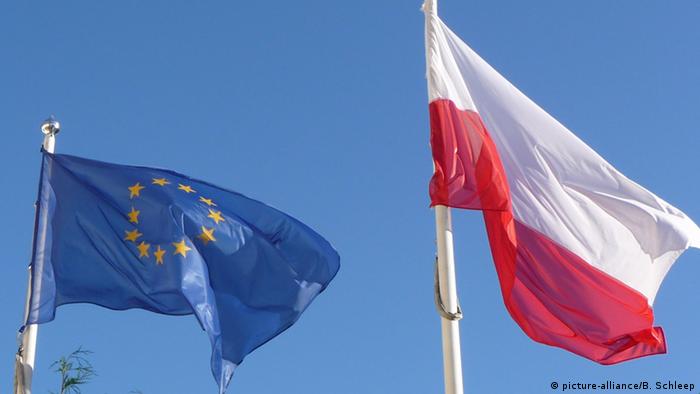 The European Commission said Poland's voting rights in EU decision-making could be suspended - under Article 7 of the EU treaty - if judges in the country's supreme court are removed.

The Commission said that the independence of the Polish judiciary remained of deep concern, even after President Andrzej Duda's unexpected vetoing of two controversial reforms.

Duda on Tuesday vetoed two bills, including one that could see all supreme court judges removed if not approved by the justice minister. The second piece of legislation would allow parliament to name members of a council that would decide on appointments.

The president's decision came after days of protests at the reforms, which critics say is an attempt to extinguish the independence of the judiciary.

Read more: Poland's judiciary conundrum: Where is the resistance?

Duda did, however, sign one bill which allows the justice minister to name the heads of all lower courts, and the ruling Law and Justice Party has vowed to push ahead with the changes.

European Commission Vice President Frans Timmermans told a news conference that Brussels reserved the right to sanction Poland with Article 7, should the changes to the supreme court go ahead.

"In this past week some things have changed in Poland - and some things have not," Timmermans said. "If such a measure is taken the commission is ready to immediately trigger the Article 7 procedure."

Read more: 'Somebody has stolen Poland and its values'

However, the European Commission was still ready to work with Poland to see how the situation could be addressed, Timmermans said.

"The Commission's hand remains extended to the Polish authorities for dialogue, and we welcome any steps to amend these laws in line with our Recommendations," Timmermans said, stressing that Poland could still avoid a formal sanction.

Article 7 is the bloc's "nuclear option" and has never yet been used against any EU member.

Brussels' also said it was implementing proceedings over the bill that was passed into law by Duda. The EU has taken issue with one particular piece of legislation because it introduces different retirement ages for male and female judges, which the Commission claims is a breach of EU anti-discrimination law. The law would see female judges retire at 60 and males at 65.

After days of public outcry, Polish President Andrzej Duda has said he will block two bills to reform Poland's judiciary. However, he endorsed the third one, with the government pledging not to back down on their plans. (25.07.2017)