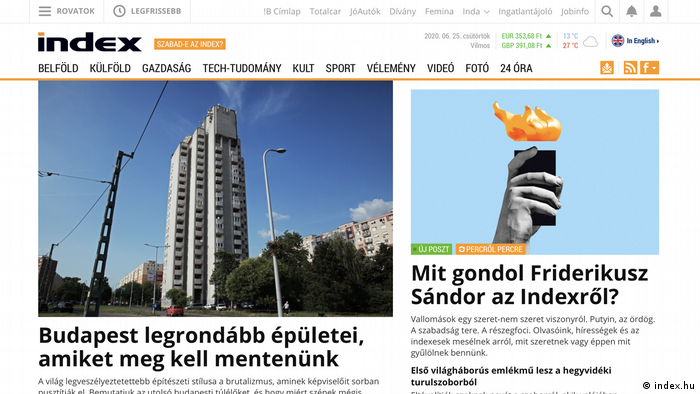 Very few truly independent media outlets are left in Hungary. Most of them only have a limited reach, meaning that the Hungarian Prime Minister, Viktor Orban, can tolerate them. But there is one exception: the news portal Index.

Index is by far the most widely read portal in Hungary. It stands for independent, quality journalism. All of this is very annoying to Orban, his party allies and members of his government, who at times have openly expressed their irritation.

In the past there have been repeated indications from sources close to the government that tricks might be used to exert influence over Index, or at least to tone down its critical line. So far, the portal has managed to withstand them. Now, though, its editor-in-chief, Szabolcs Dull, has sounded the alarm.

"The staff and independence of Index are in grave danger,"he wrote in a statement issued last Sunday evening, signed by more than one hundred of the portal's journalists and employees. 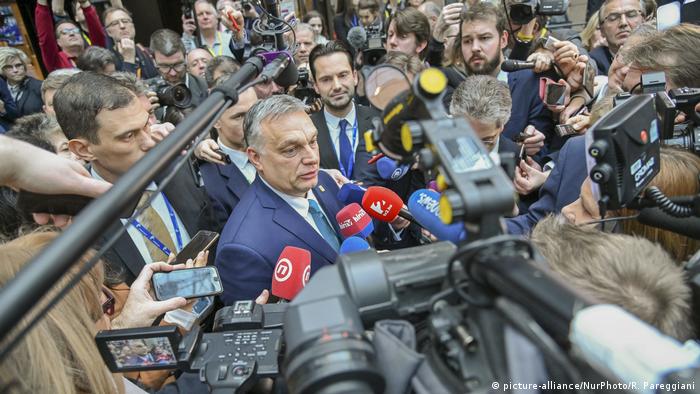 Orban has been working to bring Hungary's media under his influence

Index's editorial office has also moved its "independence indicator" – set up on an external website in 2018 – from green, the level labelled "Independent", to amber, meaning "Endangered." If the indicator were to shift to the red field – "Not Independent" – it wouldn't just mean the end of another Hungarian independent media outlet, but could legitimately be described as the end of press freedom in Hungary.

Index was founded in 1999. Its mixture of well-articulated, informative political journalism, many investigative reports, social reporting, cultural, tabloid, video, and blog content have made it one of the most widely read media outlets in Hungary. The site currently receives around 1.5 million visits a day – in a country with a population of 10 million.

Ownership of the portal has already changed several times in rather opaque proceedings that have made the journalists at Index uneasy. The most recent change of ownership took place just a few weeks ago. At the end of March, the media entrepreneur Miklos Vaszily bought a 50% share in the firm Indamedia, which manages Index's advertising.

Vaszily has already aligned several media companies with the government, including the once-independent portal Origo. Among other things, he is also currently the head of the pro-government broadcaster TV2. There are now fears that Index's advertising revenue could be used as a form of blackmail.

Proposal to dismantle the team

Vaszily has another indirect connection to the current alarm signal from Index's editor-in-chief and editorial staff. An external advisor, rumored to have ties to Vaszily, submitted a proposal to Index's board of executives. It suggested that, to save money, they should dismantle the editorial team and redistribute its employees to several small, outsourced companies supplying Index with media content. For Index, that would be the beginning of the end of independent journalism.

On Monday, Index's chief executive Laszlo Bodolai hurriedly assured people the proposal had been rejected, saying the editorial team's fears were unfounded. However, at the same time he dismissed the editor-in-chief Dull from the board of executives. Neither Dull nor Vaszily provided comment to DW.

However an Index journalist, who asked not to be named, told DW that the fears were "totally founded," that the proposal to break up the editorial team was a "real and very serious crossing of a boundary," and that the independence indicator could only be returned to green if the editorial department were given a guarantee that the plan would be scrapped. 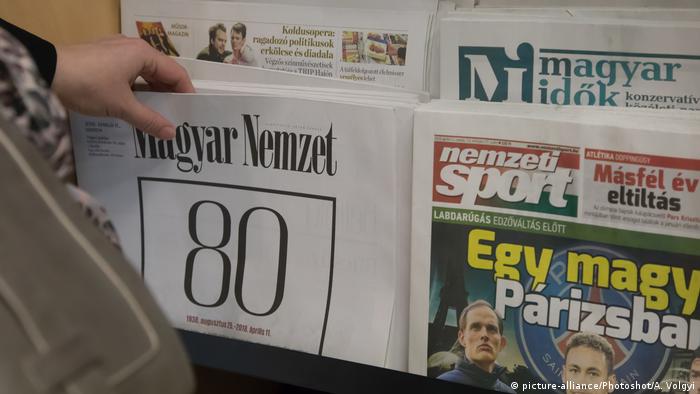 Press freedom has come under increasing threat in Hungary

The Index team's fears are also based on the fact that for the past decade Orban has been using methods like this to redistribute the Hungarian media landscape and bring it under his control. As early as 2010, just a few months after he took power, he had Hungary's entire public media sector dismantled and divided into small entities. During the process, all journalists who didn't conform to the government line were gradually let go.

Advertising revenue is the Orban government's main weapon for putting pressure on privately owned media. They receive almost none of the lucrative state advertising contracts. It's also an open secret that private companies will generally avoid advertising in the independent media, fearing economic disadvantage or harassment by the authorities. Consequently, many media that were once explicitly critical, like the television broadcasters RTL Klub or ATV, are now much tamer.

German businesses and media companies also bear some of the responsibility for the transformation of Hungary's media landscape. They once had a strong presence in the country; however, over the past decade most have withdrawn, making Orban's takeover of independent media easier.

Deutsche Telekom's was a contentious example: In 2015 it sold the large portal Origo, which was critical of the government – allegedly because it wanted to win contracts for the extension of Hungary's broadband cable network. Telekom denies this; it describes the sale of Origo as "streamlining its profile."

Most recently, the Orban government caused a stir with a pro-government media initiative like something from a mafia film. In late 2018, all on the same day, businessmen affiliated to Orban "donated" a total of 476 media titles to a state media foundation – for no official reward.

The Index journalist who asked to remain anonymous says that if the portal is also made to toe the government line, it would constitute a major watershed in recent Hungarian press history and a huge loss for Hungarian society.

Hungarian authorities have halted the flow of state funds to Democratic Coalition, saying it failed to show "a reliable and clear picture" of its finances. The party says the requested papers burned in a 2018 fire. (21.05.2020)