Can Amy Gutmann reset the US-German relationship? | Germany | News and in-depth reporting from Berlin and beyond | DW | 09.02.2022 Amy Gutmann may just be the much-needed breath of fresh air to revive the trans-Atlantic ties between the United States and Germany. The 72-year old, who still has to be sworn in, will be the first woman to fill the position and brings a very different background and style to the job compared to the abrasive nature and impetuousness of her predecessor, Richard Grenell.

Berlin has been without a US ambassador for 18 months, after Grennell resigned from his position in June 2020. Since then, Deputy Chief of Mission Robin Quinville has acted as the charge d'affaires and fulfilled the role of the ambassador.

Throughout her academic career, Gutmann has sought to reconcile theory and policy to promote the values and ethics of a civil democratic society. Her impact has been such that Fortune magazine named Gutmann one of the "World's 50 Greatest Leaders" in 2018.

Her background provides an idea of her focus and ideals. During her tenure as provost and Laurance S. Rockefeller University Professor of Politics at Princeton University, she founded Princeton's ethics center, the University Center for Human Values.

Under former President Barack Obama, she served as chair of the Commission for the Study of Bioethical Issues. She has written extensively on the value of education and deliberation in democracy, on "the good, the bad and the ugly" of identity politics, and on the role of ethics in public and political affairs.

Against this backdrop, US President Joe Biden's decision to tap her as ambassador was seen as evidence of his intent to follow through with his doctrine of shoring up the support of democracies around the world.

"The democracy focus of her academic work indicates that Biden is serious about his endeavor to rally democracies, particularly in Europe, around a more antagonistic China policy," Julian Müller-Kaler, a project officer on the Americas program at the German Council on Foreign Relations and senior and resident fellow at the Atlantic Council, told DW via email.

Gutmann has strong ties to Biden. In 2017, she opened the  Penn Biden Center for Diplomacy and Global Engagement in Washington, D.C., which serves as a hub for diplomacy, foreign policy, and national security dialogue.

While she will have to prove her diplomatic and foreign policy credentials on US-German issues, her personal background is very much tied to Germany. Her father, Kurt, grew up in an Orthodox Jewish family in the Bavarian city of Nuremberg. He was a student there when Adolf Hitler came to power and fled Nazi Germany with his family in 1934, first to India before eventually settling in New York where Gutmann was born.

She told The Daily Pennsylvanian, the university newspaper, in 2013 that her father's experiences in Nazi Germany had had a "profound influence" on her. "It's true that his whole family would have disappeared from the face of the earth had it not been for what he did."

Much has been made of the need for a reset in the countries' trans-Atlantic relationship which is still tarnished by the legacy of the Trump era. Biden has made it clear that the US is back on the trans-Atlantic scene and wants to reboot those ties. The question is whether Gutmann can pick up the baton and push on with that. 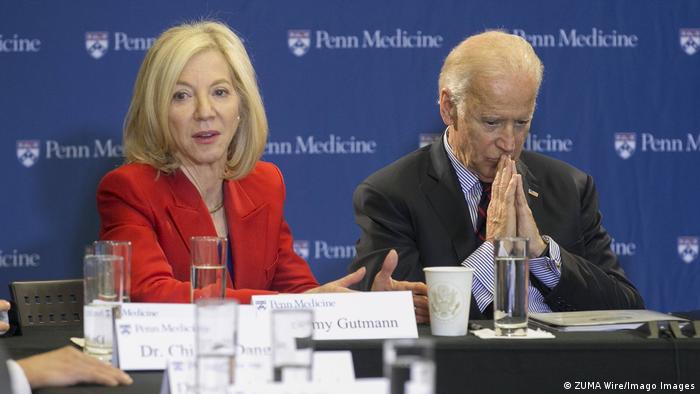 A new era for the trans-Atlantic relationship?

"Gutmann represents the Biden administration and is close to Biden," Sudha David-Wilp, the deputy director of the German Marshall Fund in Berlin, told DW.

Still, the matter of rebuilding trust is not going to be an easy one, she said. "The issue is with public opinion in Germany about trust in the US. And that's where the next ambassador is going to have to roll up their sleeves and get to work to show Germans that the United States considers Germany an important partner. There are things that will not be like they were before, but the trans-Atlantic relationship is important to Europe's and the United States stability."

There are a number of contentious foreign policy issues that Gutmann would need to address swiftly and even if she may not be steeped in diplomatic experience, she has the "intellectual capacity to be a great representative," said David-Wilp.

Biden, like his predecessor, has been critical of Germany's involvement in the planned Nord Stream 2 gas pipeline from Russia. Gutmann will also have her work cut out for her on other thorny issues. "First and foremost, there's still the issue of tariffs between Europe and the US. And then, of course, there's the issue of China that has the potential to bring us together to work hand in hand but also has the potential to divide us," said David-Wilp.

According to Müller-Kaler, the China question will remain at the forefront of the trans-Atlantic relationship. "Despite recent tensions, Berlin is still favoring a less ideological and more pragmatic China policy that opposes the idea of democracy vs. authoritarianism."

Gutmann, he says, will have to walk "a fine line between repairing relations, address existing disputes, and solicit Germany’s support for Biden’s policies," said Müller-Kaler.

This piece was updated on February 9 to reflect Amy Gutmann's confirmation by the US Senate.

If confirmed by the Senate, Amy Gutmann will be the first woman to serve as US ambassador to Germany. The daughter of a Holocaust survivor, she is currently president of the University of Pennsylvania.

Germany's Trans-Atlantic Coordinator: We can build a 'New West'

If confirmed by the Senate, Amy Gutmann will be the first woman to serve as US ambassador to Germany. The daughter of a Holocaust survivor, she is currently president of the University of Pennsylvania.

"Maverick" retired colonel Douglas Macgregor was foreseen as US ambassador to Berlin by Donald Trump. Instead, says the Pentagon, he's to become a key adviser to the incumbent president's replacement defense secretary.