Can Algeria contribute to the EU′s energy security? | Business | Economy and finance news from a German perspective | DW | 04.05.2022

Can Algeria contribute to the EU's energy security? 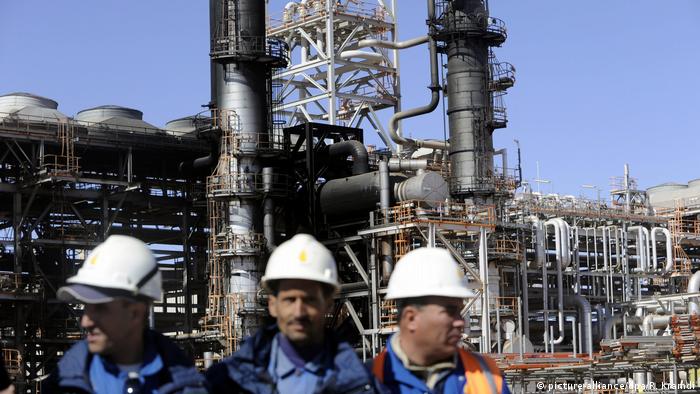 As the EU is diversifying away from Russian natural resources, the Mediterranean is emerging as one of the most important regions for the bloc's energy security. In the southern part of the Mediterranean, oil and gas reserves are plentiful. Around 10% of the EU's imports come from Algeria.

Last month, Italy's oil and gas company ENI used its ties and signed deals to import LNG from Egypt and an extra 9 billion cubic meters (bcm) of piped gas per year from Algeria. The two North African countries hold the largest proven gas reserves in the area, even ahead of Libya.

The EU, well aware that it cannot depend on just a couple of suppliers, understands that the two countries will be central to, but not a silver bullet for its energy security.

Hydrocarbon fields and infrastructure require more than a year to develop, whereas the most critical moment for Europe is expected to come during the next heating season.

"The region is currently unable to fully provide a substitute to the volumes imported from Russia, at least when it comes to oil and gas, but can make important contributions if producers fully leverage existing infrastructures, like LNG terminals in Algeria and Egypt, pipelines in Algeria and Libya," Nadim Abillama, Middle East and North Africa (MENA) program officer at the International Energy Agency (IEA), told DW.

"There is a reasonable chance that Europe's energy needs might give Algeria some leverage to play European countries off against each other on the basis of their political and economic concessions and positions on the Western Sahara issue, which has been recently reigniting," Marco Giuli, a researcher at the Brussels School of Governance, told DW.

Yet, Algeria's recent decision to sign a deal with Italy ruffled some feathers in Spain. Experts see the revision of Spain's Western Sahara policies as a reason for the decision. In November, Algeria closed one of the two pipelines bringing gas to the Iberian Peninsula because of tensions with Morocco. Others sensed a good deal of opportunism on the Italian side.

Despite the different interpretations, one aspect is undeniable: Exporting countries can choose their partners and offer additional gas as part of a broader collaboration, which will also include political and technological aspects.

Ghiles, a former Financial Times North Africa correspondent, explains that France, Japan, and the US too played a role in the country's oil and gas industry and will continue to do. Germany is another potential key player.

"Germany has a reputation for being reliable in Algeria, going back to tractor and motor plants it built back in the 1970s," Ghiles noted. " As tectonic plates in energy move, it might be the right time for Germany and Algeria to restart a conversation on gas and renewable energy," he suggested.

But Algeria is not the only country in focus. The Eastern Mediterranean region is experiencing significant changes — with the US-sponsored reintegration of Turkey into the regional energy system in recent months, and momentous discoveries off the coasts of Israel, Cyprus and Egypt during the last decade.

Fragmentation of the Mediterranean remains a problem in the regional energy sector. Still, one lesson can be drawn: Cultural proximity, long-standing ties and mutual understanding are valuable diplomatic assets, which will help maximize the Mediterranean's contribution to EU energy security.

Algeria is among the top 11 countries in terms of proven gas reserves. According to data by the US Energy Information Administration, Algeria sits on the third-largest recoverable shale gas resources after China and Argentina.

US companies see opportunities in shale gas cooperation in the country, while Germany eyes renewable projects.

As part of the German-Algerian Energy Partnership, German development agency GIZ has been tasked with investigating the country's green hydrogen potential.

"In 2021, GIZ presented a study on the potential of Power to X technologies in Algeria by 2050," a spokesperson told DW.  "According to the study, the country can produce a lot of electricity from solar energy that is needed for the production of green hydrogen."

Power-to-X is an umbrella term for a number of energy conversion and storage pathways that use surplus electric power from renewable energy, typically solar and wind.

GIZ explains that Algeria is also in a good position to harness its oil and gas expertise and its gas pipelines, which could transport hydrogen following some technical adjustments.

EU investments in green projects in the region could also increase electrification domestically, which would imply lower gas consumption in the region and higher profits from exports.

The International Energy Agency notes that the development of renewables requires significant private sector investment, which in turn would put pressure on Algeria to ensure an attractive investment environment. Some regulatory changes have been made, including reforms to incentivize foreign ownership of Algeria-based companies.