Can a deposit system help reusable coffee cups catch on? | Environment | All topics from climate change to conservation | DW | 31.01.2017

Can a deposit system help reusable coffee cups catch on?

Some 320,000 disposable cups are thrown away every hour in Germany. Reusable cups have long been touted as the solution. But will they ever catch on? With clever financial incentives, perhaps yes. 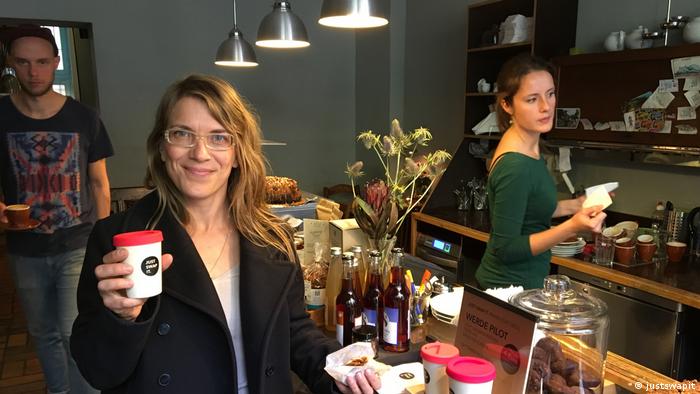 The active service life of a disposable coffee-to-go cup is about 15 minutes. Once it's over, it gets chucked into a dustbin, or onto the street or into some bushes. This daily phenomenon plagues cities everywhere. It entails significant on-going clean-up costs, and it's an eyesore. Disposable plastic cups are an extra-big problem - their remains can last indefinitely in the environment.

According to data from Deutsche Umwelthilfe (DUH), a German environmental organisation, almost three billion cups land in the trash in this country every year. On average, each of Germany's 82 million people uses 37 cups a year, and the production of plastic cups or plastic-sheathed paper cups causes CO2 emissions of more than 100,000 tonnes per year in Germany.

Public discomfort about disposable cups is increasing. Consumers, café operators and cities are looking for solutions.  People often bring their personal cups along on the morning commute to work. More and more canteens, bakeries and cafés are now offering reusable cups as an alternative to disposables. 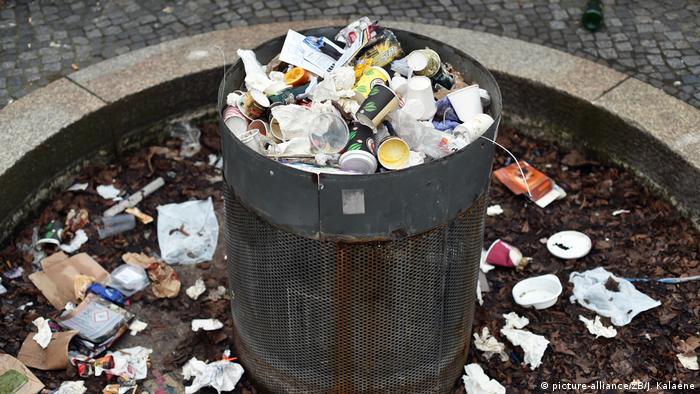 Overflowing rubbish bins like this one, photographed in January 2015 in Berlin, are an all-too-common sight

The city of Berlin is now preparing to attempt a great leap forward: soon, coffee consumers in Berlin will be able to enjoy their coffee-to-go from a refillable cup supplied by coffee retailers. You have to pay pay a deposit, which will be quickly and easily refundable when the cups are returned to participating retailers.

The Berlin administration's proposal for the introduction of a multi-use returnable cup system is now being discussed by its Environment Committee. The initiative is scheduled to be voted on within the next few weeks by the city's municipal parliament.

"We see a clear trend in the direction of reusable cups, starting with small initiatives in cafes, projects at German universities or with the Berlin S-Bahn. The decision by the city's politicians paves the way for a multi-reuse future," said Stefanie Otterstein of DUH. 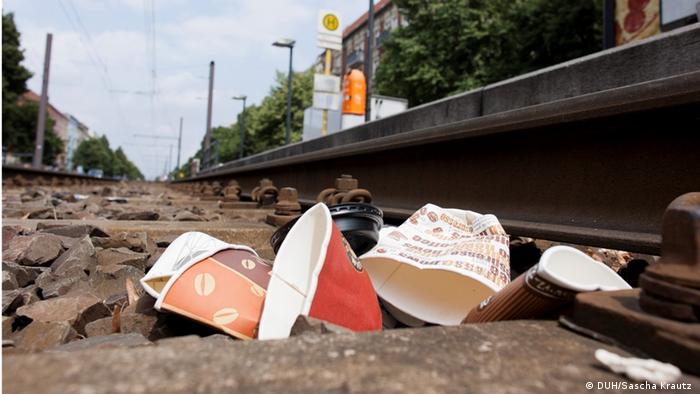 About 3.8 million disposable paper or plastic cups are thrown away in Germany each day - more than a few of them become litter

Cheaper for both consumers and retailers

Every year around 2,400 tonnes of coffee-to-go cups are produced in Berlin. Berlin's policy initiative aims to support a shift from disposable to reusable cups with incentives: a discount of at least 20 cents on the retail price of a cup of coffee, for consumers who use reusable rather than disposable cups.

If it succeeds, the measure will have a double benefit: it'll be better for the environment, and it will save the government money on cleanup costs for parks and public places.

It's an echo of the deposit system on many glass and plastic bottles that has been in place in Germany for many years.

A pilot project in Berlin called 'Just swap it' has already generated encouraging early results. The initiative's organizers developed a reusable mug made of bamboo, cornstarch, and synthetic resin, which is lent to customers in participating Berlin cafés for a 4 euro ($4.32) deposit. The customers can take the cup with them, and give it back at other cafes. 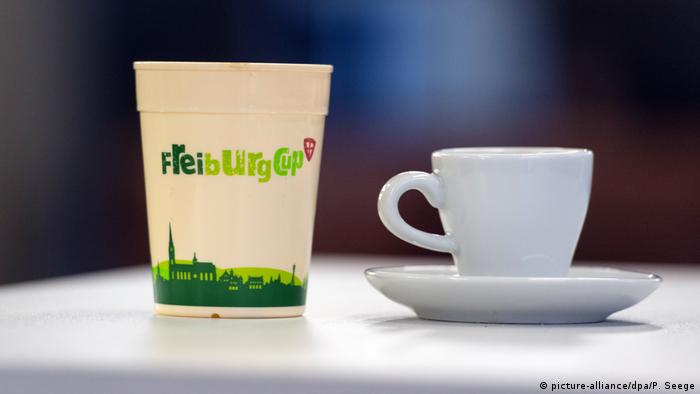 Freiburg has its own reusable, refundable coffee cups (on the left)

"The mugs are catching on," project manager Ulrike Gottsauk told Deutsche Welle. "Our goal is responsible consumption with a good feeling. We don't want to point our fingers at consumers and induce a guilty conscience."

According to Gottschau's data, reusable cups and the deposit system also make financial sense for cafés: a plastic cup including lid costs coffee sellers about seven cents, whereas the cost of washing reusable cups is less than half that amount.

Other German cities want to promote the use of reusable cups too. In Freiburg's city center, the reusable "FreiburgCup" has been available in cafés and bakeries since last November.

Freiburg was the first city in Germany with a multiple-reuse cup deposit system. "We want people to produce less waste and throw fewer coffee cups onto the streets," says Gerda Stuchlik, Freiburg's mayor. The city's quarter of a million residents currently go through about twelve million disposable cups annually.

Ghana is swimming in plastic waste. Should the government introduce a plastic ban? In a guest commentary by climate advocate Joshua Amponsem, he speaks to Ghanaian activists about the future of plastic in the country. (13.01.2017)