British PM David Cameron has said the UK will provide settlement for "thousands more" Syrian refugees. The pledge stretches only to Syrians currently in UN-sponsored refugee camps, however. 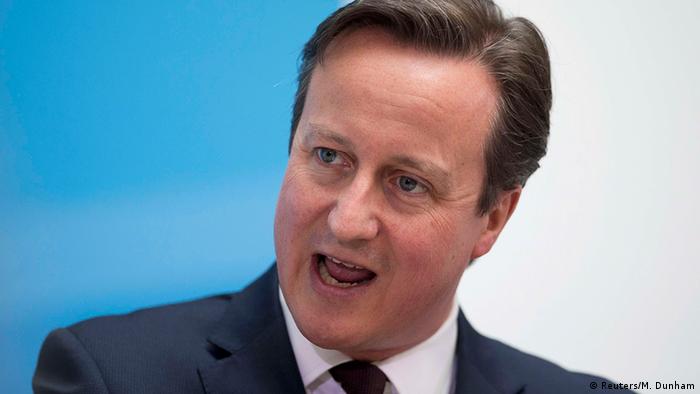 The announcement on Friday came hours after Antonio Guterres, the United Nations (UN) High Commissioner for Refugees call on EU member states to admit up to 200,000 refugees as part of a "mass relocation program."

Speaking in Lisbon on Friday, where he was due to meet with his Spanish and Portuguese counterparts, Cameron said the UK would accept thousands more Syrians directly from UN-sponsored refugee camps, citing the "scale of the crisis and the suffering of the people."

There was no word from the prime minister, however, about the UK accepting any of the tens of thousands of refugees, currently stranded in other EU member states.

"We will continue our approach of taking them direct from Syrian refugee camps," Cameron said, adding that the British government would announce more details next week.

Calls for UK to step up

The PM's comments on Friday came as somewhat of a u-turn after he previously suggested that the refugee crisis couldn't be solved by Britain taking in more refugees.

Over the past four years, the UK has accepted around 5,000 Syrian asylum applications. Other EU countries - most notably Germany - have been urging Britain to do more, however, as the refugee crisis continues to grow.

Cameron is also facing increasing pressure back home with more than 350,000 people having now signed an online parliamentary petition, calling for the UK to "accept more asylum seekers and increase support for refugee migrants." The appeal will be considered for debate in Parliament next week.

Stand off in Hungary

Tensions continued to mount in Hungary on Friday where hundreds of frustrated refugees were locked in a stand of with police for a second day. Authorities in Budapest have prohibited the refugees from boarding trains to Austria and Germany where they hope to seek asylum.

A group of refugees, vowing the reach Vienna by by foot, was growing in numbers into the afternoon.

European Union foreign ministers were also due to meet in Luxembourg on Friday to discuss refugees' countries of origin and transit.

The talks could initiate a change in the Dublin rules, which stipulate that a refugee register in the country of entry into the European Union.