Cairo and Kremlin agree on building a nuclear power plant

Officials from Egypt and Russia have signed agreements to boost economic and industrial ties during Putin's visit to Cairo. The two countries plan to build a nuclear power station, Egypt's President El-Sissi says. 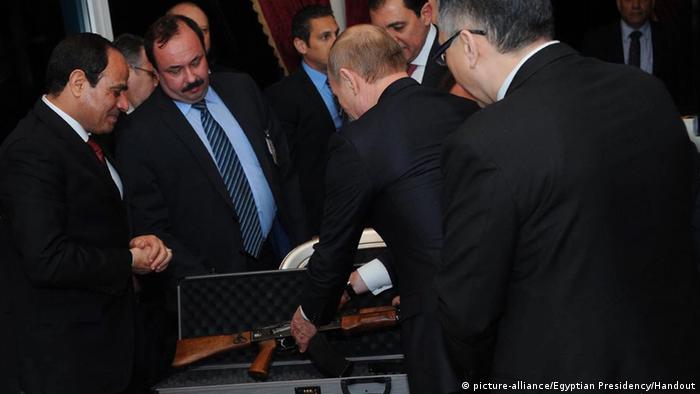 Russia's president, Vladimir Putin, wrapped up his two-day visit with Egyptian counterpart Abdel-Fattah el-Sissi in Cairo on Tuesday, after both countries signed a memorandum of understanding to build Egypt's first nuclear power plant together. The power plant is expected to be made with the latest technology and have four separate blocks providing 1200 megawatts of energy each, according to Sergey Kirienko, the director general of the Russian atomic energy corporation Rosatom.

President Putin stressed that "if definite decisions are made, it would not be simply about building a nuclear power plant, but about creating a whole new nuclear industry in Egypt."

He also stressed that Moscow had only signed a memorandum of understanding on the construction, meaning that the deal had not yet been finalized.

President Abdel-Fattah el-Sissi said that the two nations also signed agreements to improve the natural gas business and investment as well as to create a Russian industrial zone along the Suez Canal.

The future power plant is to be built in northern Egypt, close to the Mediterranean coast.

During his first visit to Egypt in a decade, Putin was received with a guard of honor and a 21-gun salute, with posters of himself plastered along Cairo's main roads greeting him in Russian, Arabic and English.

The visit comes at a moment when Russia faces international isolation from the West over the Ukraine crisis. At the same time, Cairo's relationship with its key ally Washington remains cooler than usual. The US government often criticizes El-Sissi for his sometimes violent treatment of political opponents, especially the supporters of former President Mohammed Morsi, who was ousted in the summer of 2013.

In a reference to Cairo's clashes with jihadist militants and Morsi's Muslim Brotherhood, El-Sissi said Putin's visit also showed Russia's "solidarity with Egypt in its war against terrorism."

"We agreed that the fight against terrorism cannot mean just confronting it in the security field, but must also reach its ideological roots," the Egyptian president added.

"Putin continues to take advantage of ambiguity and contradictions in Western policies toward the Middle East," said Anna Borshchevskaya of The Washington Institute for Near East Policy.

As long as Washington criticizes "Egypt's democratic backslide... it keeps open the door for Putin... to gain influence in Egypt at the expense of US interests," the expert on Russian policy in the Middle East said.

On the last day of his visit, Putin said he expected there would be a new round of talks on Syria in Moscow, following a meeting of representatives from both the Syrian government and the Syrian opposition in the Russian capital last month.

"We look forward ... to the next round of such talks, which ultimately I hope will lead to a peaceful settlement of the situation in Syria," Putin said.

Egypt has set February 12 as date for the retrial of two jailed Al-Jazeera journalists. The case has been widely dismissed by human rights and media freedom groups as a sham. (08.02.2015)