'Burning a flag is like burning one's own integrity,' says Israeli ambassador to Germany

Protesters who burned Israeli flags in Germany over the weekend represented a minority view and should be condemned, Israel's ambassador to Germany, Jeremy Issacharoff, told DW on Tuesday.

Over the weekend, thousands of demonstrators gathered in Berlin to protest US President Donald Trump's decision to recognize Jerusalem as Israel's capital city. Images showed some protesters burning flags or other material adorned with the Star of David, a symbol of Judaism and the state of Israel.

"It made me feel very sad to see such an event in Berlin … a city that welcomed me almost four months ago in such a warm way," he said. "I'm sure it doesn't represent the feelings of the German government and the German people as a whole." 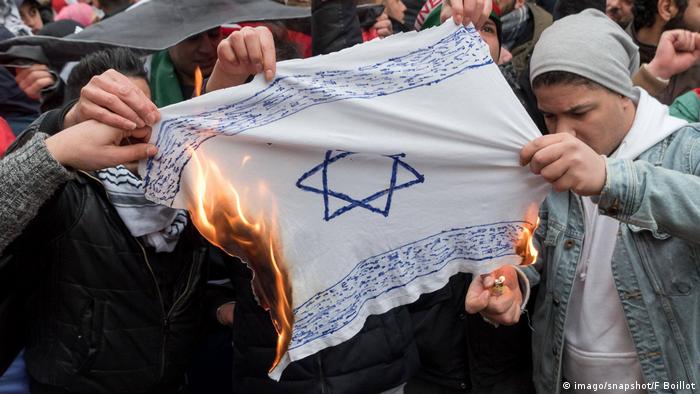 Calling the perpetrators a "fringe element," Issacharoff said: "It's not that they disagree with Israel's policy, but they don't agree with the fact that Israel can have a position."

"The burning of a flag is like burning one's own integrity and one's own tolerance," he said. "It is something that should be condemned in a very profound way."

Jerusalem will be part of final peace deal

Asked about Trump's plan to move the embassy to Jerusalem and thereby recognize the city as the Israeli capital, Issacharoff said that any final peace deal between Israelis and Palestinians would include Jerusalem as the capital of Israel.

Asked whether Israel would accept a two-state solution with East Jerusalem as the capital of a future Palestinian state, a demand repeatedly made by Palestinian negotiators in previous peace talks, the ambassador said: "I think that we should ... appreciate that there is a lot more potential for coexistence in this city."

He also said the city would remain open to people of all faiths: "There will be no change in the present, very steadfast policy of freedom of access [and] freedom of worship in Jerusalem."

Trump did not jeopardize final settlement

Issacharoff believed Trump did not intend to undermine a final peace deal. "In no way did he try in his words to prejudice a final settlement," he said.

He also suggested other Middle Eastern countries follow Egypt and Jordan in signing peace accords with Israel. "This can also happen with the Palestinians," he said.

Issacharoff warned leaders throughout the region against denying the Jewish identity of Jerusalem, saying: "We also have a stake in this enterprise."