After 39 straight seasons in the top-flight, one of the Bundesliga’s founding members and Germany’s most storied clubs are teetering on the edge of relegation. How did it come to this for Werder Bremen? 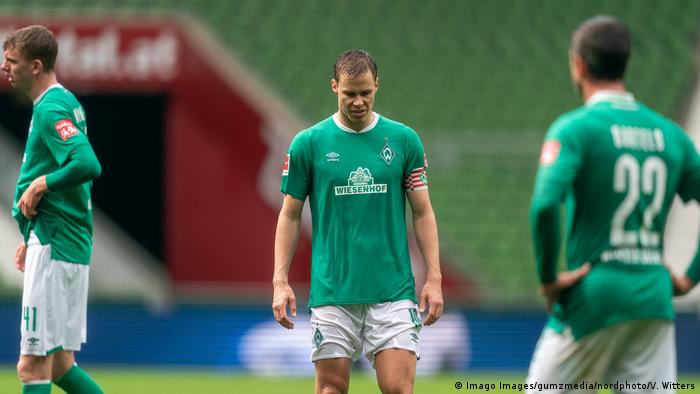 By the time referee Bibiana Steinhaus blew time on Werder Bremen's latest must-win game against Wolfsburg, the blue skies over Bremen had given way to a thunderstorm and torrential rain. It was an appropriate metaphor for Bremen's dramatic plight, which now seems irreversible.

Wout Weghorst's late winning header for Wolfsburg felt like a defining moment. Bremen's defense parted obligingly, as it has so often done this season, and Weghorst was left with the kind of chance that he wasn't going to miss. Once again, a basic defensive error had led to defeat and Bremen are now six points adrift with four games to play.

"The disappointment is really large but the fighting spirit remains," said Bremen coach Florian Kohfeldt, who was putting a brave face on a grave situation. 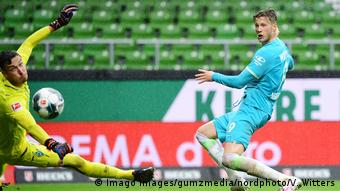 Bremen's performances have been spectacularly bad at both ends of the field. They have gone 13 hours without scoring a home Bundesliga goal – and have suffered badly in attack.

One of the few bright sparks, Milot Rashica, was injured on Sunday, but he hasn't scored a league goal since December and in truth, Bremen's problems are beyond being saved by one player.

The absence of deep-lying striker Max Kruse has been noticeable. Josh Sargent has not yet delivered on his promising young talent. While midfield motor Maximilian Eggestein, in the Germany squad just last year, hasn't scored a single goal all season and assisted just twice. For all the individual promise of Bremen's young players, inexperience is not what you need in a relegation dogfight.

A chronic lack of confidence has seen Bremen get stuck in a rut, and bad luck has kept them there, but the problems run deeper for the team that has scored the fewest (30) and conceded the most (63) in the league this season.

The decision by sporting director Frank Baumann to give Claudio Pizarro a two-year contract at the age of 39 now appears bold. Davie Selke was brought in on loan in January to fire Bremen to safety, but he has failed to make the desired impact, as have fellow loan signings Omer Toprak and Kevin Vogt. To be fair, when Selke arrived in January the team were already on a run of one win in 13 games.

Then there is the decision to stick with Florian Kohfeldt. Clubs should be applauded for keeping faith with their coach in testing times and Baumann could have fired the 2018 coach of the year at several points during this disastrous season. While others chose to twist rather than stick – Cologne for example – Bremen stood by their man. With four games to go though, both Bremen's Bundesliga status and Kohfeldt's reputation are on the line. 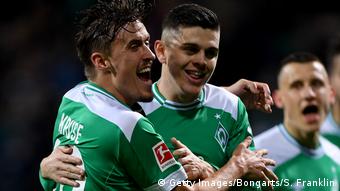 Max Kruse's absence in the team has been noticeable

Bremen haven't been competing at the top of the Bundesliga for a while but finished a respectable eighth last season and seemed to be heading towards European football under Kohfeldt. That was, after all, the goal that Baumann declared in the summer of 2018.

Many great players have pulled on the famous green shirt in the club's 121-year history. Rudi Völler, Miroslav Klose and Mesut Özil all plied their trade at the Weserstadion, and beyond great players it's easy to forget that just over a decade ago Werder Bremen were Bundesliga champions.

The fact that this nightmare is unfolding without any fans to support them makes it even more painful but a perfect storm of bad luck, poor decisions and terrible form has swept Bremen away. They now have four games – against Paderborn, Bayern Munich, Mainz and Cologne – to reach calmer waters and do what their northern rivals Hamburg could not.