Claudio Pizarro is the German league’s oldest-ever goalscorer and will retire at the end of the season. But the 41-year-old striker tells DW that he's still hungry for more as he chases a Bundesliga milestone.

Claudio Pizarro's eyes light up, he smiles and chuckles a little as he relives his first goal in Germany's top flight. After all, it's been over 20 years since the striker first discovered the feeling of scoring a Bundesliga goal.

Back then, Bremen's Weserstadion still had a running track surrounding the field. A baby-faced Pizarro played his first full 90 minutes on German soil — a far cry from his bearded look of 2019.

But even with over two decades of professional football under his belt, some things remain the same for the Peruvian striker.

"The feeling of scoring a goal hasn't changed one bit," Pizarro said in an exclusive interview with DW. "My first goal in Germany was very special but I think all goals are important, especially now that I need three more to reach 200."

Pizarro, 41, is just three goals shy of 200 Bundesliga goals, but he talks about football and sets objectives with the same passion he did when he first started. You can still sense his boyish enthusiasm for the game.

"I'm confident I can break the 200-goal mark," he said. "I'm working towards it and hope I'll find the back of the net in the upcoming weeks."

While three goals may seem like a straightforward task for a man of Pizarro's caliber — he has averaged more than 14 goals a season — the Peruvian has only amassed a total of 67 minutes in nine league matches this campaign. 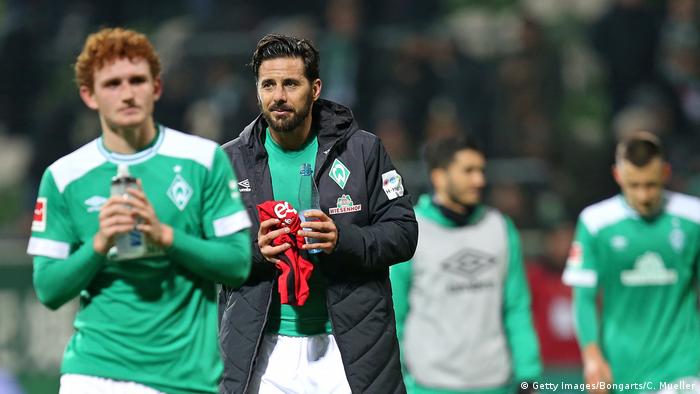 But surely a striker with such high standards and lofty ambitions can't end his career without achieving his target?

"Are you waiting for me to say that I'll stay one more year?" jokes the Peruvian. "No, I don't think so. It's very unlikely. I've already made up my mind. Something incredible needs to happen to change that."

Handing over the baton

Bremen have turned to 19-year-old Josh Sargent to lead their attack this season, and the young American is beginning to blossom. To put things into perspective, Pizarro already had seven Bundesliga goals to his name before his successor had been born. However, Pizarro understands that the club must look to the future.

"I'm on my way out and he's just getting started," said Pizarro, .

"I try to help him out with my experience. I try to guide him so he can avoid the mistakes I made. That way, he doesn't use up much time to develop in the best way he can," Pizarro added, 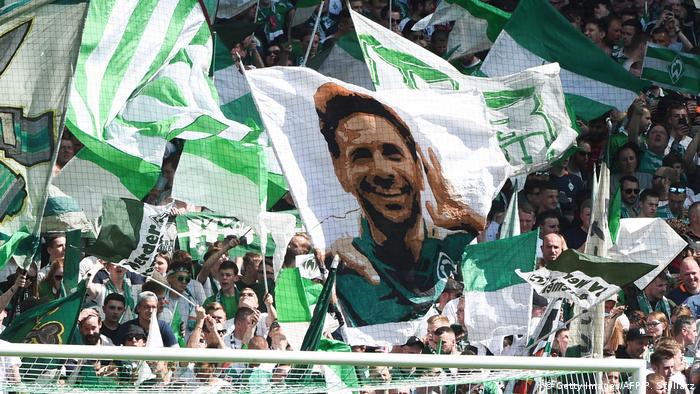 Pizarro is adored by the Werder Bremen faithful, having scored 109 league goals for the club

While Pizarro is willing to share the lessons of his vast experience with the next generation, he is reluctant to take what would appear to be the next natural step in the career of a man with his resume: coaching.

"I would be a very intense coach," says Pizarro. "When I decide to do something, then I do it to the best of my abilities. In order to be successful as a coach, you need to invest a lot of time and that's what I'm trying to avoid for now."

Learning from the greats

Pizarro has had four stints at Bremen, but it was at Bayern Munich where he won it all. He was part of the team that won the treble in 2013, winning the Bundesliga, the Champions League and the German Cup during a season of extraordinary success.

The Peruvian international racked up 87 league goals in two spells with Bayern. He also spent two seasons under Pep Guardiola, a coach known for his intensity.

"When players understand what Pep Guardiola wants, football becomes much easier for the whole team," says Pizarro. "He's intense though. Pep is all about details and that's what makes the difference. When it comes to top level football, those small details are what make difference between winning or losing."

Pizarro's Bundesliga career has been packed with highlights and records. The veteran has won the Bundesliga title six times with Bayern and is at the top of Bremen's all-time scoring charts with 109 league goals. And while the clock is ticking on his career, he's determined to make every game count.

Sancho and Sargent get teenage kicks

Opinion: Schalke under David Wagner are greater than the sum of their parts

While Lucien Favre is failing to get the most out of an expensively-assembled Dortmund squad, the opposite is true of Schalke. DW's Matt Ford says the Royal Blues are heading in the right direction. (26.10.2019)