Hamburg SV have been relegated from the top flight for the first time since the Bundesliga's creation in 1963. Hamburg's 2-1 home win against Mönchengladbach wasn't enough, as Wolfsburg defeated Cologne. 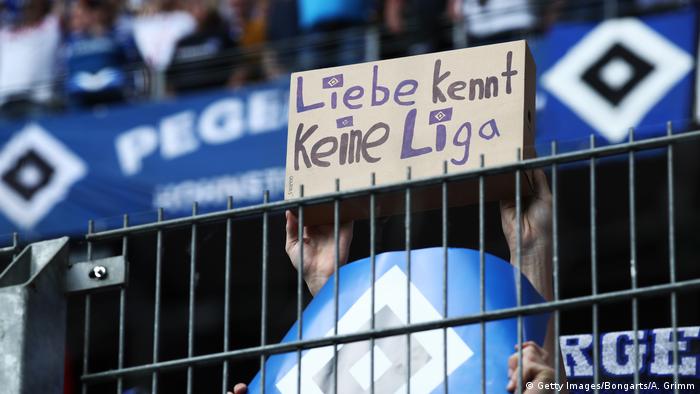 Hamburg SV's record of being the only ever-present team in the German Bundesliga top flight came to cruel end on Saturday.

Despite beating Borussia Mönchengladbach 2-1 in the last game of the season, Hamburg needed already relegated Cologne to defeat Wolfsburg to have any chance of surviving.

That good fortune never looked like coming, however, with Wolfsburg running away 4-1 winners. The Wolves will now face a relegation play-off against the third-best from the second Bundesliga flight, Holstein Kiel.

Hamburg had taken an early lead through Aaron Hunt before Gladbach's Josip Drmic levelled the score just before halftime. HSV went in front again just after the hour mark through a curling strike from Lewis Holtby.

Even after going down to 10 men following Bobby Wood's dismissal in the 71st minute, Hamburg continued to hold on, hoping for a miracle that ultimately never came.

"This is an extremely painful moment for the entire Hamburg SV," said club President Bernd Hoffmann. "The club has lost one of the things that makes it unique." 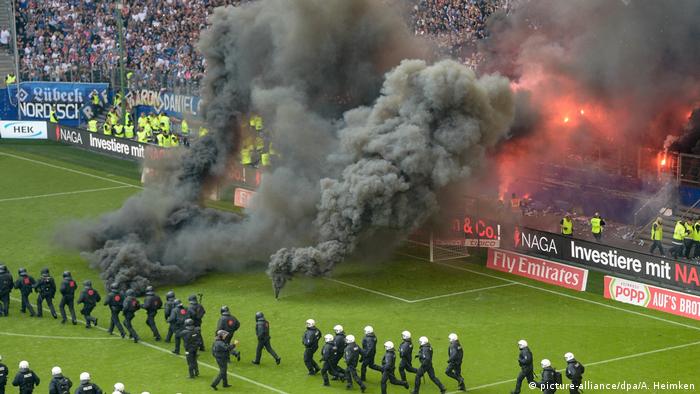 Once it became clear HSV's hopes of survival had vanished, fans responded angrily by launching flares onto the pitch. Officials halted play for 15 minutes as riot police scrambled to maintain order.

Hamburg's Bundesliga farewell match was marred by crowd trouble late on, as supporters threw flares onto the field as it became clear they were heading for the drop. As a huge plume of black smoke rose out of the stadium, authorities were forced to halt the match just minutes from time. Dozens of riot police, including several on horses, charged onto the pitch and lined up in front of the Hamburg fans.

Most fans reacted with anger to the disturbances, chanting "We are the people of Hamburg and you're not!" and "Get them out!"

Play resumed 15 minutes later, if only for the referee to blow the final whistle and confirm Hamburg's relegation.

Several HSV fans, as well as a handful of players, broke down in tears at the end. The northern club's famous stadium clock that showed the clubs 54 years and 260 days in the top flight will now have be reset.

The writing was already on the wall for the six-time German champions, after last week's 0-0 draw against Mainz. After the final whistle, HSV supporters booed and chided their players, with chants of "Relegated, relegated!" ringing through the Volksparkstadion.

Two seasons ago, Wolfsburg beat Manchester United and Real Madrid in the Champions League, but now the Wolves are in another battle to preserve their Bundesliga status. With two games remaining, the club is in turmoil. (03.05.2018)

Whether they are hanging up their boots or simply seeking a new challenge, Bundesliga clubs are known for giving their departing players a warm send-off. Here's a look at who is saying farewell this summer. (05.05.2018)