Karim Bellarabi made history by scoring the 50,000th goal in the Bundesliga as Leverkusen swatted aside Augsburg 3-1 on Friday. Javier Hernandez grabbed a brace as Roger Schmidt's men ended talk of a crisis. 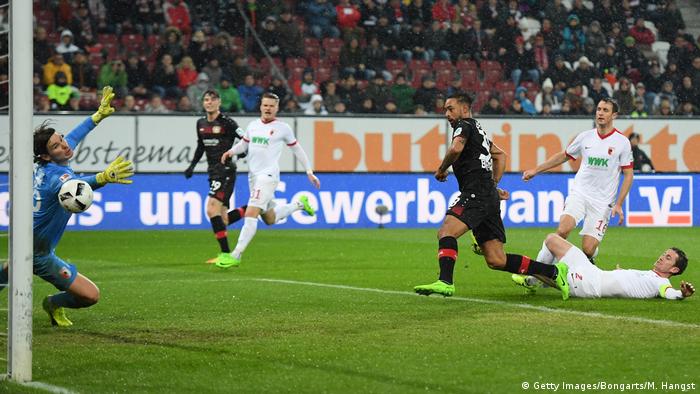 What a difference a couple of weeks make. Bayer Leverkusen coach Schmidt was in big trouble at the start of the month with rumors beginning to swirl about his future. But two wins on the bounce have silenced the doubters for now and his team even hit the headlines by making a little bit of Bundesliga history.

It was a real end-to-end game in the pouring rain in Bavaria but the visitors always looked to have the edge and it was no surprise when they took the lead.

Bellarabi, badly missed by Leverkusen during his injury layoff, finished off a fine move after Augsburg had given away the ball and the visitors quickly pounced

The winger slotted home first time from Kai Havertz's cross as the Bundesliga witnessed its 50,000th goal since its inception in 1963.

Augsburg did have chances and Ja-Cheol Koo should have leveled but Bernd Leno was equal to the task. 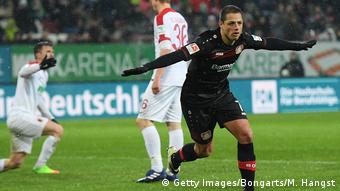 Hernandez has 10 Bundesliga goals this term

His counterpart Marwin Hitz was by far the busier, making a series of good stops but he could do nothing to prevent the second goal.

More neat interplay from Leverkusen exposed a weak Augsburg backline and Hernandez had plenty of time to fire home from close in.

The hosts had the better of the early part of the second period and Dominik Kohr reduced the deficit on the hour but Leverkusen hit back almost immediately.

Again Havertz - just 17-years-old - was instrumental with his skill and Hernandez made a mockery of those questioning his worth by grabbing his second with a clever finish. It was his second brace in as many matches.

That is 10 Bundesliga goals this season for the Mexico striker, who was soon substituted to spare him for Tuesday's Champions League last 16 first leg at home to Atletico Madrid.

Leverkusen are now up to eighth pending the rest of the weekend fixtures and after a terrible spell, coach Schmidt looks to be in the clear for now.

Augsburg meanwhile are going steadily backwards and will be nervously looking over their shoulders.

The 50,000th goal in the history of the Bundesliga was scored by Karim Bellarabi of Bayer Leverkusen on Friday. From Okocha to Hitzlsperger - here are some of the Bundesliga's most memorable goals. (17.02.2017)