Borussia Dortmund saw off Hertha Berlin and kept the heat on Wolfsburg and Eintracht Frankfurt in the race for the top four. Dortmund made it look easier than it was – a sign of progress for the Black and Yellows. 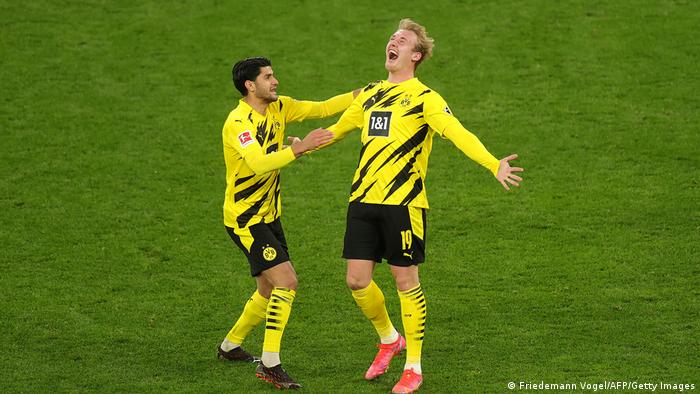 This was the kind of game Borussia Dortmund were losing a month ago. But, stifled by a well-organized Hertha Berlin defense and restricted to just a few big chances, this time they found a way to win to keep their late dash for a top four finish on course. It wasn't vintage by any means, but it was three more points on an afternoon when Dortmund's collective spirit shone through.

The manner of their pitiful defeat in Freiburg in early February prompted Dortmund's chiefs to hasten their announcement of Marco Rose as new coach and offer everyone at the club some stability. Coach Edin Terzic is probably the greatest beneficiary, now afforded the space to coach his players without speculation swirling around.

In truth, it's freed Dortmund in the same way it's condemned Borussia Mönchengladbach. Playing with a freedom and, crucially, trusting their best instincts, Dortmund look more like their old selves again – seemingly at peace with the fact that the title is already well beyond them to the point that it's liberating them.

With Erling Haaland kept at bay for once, Dortmund's inspiration had to come from somewhere. Enter, Julian Brandt.

The Germany forward has struggled to nail down a starting place under Terzic but he dished up a tasty reminder of his ability with a shot that dipped and swerved all over the place, unnerving Rune Jarstein, who ended up fumbling it into his own net.

Brandt was honest about his form and even how the goal went in, at full time: "Maybe the wind played a key role. I was a bit surprised it went in," he told Sky. "It's not been that easy for me recently. With everything that's going on, playing in an empty stadium, of course it affects you. But you try and get yourself back on track, bit by bit, and of course a goal really helps."

And Brandt was optimistic about his team's chances of overhauling Frankfurt and Wolfsburg, both of whom Dortmund still have to face.

"There are some good teams in front of us who are winning the games quite comfortably, but we have a couple of direct games against them where we want to try and make up ground." 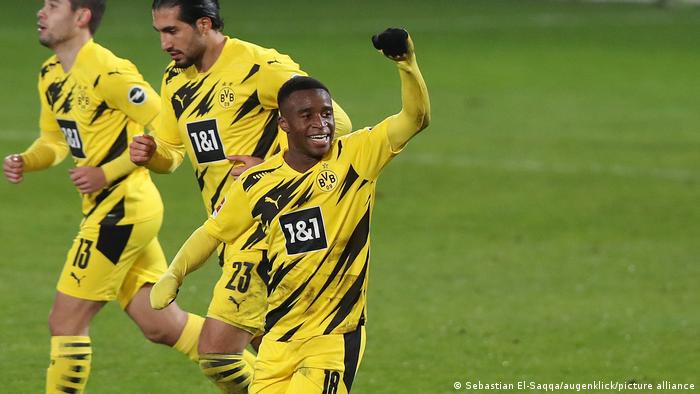 Teenage kicks: Youssoufa Moukoko was on the score sheet again for Borussia Dortmund

Youssoufa Moukoko, fresh off the bench, sealed the win late on, bundling his way through a challenge and slicing the ball into the bottom corner from a tight angle. Another reminder of the instinctual finishing ability of the 16-year-old striker, and Terzic reiterated his admiration for the teenager.

"He extremely dangerous in front of goal," said the interim coach. "Today, we needed someone in the second half who would pose a threat immediately and that's exactly what he did, even with his cross to Gio Reyna before his goal. It was the right moment to bring him on."

Hertha had rocked up in Dortmund alarmingly close to the relegation zone and in need of points to avoid the wind going out of the sails of the Windhorst Project. Such ignominy seems unlikely now that Pal Dardai is back doing what he does best – making Hertha hard to beat – and this wasn't a victory that came easily for Dortmund. Hertha Berlin made life difficult for Dortmund for long periods.

Haaland was largely muted, Marco Reus' influence was restricted to only a few moments, and Dortmund missed Jadon Sancho's ability to unlock the door. Hertha will take heart from that, given that they've taken just eight points from a possible 36 since the turn of the year. Only Gladbach, Schalke and Arminia Bielefeld are in worse form.

However, just when there were signs of the corner being turned under Dardai, the Berliners were undermined by a moment of madness by midfielder Vladimir Darida, who pole-axed Reus with a reckless lunge that ended the Dortmund captain's afternoon and the red card was immediately brandished.

Darida took Hertha's lingering hopes of a point down the tunnel with him and weakens Hertha for the visit of Bayer Leverkusen to the capital next weekend.