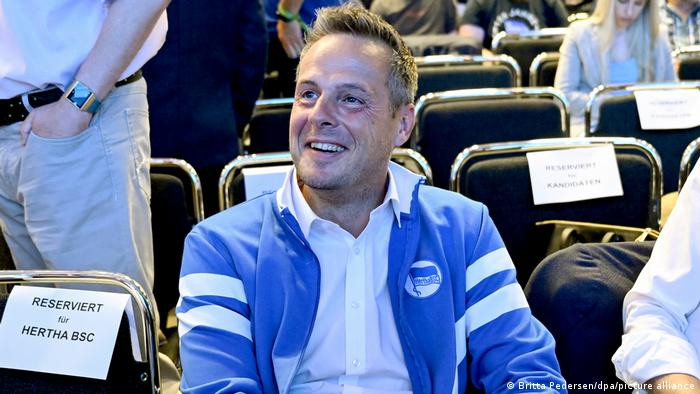 The failure of the conservative politician to win the club presidency is seen as a defeat for the club's establishment and a win for the fan base.

In German football, the ultras are those hardcore, organized supporters who coordinate the atmosphere at matches home and away, and who create the often spectacular choreography and displays in the stands.

While ultras in some countries, particularly in Eastern Europe, are politically right-wing, German ultras tend to be more left-leaning, and often get engaged in sociopolitical campaigns — although they do attract criticism for their frequent use of pyrotechnics.

Club to be 'detoxified'

Bernstein was a founder member of the hardcore Hertha ultra group "Harlekins Berlin '98" and former "capo," the fan who conducts the chants with a megaphone. He is still involved in the club's social projects.

He said Hertha was in "intensive care" but could now be "detoxified from the inside and made healthy."

The new president said he would build a team to help him manage the club, and called for a truce after ongoing infighting affecting the club's fortunes.

The announcement of Bernstein's victory was met with cheers from the club's fans.

Hertha Berlin only narrowly avoided being relegated from the Bundesliga last season after having to face a relegation playoff.

Bernstein is replacing 72-year-old Werner Gegenbauer who has held the post since 2008. Gegenbauer has repeatedly clashed with investor Lars Windhorst, who has pumped €375 million into Hertha over the last two seasons, for little visible reward.

Windhorst had effectively accused Gegenbauer of wasting the money, although supporters held both men responsible for the club's travails.

Hertha Berlin slipped to a deserved derby defeat away at city rivals Union. The pitiful, helpless nature of the performance summed up where the club is in 2021, writes DW's Matt Ford.