In Erftstadt-Bliesheim, the clouds have been replaced by blue sky, the rain by a baking sun — and a picturesque Rhineland village by rubble.

The tiny town between Cologne and Bonn, population 3,600, was devastated by the floods which hit western Germany last week when the small River Erft swelled to historic levels and burst its banks.

Days later, residents are picking through the wreckage, trying to salvage what they can of their livelihoods with the help of the emergency services, local aid organizations and volunteers from near and far. Among them, around 200 supporters of nearby Bundesliga club FC Cologne.

"We want to help people," says Kai, wearing a t-shirt with the message "Zesamme stark blieve" — "stay strong together" in the local dialect — beneath Cologne's club badge. "If you were in this situation, you'd like someone to help you; it's about looking out for your neighbors."

The fans' efforts are being coordinated by the "Coloniacs," one of Cologne's hardcore ultra groups, usually known for their vocal support, flags and choreographies at Bundesliga matches.

On Friday, the group appealed for donations in the form of blankets, shoes, clothing and money. By the next day, over €20,000 ($23,500) had been donated and the group had to ask people to stop donating material goods because they had reached storage capacity. By Wednesday morning, they had collected over €35,000.

The Cologne ultras aren't on their own. Further up the Rhine, the "Ultras Leverkusen" also appealed for donations, saying: "Parts of Leverkusen are currently in the sort of state we have never seen before. Our neighbors, our friends, our family, our city need help."

And in the formerly industrial Ruhr region, Borussia Dortmund supporters from the "Bündnis Südtribüne" — an alliance of fan and ultra groups from the club's famous Yellow Wall — also appealed for help.

By Tuesday, 27 palettes and 90 bags of material had been donated and were on their way to Erftstadt or to Hagen, another badly affected town just to the south of Dortmund.

"Fan groups, especially at BVB, are highly organized and have enormous networks, so they were able to organize a van to take supplies to the crisis region in a short space of time," explains Johannes Bagus from the Fanprojekt Dortmund, a pedagogical organization which works with young football supporters in the city.

"With the support and the reach of Borussia Dortmund, they're able to launch and implement all sorts of social and charitable projects."

Even fans of clubs from non-affected regions have got involved. Hannover fans from the "Rote Kurve" group, for example, are collecting donations and splitting them 50-50 between the Coloniacs in Erftstadt and local aid organizations further south in the state of Rhineland-Palatinate.

"Unfortunately, the public image of ultras is dominated by burning away ends and clashes with the police," says Bagus.

"But if you study their subculture more carefully, you'll see that there's a lot more to them than just 'hooligans.' There are the huge choreographies, the anti-discrimination projects and the aid in crisis situations, but these aspects are often overlooked."

Ultras are not one homogenous group, either. Although generally united by their opposition to what they perceive to be the over-commercialization of modern football, many eastern European ultras can be explicitly right-wing and often violent. Most German ultras, however, tend to be on the political left: critical and uncomfortable but with a strong sense of social responsibility.

"This is a common trait of the ultra movement around the world," says James Montague, author of "Among the Ultras: A journey with the world's most extreme fans."

"Whether it's an earthquake in Croatia, a forest fire in Greece or floods in Germany, ultra groups are often on the front line," he says.

Indeed, when the coronavirus arrived in Germany last spring, forcing cities into lockdowns, ultras from football clubs across the country were among the first groups to organize support for vulnerable people, doing shopping, looking after pets and generally helping out.

"These are extremely well-organized groups, often consisting of physically fit young men," explains Montague. "They have a natural organizational structure and can organize things in a short space of time, from communications to collections to distribution — these things are part and parcel of what they do." 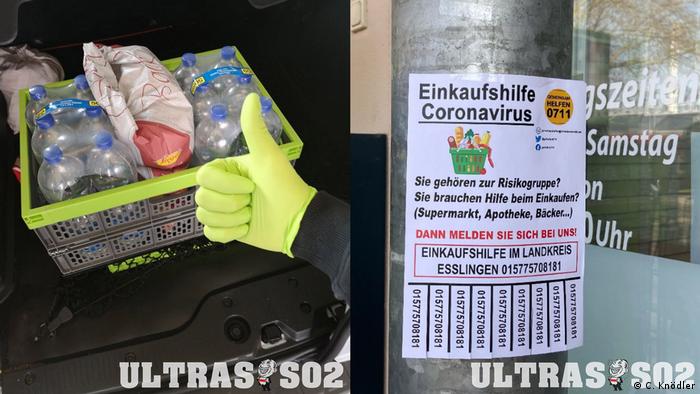 Back in Erftstadt, the Cologne ultras have been deployed around the affected areas, carrying, cleaning, clearing and assisting where they can. They've been here all day, and they'll be back again tomorrow.

"There are so many people out there who you don't even know, I don't even know where they're from," one resident told DW. "But they're out here helping to clean up, there's so much willingness to help, it's wonderful."

For Kai and the others, it's a natural response.

"We could be at home having a barbeque by the pool, but we're here, because that's what we do," he said. "The nasty football fans … well maybe people will see that we're not all bad."

DW talked to people from the tourism and publishing industries in Germany's Ahr valley: They are still recovering from the catastrophic floods that hit the area a year ago.

Opinion: Germany needs to invest in nature to defend against floods 02.02.2022