One of the most memorable Bundesliga weekends saw two fierce derbies, an 8-0 win and a Bayern humbling that cost Niko Kovac his job. Timo Werner, Thorgan Hazard and Union Berlin had a better time of it on Matchday 10. 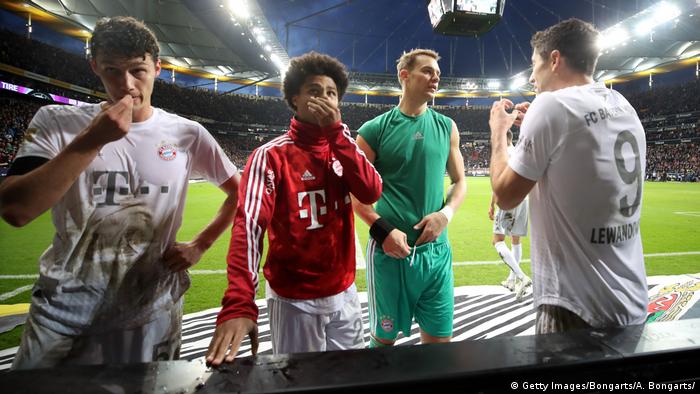 Though this was a weekend packed full of big games, derbies and goals (35 of them in nine games), there's only really one place to start ⁠— Eintracht Frankfurt 5-1 Bayern Munich. The champions haven't lost as heavily in the league for a decade and the way they folded after the early sending off of Jerome Boateng was the final straw that cost Niko Kovac his job. Germany coach Joachim Löw, watching from the stands, will feel vindicated in his decision to end Boateng's international career after his decreasing mobility got him in trouble again. His fellow international outcast Thomas Müller, making his 500th appearance, wasn't much better ⁠— he hasn't scored in the Bundesliga since March. As poor as Bayern were, Frankfurt were excellent, with five different goalscorers and some exceptional one touch football. They're coping well with the Europa League workload and the departure of last season's star attacking trio.

RB Leipzig seem to be over their sticky patch. Die Roten Bullen had gone four league games without a win ahead of the visit of Mainz on Saturday but, after a 6-1 demolition of Wolfsburg in the cup on Wednesday, they were in destructive mood again. This 8-0 win featured a number of strong displays but Timo Werner stood out. Following two goals and two assists against Wolfsburg, he registered three of each against Mainz. At this rate, Hertha Berlin are in big trouble next week.

Hertha didn't exactly enjoy this weekend either, with a late Dedryck Boyata challenge allowing Sebastian Polter to settle the first Bundesliga Berlin derby since the mid 70s and the first meeting of Hertha Berlin and Union Berlin in the top flight. The newly-promoted side are now just a point off their more established counterparts. Over on the other side of Germany on Sunday, Fortuna Düsseldorf beat hapless Cologne 2-0 in the first meeting of the Rhine rivals for 22 years.

Borussia Dortmund made things comfortable for their fans for a change. While BVB took their time to get the breakthrough against Wolfsburg, once Thorgan Hazard got his first goal for the club, it was plain sailing. But Marco Reus' departure in the first half with an injury is a significant cloud on the horizon and the club say he will be assessed ahead of the crucial visit of Inter Milan on Tuesday.

Werder Bremen are becoming the league's draw specialists. Nils Petersen's late headed equalizer meant Freiburg snatched a 2-2, the fourth time in the last five games Bremen have produced that scoreline — the other was 1-1. While Bremen goalkeeper Jiri Pavlenka could possibly have done better with Petersen's second, he made a right mess of the striker's first, dwelling on the ball in his box for an age before being dispossesed.

"You can't concede five here, but it's not a massive shock. It's sort of been coming. The next few days could be quite turbulent."
- Manuel Neuer has been around the Bayern block long enough to know what to expect.

"I think at this point in time it's the right decision for the club. The results and way we have been playing recently have brought me to this conclusion."
- Niko Kovac on parting ways with Bayern.

"The fans can have it large – they should enjoy it and as far as I’m concerned, they can party for three days."
- Frankfurt sporting director Fredi Bobic gets the party started.

"We showed no resilience and couldn’t get hold of the ball. If you do that you suffer a shower of goals, like we did today. "
- Mainz's Sandro Schwarz was considerably less impressed with his side.

"We have to work together as a team and not rely so much on individuals."
Kevin Volland on his Bayer Leverkusen team, who are without a win in four league games.

Bayern Munich haven't kept a clean sheet in their last eight games but at least they have a genuine threat up top. Robert Lewandowski has still scored in every game in the Bundesliga this season, he has 14 in 10 games.

Timo Werner's hat-trick of goals and assists was the joint most goal involvements in a game since Opta began collecting such data in 2004-5. The only other such instance of six involvements was Claudio Pizarro in 2013.

The first meeting of Union and Hertha Berlin in the top flight wasn't much of a game but there were plenty of talking points on the terraces, as Matt Ford explains here.

Niko Kovac oversaw Bayern Munich's heaviest league defeat in a decade and the champions are four points off the pace. It's not all his fault but he's under pressure and doing himself no favors, thinks DW's Matt Pearson. (02.11.2019)