After a 5-1 defeat by Eintracht Frankfurt, Niko Kovac has left Bayern Munich by mutual consent. The coach has paid the price for a disappointing start to Bayern's Bundesliga campaign despite winning the double last year. 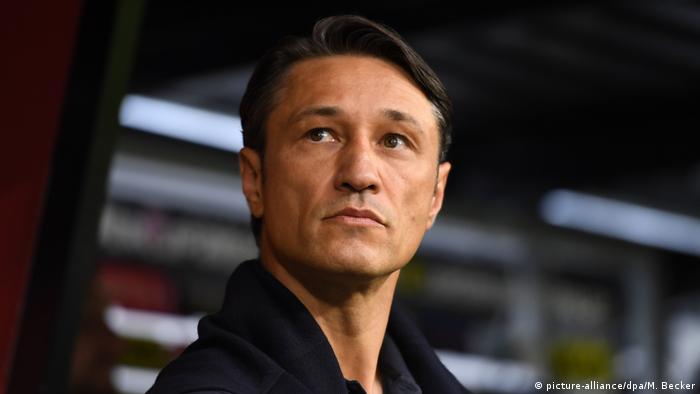 Rumors surrounding Niko Kovac's departure started circling on Sunday evening, only for the club to confirm that they'd agreed to relieve the head coach of his duties with a tweet that read simply: "FC Bayern parts ways with Niko Kovac."

Saturday's major defeat to Eintracht Frankfurt, Bayern's heaviest for a decade, saw the champions slip to fourth in the table, and the Croatian coach has paid the price.

"I think at this point in time it's the right decision for the club," said Kovac, who coached Frankfurt before Bayern. "The results and way we have been playing recently have brought me to this conclusion. My brother Robert and I thank FC Bayern for the last year and a half."

The club confirmed assistant coach Hansi Flick, who returned to the club staff earlier this year, will take charge of the team for Wednesday's Champions League clash with Olympiacos and Saturday's crucial league match with Borussia Dortmund.

"The performance of our team in recent weeks and the results have shown us that there was need for action," said club CEO Karl-Heinz Rummenigge.

"Uli Hoeness [president], Hasan Salihamidzic [sporting director] and I had an open and serious conversation with Niko on Sunday with the consensual result that Niko is no longer coach of Bayern," he said. "We all regret this development. I would like to thank Niko Kovac on behalf of FC Bayern for his work, especially for winning the double this past season."

After a difficult start to his tenure last term, Kovac went on to win the Bundesliga and the German Cup, though Bayern exited the Champions League to eventual winners Liverpool in the last 16.

Bayern have won the last seven Bundesliga titles but have now had three coaches, including the temporary return of Jupp Heynckes in 2017-18, in the last three years. Kovac's reign of 490 days was longer than that of his permanent predecessor Carlo Ancelotti by 36 days.

Former Bayern great Bastian Schweinsteiger has told a German newspaper it may be time for Thomas Müller to move on. Schweinsteiger also had his say on the future of Niko Kovac and Jose Mourinho's Bundesliga interest. (03.11.2019)