Borislav Mihaylov, the president of Bulgaria's football association, has resigned. Bulgaria's prime minister had earlier called on him to quit after home fans racially abused England players in a Euro 2020 qualifier. 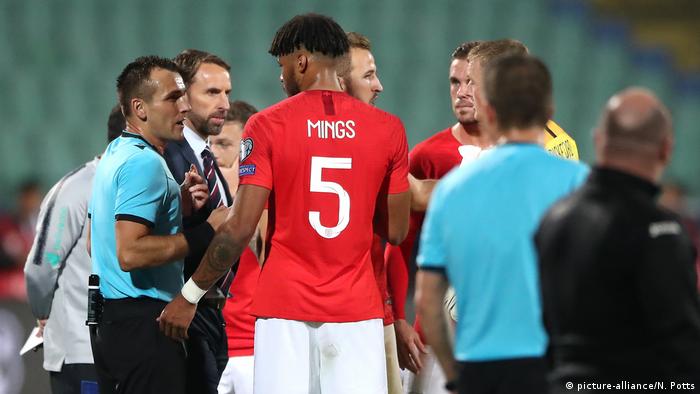 Borislav Mihaylov on Tuesday stepped down as president of the Bulgarian Football Union (BFU), hours after the country's prime minister urged him to quit.

The BFU issued a short statement saying the decision was "a consequence of recent tensions" that followed England's 2020 qualifier in Sofia on Monday.

Bulgarian Prime Minister Boyko Borissov had earlier called on the national soccer chief to resign. The appeal came after Bulgaria's Euro-2020 qualifying match against England in Sofia was nearly abandoned because of racist abuse from fans.

The match, which England eventually won 6-0, was temporarily halted twice in the first half because of racist abuse and monkey chants directed at England's black players. Some in the crowd were also seen making Nazi salutes.

Some 50 Bulgarian fans, who were wearing black, left the stadium before halftime. The second half of the match was completed without further stoppages.

UEFA on Tuesday said it was beginning disciplinary proceedings against the Bulgarian Football Union on four charges, and against the English Football Association on two lesser charges.

The Bulgarian premier said national football association chief Borislav Mihaylov had to take responsibility for an incident that had shamed Bulgaria.

"It is unacceptable to link Bulgaria... a tolerant country of different ethnicities and religions living together in peace, with racism and xenophobia," he said.

Borisov also appeared less than impressed with the result of the match, which he described as a "shameful loss."

He had ordered Sports Minister Krasen Kalev to withdraw all financial help from the Bulgarian football association until Mihaylov stood down.

Three of England's players — Raheem Sterling, Marcus Rashford and Tyrone Mings — were targeted with the abuse. In a tweet, Sterling welcomed Borissov's demand for the soccer chief to quit.

For his part, Mings, who had been making his debut, said he was proud of the players' reaction on the pitch in light of the abuse.

The game was already being played partially behind closed doors. European governing body UEFA had ordered blocks of seats to be cordoned off because of fans' racism in previous matches against both Kosovo and the Czech Republic in June.

Bulgaria can now expect further sanctions against it, which might include a hefty fine and possible stadium closure for one or more matches. Although the team can no longer secure a place in the Euro 2020 tournament through normal qualifying, it is already guaranteed a playoff spot in March next year for winning its UEFA Nations League group.

England footballers may walk off the pitch against Bulgaria if they hear racism from the stands. Part of the stadium in Sofia will be closed after previous incidents but officials feel their country is being denigrated. (11.10.2019)

Three Chelsea fans were rejected from a game in Prague on Thursday night after racist singing in a bar. The Blues have long struggled with a right-wing faction among its support, but the problem goes beyond West London. (12.04.2019)